A limnic eruption, also known as a lake overturn, is a rare type of natural disaster in which dissolved carbon dioxide (CO
2) suddenly erupts from deep lake waters, forming a gas cloud capable of suffocating wildlife, livestock, and humans. A limnic eruption may also cause tsunamis as the rising CO
2 displaces water. Scientists believe earthquakes, volcanic activity, and other explosive events can serve as triggers for limnic eruptions. Lakes in which such activity occurs are referred to as limnically active lakes or exploding lakes. Some features of limnically active lakes include:

Investigations of the Lake Monoun and Lake Nyos casualties led scientists to classify limnic eruptions as a distinct type of disaster event, even though they can be indirectly linked to volcanic eruptions. 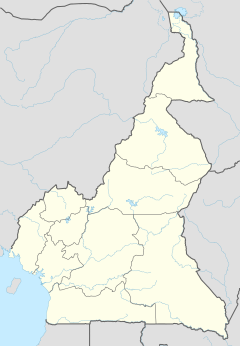 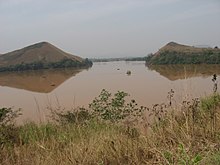 Lake Monoun situated in the West Region of Cameroon

Due to the largely invisible nature of the underlying cause (CO2 gas) behind limnic eruptions, it is difficult to determine to what extent eruptions have occurred in the past. In recent history, this phenomenon has been observed twice. The first recorded limnic eruption occurred in Cameroon at Lake Monoun in 1984, causing asphyxiation and death of 37 people living nearby. A second, deadlier eruption happened at neighboring Lake Nyos in 1986, this time releasing over 80 million m3 of CO2, killing around 1,700 people and 3,500 livestock, again by asphyxiation.

A third lake, Lake Kivu, rests on the border between the Democratic Republic of the Congo and Rwanda, and contains massive amounts of dissolved CO2. Sediment samples from the lake taken showed an event caused living creatures in the lake to go extinct around every 1000 years, and caused nearby vegetation to be swept back into the lake. Limnic eruptions can be detected and quantified on a CO2 concentration scale by taking air samples of the affected region.

The Messel pit fossil deposits of Messel, Germany, show evidence of a limnic eruption there in the early Eocene. Among the victims are perfectly preserved insects, frogs, turtles, crocodiles, birds, anteaters, insectivores, early primates, and paleotheres.

For a lake to undergo a limnic eruption, the water must be nearly saturated with gas. CO2 was the primary component in the two observed cases (Lake Nyos and Lake Monoun). In Lake Kivu, scientists[who?] are concerned about the concentrations of methane gas as well. CO2 may originate from volcanic gas emitted from under the lake or from decomposition of organic material. Before a lake is saturated, it behaves like an unopened carbonated beverage (e.g., a soft drink): the CO2 is dissolved in the water. In both the lake and the soft drink, CO2 dissolves much more readily at higher pressure (Henry's law). This is why bubbles in a can of soda form only after the can is opened; when the pressure is released, the CO2 comes out of solution. In the case of lakes, the bottom is at a much higher pressure; the deeper it is, the higher the pressure is at the bottom. Therefore, huge amounts of CO2 can be dissolved in large, deep lakes. CO2 also dissolves more readily in cooler water, such as that found at a lake bottom. A small rise in water temperature can lead to the release of a large amount of CO2.

Once a lake is saturated with CO2, it is very unstable, but a trigger is needed to set off an eruption. In the case of the 1986 Lake Nyos eruption, landslides were the suspected triggers, but a volcanic eruption, an earthquake, or even wind and rain storms are potential triggers. Another possible cause of a limnic eruption is gradual gas saturation at specific depths which can trigger spontaneous gas development. For any of these cases, the trigger pushes some of the gas-saturated water higher in the lake, where pressure is insufficient to keep CO2 in solution. As bubbles start forming the water is lifted even higher in the lake (buoyancy), where yet more CO2 comes out of solution. This process forms a column of gas, at which point the water at the bottom of this column is pulled up by suction, and it, too, loses CO2 in a runaway process. This eruption discharges CO2 into the air and can displace enough water to form a tsunami.

Limnic eruptions are exceptionally rare for several reasons. First, a CO2 source must exist (regions with volcanic activity are most at risk). Second, the vast majority of lakes are holomictic (i.e., their layers mix regularly), preventing a buildup of dissolved gases. Only meromictic lakes do not mix and remain stratified, allowing CO2 to remain dissolved. It is estimated only one meromictic lake exists for every 1,000 holomictic lakes. Finally, a lake must be deep enough to have sufficient pressure to dissolve large amounts of CO2. 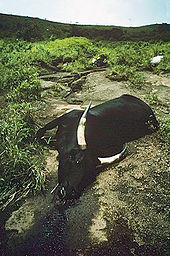 Bovine killed by the 1986 limnic eruption at Lake Nyos

Once an eruption occurs, a large CO2 cloud forms above the lake and expands to the surrounding region. Because CO2 is denser than air, it has a tendency to sink to the ground, simultaneously displacing breathable air, resulting in asphyxia. CO2 can make human bodily fluids highly acidic and potentially cause CO2 poisoning. As victims gasp for air, they actually accelerate asphyxia by inhaling CO2 gas.

At Lake Nyos, the gas cloud descended into a nearby village where it settled, killing nearly everyone; casualties as far as 25 km (16 mi) were reported. A change in skin color on some bodies led scientists to hypothesize the gas cloud may have contained dissolved acid such as hydrogen chloride, though this hypothesis is disputed. Many victims were found with blisters on their skin, thought to have been caused by pressure ulcers, which were likely caused by low blood oxygen levels in those asphyxiated by carbon dioxide. Nearby vegetation was largely unaffected, except any growing immediately adjacent to the lake. There, vegetation was damaged or destroyed by a 24 m (79 ft) high tsunami caused by the violent eruption.

Efforts are under way to develop a solution for removing the gas from these lakes and to prevent a build-up which could lead to another catastrophe. A team led by French scientist Michel Halbwachs began experimenting at Lake Monoun and Lake Nyos in 1990 using siphons to degas the waters of these lakes in a controlled manner. The team positions a pipe vertically in the lake with its upper end above the water surface. Water saturated with CO2 enters the bottom of the pipe and rises to the top. The lower pressure at the surface allows the gas to come out of solution. Only a small amount of water must be mechanically pumped initially through the pipe to start the flow. As saturated water rises, the CO2 comes out of solution and forms bubbles. The natural buoyancy of the bubbles draws the water up the pipe at high velocity resulting in a fountain at the surface. The degassifying water acts like a pump, drawing more water into the bottom of the pipe, and creating a self-sustaining flow. This is the same process which leads to a natural eruption, but in this case it is controlled by the size of the pipe.

Each pipe has a limited pumping capacity and several would be required for both Lake Monoun and Lake Nyos to degas a significant fraction of the deep lake water and render the lakes safe. The deep lake waters are slightly acidic due to the dissolved CO2 which causes corrosion to the pipes and electronics, necessitating ongoing maintenance. There is some concern CO2 from the pipes could settle on the surface of the lake forming a thin layer of unbreathable air and thus potentially causing problems for wildlife.

In January 2001, a single pipe was installed by the French-Cameroonian team on Lake Nyos, and two more pipes were installed in 2011 with funding support from the United Nations Development Programme. A pipe was installed at Lake Monoun in 2003 and two more were added in 2006. These three pipes are thought to be sufficient to prevent an increase in CO2 levels, removing approximately the same amount of gas that naturally enters at the lake bed. In January 2003, an 18-month project was approved to fully degas Lake Monoun, and the lake has since been rendered safe.

There is some evidence that Lake Michigan in the United States spontaneously degasses (the colloquial term used is "burps") on a much smaller scale each fall.

Satellite image of Lake Kivu in 2003

Lake Kivu is not only about 1,700 times larger than Lake Nyos, but is also located in a far more densely populated area, with over two million people living along its shores, and the part within the Democratic Republic of the Congo is a site of active armed conflict and low state capacity for the DRC government. Lake Kivu has not reached a high level of CO2 saturation yet; if the water were to become heavily saturated, a limnic eruption would pose a great risk to human and animal life. Two significant changes in Lake Kivu's physical state have brought attention to a possible limnic eruption: the high rates of methane dissociation and a rising surface temperature. Research investigating historical and present-day temperatures show Lake Kivu's surface temperature is increasing by about 0.12 °C per decade. Lake Kivu is in close proximity to potential triggers: Mount Nyiragongo (an active volcano which erupted in January 2002), an active earthquake zone, and other active volcanoes.

While the lake could be degassed in a manner similar to Lake Monoun and Lake Nyos, due to the size of Lake Kivu and the volume of gas it contains, such an operation would be expensive, running into the millions of dollars. A scheme initiated in 2010 to use methane trapped in the lake as a fuel source to generate electricity in Rwanda has led to a degree of CO2 degassing. During the procedure for extracting the flammable methane gas used to fuel power stations on the shore, some CO2 is removed in a process known as catalyst scrubbing. It is unclear whether enough gas will be removed to eliminate the danger of a limnic eruption at Lake Kivu.