Lionel Eugene Hollins (born October 19, 1953) is an American professional basketball coach and former player who is an assistant coach for the Los Angeles Lakers of the National Basketball Association (NBA). He played for the Portland Trail Blazers, winning an NBA championship in 1977 and named an NBA All-Star in 1978. The Trail Blazers retired his No. 14. 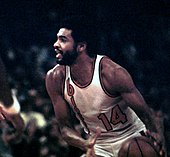 Hollins was a key member of the Trail Blazers' 1976–77 championship team.

During his ten-year NBA career playing as a point guard he played for five teams, averaging 11.6 points and 4.5 assists per game. In 1974 Lionel suffered a serious injury from a moped crash when a bicyclist collided. Fortunately this did not affect his career, but ultimately his left pinky and ring finger never healed correctly.

Drafted by the Portland Trail Blazers with the sixth pick of the 1975 NBA draft out of Arizona State University, Hollins was bestowed All-Rookie first team honors that season, averaging 10.8 points in 78 games for the Blazers. Prior to his two seasons at Arizona State, he played two years at Dixie College in St. George, Utah.

He graduated from Arizona State University in 1986 with a degree in sociology.

In the 1999–2000 season, Hollins acted as the interim head coach while the Grizzlies were still located in Vancouver. He served another stint as interim coach of the Grizzlies in 2004, after the team had moved to Memphis.

Hollins served as head coach for the St. Louis SkyHawks of the United States Basketball League (USBL) in 2002.

On May 14, 2008, Hollins was hired as one of Milwaukee Bucks head coach Scott Skiles' assistants.

On January 25, 2009, Hollins was named the Grizzlies' head coach for the third time in the franchise's history.

On February 11, 2011, Hollins won his 100th career victory, as coach of the Memphis Grizzlies, in an 89–86 victory over the Milwaukee Bucks. That season, he led his team to a 46–36 record, earning the eighth seed in the playoffs. The Grizzlies defeated the number-one seed San Antonio Spurs before losing to the Oklahoma City Thunder in seven games in the Western Conference semifinals.

In the lockout-shortened 2011–12 NBA season, Hollins' Grizzlies finished the season with a 41–25 record and the best winning percentage in franchise history (.621). After guiding the Grizzlies to a 13–3 record during the month of April, Hollins was named April's Coach of the Month. This streak helped the Grizzlies earn the four seed in the Western Conference, with home court advantage for the first time in franchise history. They lost in the first round to the Los Angeles Clippers in seven games. In 2012–2013, Hollins led Memphis to a franchise record 56-win season. Memphis lost to the San Antonio Spurs in the Western Conference Finals in a four-game sweep. Differing views between Hollins and management seemed to be pointing to an eventual change despite Hollins' success.

Even though it was announced that Hollins' contract would not be renewed by the team on June 10, 2013, he was still the Grizzlies' most successful coach, having improved the team's record almost every season. He led them to three straight playoff appearances, their first playoff win, a franchise best .683 winning percentage, and the first playoff series victory in franchise history. .

In the time between Memphis and Brooklyn, Hollins chose Kauffman Sports Management Group as his representation.

On July 2, 2014, Hollins and the Brooklyn Nets reached an agreement for him to serve as the team's head coach for the next four seasons. On July 7, 2014, he was officially introduced by the Nets at a press conference. In his first season as head coach, he guided the Nets to the playoffs. On January 10, 2016, he was relieved of his head coaching duties by the Nets after starting the 2015–16 season with a 10–27 record.

On July 31, 2019, the Los Angeles Lakers hired Hollins as an assistant coach. Hollins won his 2nd championship on October 11, 2020 when the Lakers defeated the Miami Heat in the 2020 NBA Finals in 6 games.