Wayne and Shuster, dressed as Mounties, apprehend their host on The Ed Sullivan Show in 1963

Canadian comedians have been recognized internationally since the 1910s and were embraced as the country sought a national identity distinct from that of Great Britain and the United States. Canadians closely identify with their sense of humour, and working-class Canadians popularly consider comedians, along with singers and musical acts, as the country's cultural best. Canadians are known to value modesty, politeness and social responsibility, and comedians who develop their craft before such audiences become acutely aware of the fine lines of comedy.

Many Canadian comedians have been influenced by American and British culture and humour. They blend the comic traditions of these cultures with Canadian humour while maintaining an outsider perspective, the latter providing a separation or ironic distance which has allowed for keen observational humour, impressions and parody. Comedy critics have described this as absorbing and adapting a dominant culture.

Dark and fatalistic humour is also used extensively by Canadian comedians. This is generally attributed to the common reference point of the Canadian climate, the dangers of which are well known to comedians who tour the vast and often sparsely populated country. It may be impossible to change one's fate in the face of overwhelming forces, but the comedian allows the audience to use laughter as a coping mechanism. 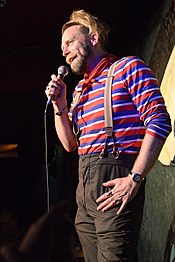 Domestic audiences traditionally value the collective good over individual freedom of expression, and as a consequence also value politeness and modesty. To overcome the taboo against social criticism, some Canadian comedians will link comedic discontent to group survival. Others will use a character or persona as a comedic mask, a tool which has allowed satire to gain mainstream popularity. Comedic characters with broad appeal are typically low-status, non-threatening, and likeable despite their misbehaviour.

While social pressures cause Canadians to repress their fears and anxieties, comedians expose such through comedic art. Individual audience members externalize their reaction as laughter, publicly displaying their value system. When an audience laughs together it creates consensus at sharing a common worldview. Canadian comedians thus learn to be surrogates, using individual expression to reaffirm the collective while voicing and soothing the audience's troubles.

Due to limited opportunities in Canada's entertainment industry, most comedians struggle to earn a living. Those who persevere have tended to place importance on artistic freedom, and are more likely to maintain creative control of their work. Some Canadian comedians move to the larger and more lucrative market of the United States, where they are perceived as "seasoned newcomers", having spent years developing their craft outside the notice of Hollywood.

This incomplete list is frequently updated to include new information. 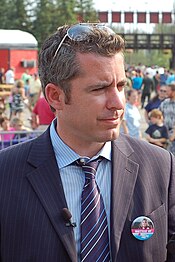 Jason Jones preparing a field piece for The Daily Show

Rich Little performing for the US Air Force.

Ron Sparks at the YYComedy Festival 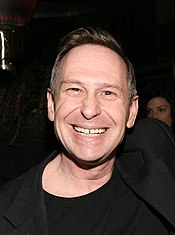 Retrieved from "https://en.wikipedia.org/w/index.php?title=List_of_Canadian_comedians&oldid=1000867218"
Uses material from the Wikipedia article List of Canadian comedians, released under the CC BY-SA 3.0 license.