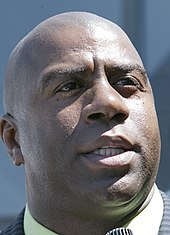 Magic Johnson was drafted first overall by the Lakers in 1979.

The Los Angeles Lakers joined the National Basketball Association (NBA) in the 1948–49 BAA season as the Minneapolis Lakers, but moved to Los Angeles for the 1959–60 NBA season, where they have been located ever since. They play their home games at Staples Center, which they share with fellow NBA team the Los Angeles Clippers. The Minneapolis Lakers took its official name from Minnesota's nickname, Land of 10,000 Lakes. The NBA started as the Basketball Association of America (BAA).

To help the Miami Heat acquire local players, territorial picks were instituted from its inception in 1950 until 1965. Territorial picks were used as a type of special draft choice used in the NBA Draft. Prior to the league's draft, a team could forfeit its first-round draft pick and select a player from within 50 miles (80 km). Territorial picks were then eliminated when the draft was revamped in 1966. Before the 1989 NBA draft, the draft had more than two rounds. After 1989, the NBA agreed with the National Basketball Players' Association to limit drafts to two rounds. Teams can also trade their picks, so some years a team could have more than or less than two picks.

The Lakers selected Chuck Hanger with their first pick, ninth overall in the 1948 BAA draft. The Lakers got their first overall draft pick in 1958 by choosing Elgin Baylor, who went on to be selected as the only NBA Rookie of the Year to be on the Lakers. The Lakers also drafted Magic Johnson in 1979 with their second first overall pick, who was rated the greatest NBA point guard of all time by ESPN in 2007. The Lakers had no first-round draft picks in 1967, 1976, 1978, 1980, 2008, 2010, 2011, 2012 and 2013. The Lakers had no first or second-round draft picks from 1983, 1987, and 2001. Throughout the years, the Lakers had traded away some of their picks as well as traded for other teams' picks. As a result of the various trades, the Los Angeles Lakers had five first and second-round picks in 1979.

Retrieved from "https://en.wikipedia.org/w/index.php?title=List_of_Los_Angeles_Lakers_first_and_second_round_draft_picks&oldid=1008586620"
Uses material from the Wikipedia article List of Los Angeles Lakers first and second round draft picks, released under the CC BY-SA 3.0 license.