List of beaches in the Cape Town metropolitan region 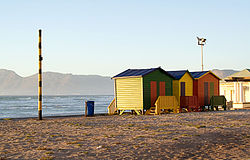 The Cape Metropole (greater Cape Town) has a wide variety of beaches divided into three regions by the Cape Peninsula:

The sea in False Bay is about 6 degrees warmer than the Atlantic Seaboard and the West Coast.

In 2011, Lonely Planet listed Cape Town second in its list of the world's top 10 beach cities. 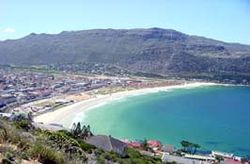 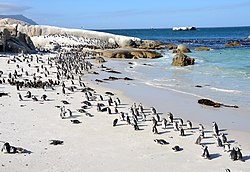 A long sandy beach runs more or less uninterrupted for the complete width of False Bay from Muizenberg to Gordon's Bay, forming the coast of the Cape Flats. Along the rocky Cape Peninsula, there are several smaller beaches below the mountains which are more protected from westerly swells than the beaches of the north shore. There is also a long sandy beach on the east side of the bay at the foot of the Kogelberg.

West coast of the Cape Peninsula 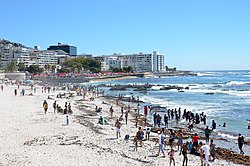 The Atlantic side of the Cape Peninsula faces West and thus is popular for expensive homes facing the sunset views. There are many beautiful beaches below the mountains of the peninsula.

The West Coast beaches are long, sandy beaches to the North of Cape Town. The wind and surf conditions make these beaches popular for surfing and kite-surfing.

Retrieved from "https://en.wikipedia.org/w/index.php?title=Beaches_of_Cape_Town&oldid=1004789109"
Uses material from the Wikipedia article Beaches of Cape Town, released under the CC BY-SA 3.0 license.