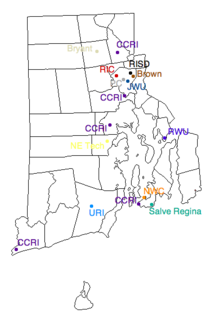 This is a list of colleges and universities in the U.S. state of Rhode Island. There are currently 12 accredited, degree-granting institutions operating in the state, including two research universities, a community college, and a school of art.

The state's three public institutions are administered by the Rhode Island Board of Governors for Higher Education. The state operates two public universities, the University of Rhode Island and Rhode Island College, as well as the Community College of Rhode Island, which offers degrees at six locations. The Naval War College, operated by the federal United States Navy, is located in Newport. The oldest school in the state is Brown University, a member of the Ivy League and the only Rhode Island institution founded before the American Revolution. The newest fully accredited school is the Community College of Rhode Island, founded in 1964 in Providence as Rhode Island Junior College. The newest degree granting institution is College Unbound, founded in 2010 with a focus on adult learners. Located in Providence, College Unbound received candidacy for accreditation from the New England Commission of Higher Education in 2018 (formerly the New England Association of Schools and Colleges). Enrollment sizes range from the Naval War College at 550 students to the University of Rhode Island, the state's flagship public university, which serves over 15,000 students.

The institutions included on this list are all accredited by the New England Association of Schools and Colleges.

^a The types listed here are as categorized in the Carnegie Classification of Institutions of Higher Education.

^b Enrollment is the total enrollment listed by IPEDS for fall 2016.

^c The enrollment count for Johnson & Wales University does not include 799 students in their distance learning programs.

^d The Naval War College is not categorized by the Carnegie Classification. However, it is comparable to the Naval Postgraduate School, which is categorized as a masters university.

^e The enrollment count for the Naval War College does not include 5,116 students in their distance learning programs.

^f The enrollment count for Roger Williams University includes 431 students at the School of Law, which is listed as a separate school in IPEDS.

Retrieved from "https://en.wikipedia.org/w/index.php?title=List_of_colleges_and_universities_in_Rhode_Island&oldid=992454919"
Uses material from the Wikipedia article List of colleges and universities in Rhode Island, released under the CC BY-SA 3.0 license.