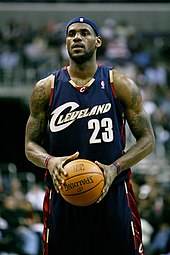 LeBron James, drafted out of high school, was one of the most anticipated first overall draft picks.

The National Basketball Association's first overall pick is the player who is selected first among all eligible draftees by a team during the annual National Basketball Association (NBA) draft. The first pick is awarded to the team that wins the NBA draft lottery; in most cases, that team had a losing record in the previous season. The team with the first pick attracts significant media attention, as does the player who is selected with that pick.

China's Yao Ming (2002) and Italy's Andrea Bargnani (2006) are the only two players without competitive experience in the United States to be drafted first overall. Eleven other international players with U.S. college experience have been drafted first overall—Mychal Thompson (Bahamas) in 1978, Olajuwon (Nigeria) in 1984, Patrick Ewing (Jamaica) in 1985, Duncan (U.S. Virgin Islands) in 1997, Michael Olowokandi (Nigeria) in 1998, Andrew Bogut (Australia) in 2005, Irving (Australia) in 2011, Anthony Bennett (Canada) in 2013, Andrew Wiggins (Canada) in 2014, Ben Simmons (Australia) in 2016, and Deandre Ayton (Bahamas) in 2018. Duncan is an American citizen, but is considered an "international" player by the NBA because he was not born in one of the fifty states or the District of Columbia. Ewing had dual Jamaican-American citizenship when he was drafted and Kyrie Irving and Simmons had dual Australian-American citizenship when they were drafted.