Antique bicycles, at the 2005 New Year's Day Parade, in Whitehall

The London New Year's Day Parade (LNYDP) is an annual parade through the streets of the West End of London on 1 January. The parade first took place in 1987, as the Lord Mayor of Westminster's Big Parade. The parade was renamed in 1994, and for 2000 only it was called the Millennium Parade.

The London parade is the biggest New Year's Day street event of its kind. It attracts around a million spectators, and there is ticket-only seating at various points along the route.

The parade route is two miles (3.2 km) long. Before 2010 it began at Parliament Square in Westminster, continuing along Parliament Street and Whitehall to Trafalgar Square. It then continued along Cockspur Street and Regent Street. The final section was along Piccadilly and the parade ended at Green Park.

In 2010 the parade route was reversed to "appease US television broadcasters" and to "give the American audience the best views of the capital's landmarks, such as the Elizabeth Tower of the Palace of Westminster (The Houses of Parliament, also known as Big Ben) and Trafalgar Square". The revised route started at the Ritz Hotel, along Piccadilly to Piccadilly Circus, down Regent Street, then along Pall Mall to Trafalgar Square, then along Whitehall to Parliament Square.

The parade is used to raise funds for charities in London and representatives from each of the 32 London boroughs are encouraged to take part as a "borough entry", judged as part of the event. The winning entry in the 2017 parade was the City of Westminster with the entry titled Mary Poppins. 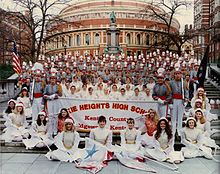 The Pride of New Mexico Marching Band from New Mexico State University was the first collegiate marching band to participate in the parade. The band, under the direction of George Hattendorf, marched in the first Lord Mayor of Westminster's Big Parade in 1987. The Marching 97 of Lehigh University performed in 2018.

The Shawnee Mission West High School marching band from Overland Park, Kansas, USA, has marched in the parade nine times. The 130-member Dixie Heights High School Marching Colonels from Edgewood, Kentucky performed in the parade in 1991 led by Band Director Daryl Angel. The 240-member Walker Valley High School Band from Cleveland, Tennessee, directed by Alan Hunt, and the vocal ensemble from the same school, marched in the 2007 parade. The vocal ensemble was also honoured by being asked to start the parade off by singing the British national anthem. The 140-member marching band from Fort Myers High School in Florida, USA, were initially prohibited from taking part in the 2007 parade because US education officials feared they might be caught in a terrorist attack. The decision was later overruled. The school also hosted the two winners of that year's BBC London competition.

The Clinton High School band from Clinton, Tennessee performed in the 2003 parade.

In 2010, the Legacy_High_School_(Broomfield,_Colorado) Lightning Marching Band performed in the parade.

In 2019, The Pride of the Treasure Coast, the Vero Beach Fighting Indians Band from Vero Beach, Florida performed in the parade.

In 2020, the Lake Nona High School Sound of the Lions from Orlando, Florida performed.

In 2022, the Santa Fe High School marching band from Edmond, Oklahoma will perform.

Over 200 Scouts from across London, led by the Enfield District Scout Band, took part in the 2007 parade, heralding the start of the UK's "2007 Centenary of Scouting Celebrations".

London's town crier is also part of the parade.

In 2021, the British K-pop girl group Kaachi, performed on the parade, virtually.