Lorne Michaels CC (born Lorne David Lipowitz; November 17, 1944) is a Canadian-American comedian, television producer and screenwriter best known for creating and producing Saturday Night Live and producing the Late Night series (since 1993), The Kids in the Hall (from 1989 to 1995) and The Tonight Show (since 2014).

He has received 19 Primetime Emmy Awards from 91 nominations, holding the record for being the most nominated individual in the award show's history.

Lorne Michaels was born on November 17, 1944, to Florence (née Becker) and Henry Abraham Lipowitz. His place of birth is disputed; multiple sources have said he was born in Toronto, Ontario, while others state he was born on a kibbutz in British-mandate Palestine (now Israel) and that his Jewish family emigrated to Toronto when he was an infant.

Michaels and his two younger siblings were raised in Toronto; he attended Forest Hill Collegiate Institute. He graduated from University College, Toronto, where he majored in English, in 1966. Michaels became a US citizen in 1987 and was inducted into the Order of Canada in 2002.

Michaels has three children and has been married three times. During the early 1960s, he began a relationship with Rosie Shuster, daughter of his comedy mentor Frank Shuster of the Wayne and Shuster comedy team, who later worked with him on Saturday Night Live as a writer. Michaels and Shuster were married in 1971 and divorced in 1980. He married model Susan Forristal in 1981, which ended in divorce in 1987. Michaels married his current wife and former assistant, Alice Barry, in 1991.

Michaels began his career as a writer and broadcaster for CBC Radio. He moved to Los Angeles from Toronto in 1968 to work as a writer for Rowan & Martin's Laugh-In and The Beautiful Phyllis Diller Show. He starred with Hart Pomerantz in The Hart and Lorne Terrific Hour, a Canadian comedy series that ran briefly in the early 1970s. 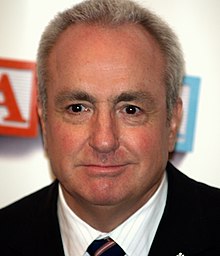 Michaels at the 2008 Tribeca Film Festival.

In 1975, Michaels created (with fellow NBC employee Dick Ebersol and president of the network Herb Schlosser) the TV show NBC's Saturday Night, which in 1977 changed its name to Saturday Night Live (initially there was a name conflict with an ABC show titled Saturday Night Live with Howard Cosell, which debuted September 20, 1975, and was cancelled on January 17, 1976). The show, which is performed live in front of a studio audience, immediately established a reputation for being cutting-edge and unpredictable. It became a vehicle for launching the careers of some of the most successful comedians in the United States.

Originally the producer of the show, Michaels was also a writer and later became executive producer. He occasionally appears on-screen as well, where he is known for his deadpan humor. Throughout the show's history, SNL has been nominated for more than 156 Emmy Awards and has won 36. It has consistently been one of the highest-rated late-night television programs. Michaels has been with SNL for all seasons except for his hiatus in the early 1980s (seasons 6–10).

Perhaps Michaels's best-known appearance occurred in the first season when he offered the Beatles $3,000 (a deliberately paltry sum) to reunite on the show. He later increased his offer to $3,200, but the money was never claimed. According to an interview in Playboy magazine, John Lennon and Paul McCartney happened to be in New York City that night and wanted to see the show. They very nearly went, but changed their minds as it was getting too late to get to the show on time, and they were both tired. This near-reunion was the basis for the TV movie Two of Us. On the November 20, 1976, show, musical guest George Harrison appeared, but Michaels told him the offer was conditional on all four members of the group showing up, not just any Beatle. Harrison told Michaels his refusal to pay him his share is "chintzy," and Michaels countered by saying, "The Beatles don't have to split the money equally. They can give, say, Ringo less if they want."

Michaels founded the production company Broadway Video in 1979, which has produced SNL since 1981 as well as other shows such as Canadian sketch-comedy The Kids in the Hall which began airing in 1988 on CBC in Canada, debuting in the US market in 1989 on cable television network HBO until moving to CBS in 1993.

During his SNL hiatus, Michaels created another sketch show titled The New Show, which debuted on Friday nights in prime time on NBC in January 1984. The show failed to garner the same enthusiasm as SNL and lasted only 9 episodes before being cancelled.

In the 1980s, Michaels appeared in an HBO mockumentary titled The Canadian Conspiracy about the supposed subversion of the United States by Canadian-born media personalities, with Lorne Greene as the leader of the conspiracy. Michaels was identified as the anointed successor to Greene.

In a 2008 interview with Playboy, as well in various other interviews, Tina Fey admitted that Alec Baldwin's character Jack Donaghy on 30 Rock is inspired by Michaels. In a different interview, on NPR's radio show Wait Wait... Don't Tell Me!, Baldwin stated that some of his inspiration for Donaghy was drawn from Michaels.

The character Dr. Evil, the antagonist of Austin Powers in three films, has mannerisms and a speaking style based on Lorne Michaels. Dr. Evil was created and portrayed by SNL alumnus Mike Myers, who was at least partially influenced by fellow SNL performer Dana Carvey's impression of Michaels.

In The Kids in the Hall movie Brain Candy, the character of Don Roritor was based heavily on actor Mark McKinney’s impersonation of Lorne Michaels. 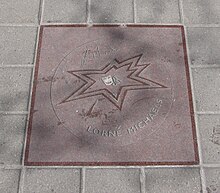 In 1999, Michaels was inducted into the Television Hall of Fame and was awarded a star on the Hollywood Walk of Fame.

Also in 1999, Michaels received an honorary degree from Ryerson University.

In 2004, he was awarded the Mark Twain Prize for American Humor by the Kennedy Center in Washington, D.C. Speaking at the awards ceremony, original Saturday Night Live cast member Dan Aykroyd described the show as "the primary satirical voice of the country".

In 2008, Michaels was awarded the Webby for Film & Video Lifetime Achievement. With the allotted 5-words allowed to each recipient, his five-word acceptance speech was "Five words is not enough".

In 2012, Michaels was awarded a rare Personal Peabody Award. He accepted at a ceremony in New York City at the Waldorf Astoria New York hotel.