Lower Merion High School is a public high school in Ardmore, a community in Philadelphia's Main Line suburbs. It is one of two high schools in the Lower Merion School District; the other one is Harriton High School. Lower Merion serves both Lower Merion Township and the Borough of Narberth. In 2020 Lower Merion ranked number 6 among College Prep Public High Schools in Pennsylvania by Niche.com and U.S. News & World Report ranked Harriton and Lower Merion 13th and 14th in the state respectively. In 2005 Lower Merion was ranked among the top sixty public or private U.S. high schools by The Wall Street Journal. While the school mascot is a bulldog, its athletics teams are known as the "Aces”, honoring the U.S. Air Force “Flying Aces” established by Lower Merion alum Henry Harley "Hap" Arnold (June 25, 1886 – January 15, 1950), an American general officer holding the ranks of General of the Army and General of the Air Force. 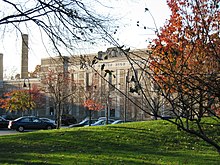 In 1894, with the consolidation of the area's three village high schools (Merion Square, Bryn Mawr, and Ardmore), Lower Merion began its first year in a stone building shared with the Ardmore Avenue Elementary School in Ardmore (photo). In 1897, nine students participated in the school's first commencement ceremony. The original high school faculty had seven members, including the principal and superintendent. The curriculum offered only a two-year preparation for either college or industry.

The Ardmore Avenue School burned in 1900 but was rebuilt, also of stone (photo). In 1911, the high school moved out of the elementary school to new quarters, designed and constructed at the present site, 245 E. Montgomery Avenue. Dedicated on December 2, 1911, "Lower Merion Senior High School" was an impressive granite and stone edifice considered one of the finest new educational facilities in the state. The 17-acre (69,000 m2) property, complete with three stone-arch entrances, landscaped grounds, and a football stadium, eventually grew to 23 acres (93,000 m2) with the purchase and annexation of the Clarke House. At its opening, twenty-one staff members were employed under principal "Professor" Charles B. Pennypacker. (photo)

In 1922, Lower Merion Junior High School (later renamed Ardmore Junior High School) was constructed adjacent to the senior high school, and in 1926 two new wings were added on either side of the main high school building. These additions doubled the size of the original school, helping to accommodate rapidly increasing enrollment. The present administration building was constructed in 1932 to provide office space and an additional twenty-five classrooms. By 1940, the teaching staff had expanded to 61 under the direction of principal George H. Gilbert. Total student enrollment was 1461 for grades 10–12.

In 1943 an adjoining "technical" building was added along the School House Lane side to house shops for auto repair, metal, print, wood-working and drafting (photo). In 1950, a cafeteria/library wing (photo), designed by the Philadelphia firm of Savory, Scheetz and Gilmour, was added near Pennypacker athletic field. That same year the 18-acre (73,000 m2) General Henry Harley "Hap" Arnold athletic fields opened directly across Montgomery Ave. By 1957, enrollment had grown to 1,663 students and the time had come to build a second high school (Harriton) in Lower Merion Township. The original 1910 building was demolished in 1963 and replaced by an air-conditioned classroom structure designed by H. A. Kuljian and Co.

Decreases in enrollment district-wide caused many Lower Merion elementary schools to close in the late 1970s along with Ardmore Junior High School. This move changed the remaining junior high schools to becoming middle schools (grades 6–8) and moved the ninth grade to the high schools. The Lower Merion High School graduation class of 1982 was the first freshman class at the high school including those students who four years earlier were members of the last graduating class of Ardmore Junior High School.

Due to later enrollment increases and to accommodate changing program needs, the district frequently reconfigured spaces in the facility, including re-opening classroom and storage space in the former Ardmore Junior High School in the 1990s. (Most of the junior high school had been demolished in 1992 to make way for additional parking). Rooms in the technical building were converted to other uses, including art classes, computer labs, and the school's television studio. Original classrooms were re-purposed as spaces for individualized learning support and students with special needs. The central lobby that connected the 1932 and 1963 structures was converted to a college-style help center in 2004.

In 2004, a community advisory committee determined that existing facilities no longer met the standards of the Lower Merion community and recommended that a new school, configured for 21st century education, be constructed on the same site. The Board and administration authorized construction of this new school in 2007. Demolition of the "Ardmore Annex", the natatorium, and one of the school's two gyms commenced in the summer of 2008 to make way for construction. The new Lower Merion High School opened in September 2010 and was dedicated in a public ceremony on October 17, 2010. In addition to state-of-the-art classrooms, science laboratories, art classrooms, and music rehearsal spaces, the new Lower Merion features a lecture hall with tiered seating, a multi-purpose black box theater, an 850-seat auditorium/theater, a greenhouse for environmental and horticultural studies, high-performance athletic facilities, a swimming pool, a television studio, multi-media production facilities, a music technology lab, an expansive courtyard, and a two-story, glass-encased library that serves as the building's exterior focal point along Montgomery Avenue.

The school also features a planetarium on top of the old building that closed after it was declared a fire hazard. It was then temporarily transformed into a staff lounge room. However, the room is currently vacated.

The new school was constructed adjacent to the historic district administration office (DAO) building, which is the only "original" structure that remains on the site. A number of measures were approved by the Lower Merion Historic Commission to ensure the school was designed to complement this Class I historic resource. The placement of the new building provides an unobstructed view of the DAO from Montgomery Avenue. The color and size of the masonry used in the new building is reflective of materials of the DAO. Vertical windows and metal spandrel panels echo elements of the DAO's façade. The scale of the building is also sympathetic to the nearby residential neighborhood. The stone engraving of Ardmore Junior High School's motto, "Enter To Learn, Go Forth To Serve," remains on the front lawn of the high school property, facing Montgomery Avenue. (photo)

Lower Merion Athletics compete in the Central League and are represented as either the Bulldogs or the Aces. Bulldogs is used for football, girls ice hockey and softball. Aces is used by all other sports.

The 2007 Lower Merion Baseball team recorded a 12–6 record, the second best in 50 years. They have only won one Central League Championship, in 2005.

In 1996, the Aces rode a 30-game winning streak to a district title and their first state title in 50 years, finishing the season 31–3.

In the 2004–05 season, the Aces won the Western bracket and became the lowest seed to ever reach the state finals. In 2006, Lower Merion avenged three previous losses against the Chester Clippers in a rematch at the Palestra and defeated the heavily favored Schenley High School Spartans, 60–58, in the championship game.

In 2007, despite having lost six seniors, the Aces advanced to the AAAA Quarterfinals, losing to Simon Gratz High School.

The following year, despite having lost ten seniors after the previous season, the Aces once again reached the AAAA Quarterfinals, where they were defeated by La Salle College High School.

Former NBA superstar Kobe Bryant led Lower Merion to the state championship before graduating in 1996. On December 16, 2010, the school held a sold-out dedication ceremony for Kobe Bryant, naming the school's new gym after him. In 2020 the Kobe Bryant Gymnasium hosted a memorial service honoring Bryant who was killed in a helicopter crash. His Lower Merion jersey (No. 33) was dedicated and now hangs over the door in the gym.

In the 2010 WebcamGate lawsuit, plaintiffs charged that Lower Merion School District (including Lower Merion High School and Harriton High School) secretly spied on students enrolled at the two high schools by surreptitiously and remotely activating webcams embedded in school-issued laptops the students were using at home, and therefore infringed on their privacy rights. The schools admitted to secretly snapping over 66,000 webshots and screenshots. Those included webcam shots of students in their bedrooms. In October 2010, the school district agreed to pay $610,000 to settle the Robbins and parallel Hasan lawsuits against it.

Two parents filed the lawsuit against the school district on February 11, 2010. The plaintiff was a student at one of the two district high schools. A federal judge issued a preliminary injunction ordering the district to stop its secret webcam monitoring, and ordered the district to pay the plaintiffs' attorney fees.

In July 2010, a Lower Merion High School student filed a parallel second suit. The school was also put on notice of a third parallel suit that a third student intended to bring, for "improper surveillance of the Lower Merion High School student on his school issued laptop", which included taking over 700 webcam shots and screenshots between December 2009 and February 2010.

A U.S. Senate Judiciary subcommittee held hearings on the issues raised by the schools' secret surveillance, and Senator Arlen Specter introduced draft legislation in the Senate to protect against it in the future. The Federal Bureau of Investigations (FBI), U.S. Attorney's Office, and Montgomery County District Attorney all initiated criminal investigations of the matter, which they combined and then closed because they did not find evidence "that would establish beyond a reasonable doubt that anyone involved had criminal intent". The civil lawsuit has a much lower burden of proof, and is unaffected by the decision. Lower Merion Police Superintendent Michael McGrath said: "This would appear to be a matter to be resolved in civil court." An investigative report prepared by the law firm Ballard, Spahr LLP–the firm that the Lower Merion School District had hired to defend it–did not find evidence that the system "was used to 'spy' on students", but was unable in many instances to find who had authorized that the system take surreptitious photographs, for what reason, and to find copies of photographs that had been deleted from the school server. 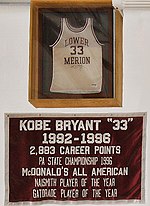