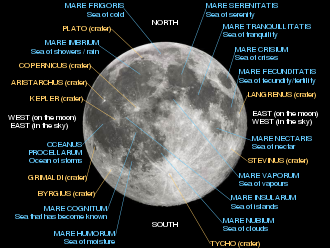 The lunar maria /ˈmɑːriə/ (singular: mare /ˈmɑːreɪ/) are large, dark, basaltic plains on Earth's Moon, formed by ancient volcanic eruptions. They were dubbed maria, Latin for "seas", by early astronomers who mistook them for actual seas. They are less reflective than the "highlands" as a result of their iron-rich composition, and hence appear dark to the naked eye. The maria cover about 16% of the lunar surface, mostly on the side visible from Earth. The few maria on the far side are much smaller, residing mostly in very large craters. The traditional nomenclature for the Moon also includes one oceanus (ocean), as well as features with the names lacus (lake), palus (marsh), and sinus (bay). The last three are smaller than maria, but have the same nature and characteristics.

The names of maria refer to sea features (Mare Humorum, Mare Imbrium, Mare Insularum, Mare Nubium, Mare Spumans, Mare Undarum, Mare Vaporum, Oceanus Procellarum, Mare Frigoris), sea attributes (Mare Australe, Mare Orientale, Mare Cognitum, Mare Marginis), or states of mind (Mare Crisium, Mare Ingenii, Mare Serenitatis, Mare Tranquillitatis). Mare Humboldtianum and Mare Smythii were established before the final nomenclature, that of states of mind, was accepted, and do not follow this pattern. When Mare Moscoviense was discovered by the Luna 3, and the name was proposed by the Soviet Union, it was only accepted by the International Astronomical Union with the justification that Moscow is a state of mind.

The ages of the mare basalts have been determined both by direct radiometric dating and by the technique of crater counting. The radiometric ages range from about 3.16 to 4.2 billion years old (Ga), whereas the youngest ages determined from crater counting are about 1.2 Ga. Nevertheless, the majority of mare basalts appear to have erupted between about 3 and 3.5 Ga. The few basaltic eruptions that occurred on the far side are old, whereas the youngest flows are found within Oceanus Procellarum on the nearside. While many of the basalts either erupted within, or flowed into, low-lying impact basins, the largest expanse of volcanic units, Oceanus Procellarum, does not correspond to any known impact basin. 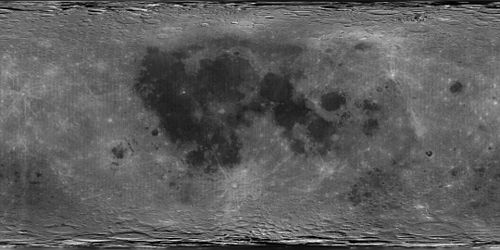 A global albedo map of the Moon obtained from the Clementine mission. The dark regions are the lunar maria, whereas the lighter regions are the highlands. The image is a cylindrical projection, with longitude increasing left to right from −180° E to 180° E and latitude decreasing from top to bottom from 90° N to 90° S. The center of the image corresponds to the mean sub-Earth point, 0° N and 0° E.

There are many common misconceptions concerning the spatial distribution of mare basalts.

The reason that the mare basalts are predominantly located on the near-side hemisphere of the Moon is still being debated by the scientific community. Based on data obtained from the Lunar Prospector mission, it appears that a large proportion of the Moon's inventory of heat producing elements (in the form of KREEP) is located within the regions of Oceanus Procellarum and the Imbrium basin, a unique geochemical province now referred to as the Procellarum KREEP Terrane. While the enhancement in heat production within the Procellarum KREEP Terrane is most certainly related to the longevity and intensity of volcanism found there, the mechanism by which KREEP became concentrated within this region is not agreed upon.

Using terrestrial classification schemes, all mare basalts are classified as tholeiitic, but specific subclassifications have been invented to further describe the population of lunar basalts. Mare basalts are generally grouped into three series based on their major element chemistry: high-Ti basalts, low-Ti basalts, and very-low-Ti (VLT) basalts. While these groups were once thought to be distinct based on the Apollo samples, global remote sensing data from the Clementine mission now shows that there is a continuum of titanium concentrations between these end members, and that the high-titanium concentrations are the least abundant. TiO2 abundances can reach up to 15 wt.% for mare basalts, whereas most terrestrial basalts have abundances much less than 4 wt.%. A special group of lunar basalts is the KREEP basalts, which are abnormally rich in potassium (K), rare-earth elements (REE), and phosphorus (P). A major difference between terrestrial and lunar basalts is the near-total absence of water in any form in the lunar basalts. Lunar basalts do not contain hydrogen-bearing minerals like the amphiboles and phyllosilicates that are common in terrestrial basalts due to alteration or metamorphism.