Macedonia for the Macedonians

A postcard containing the motto with a demographic map of Macedonia, issued by the Union of Macedonian Students in Vienna during the 1920s.

Aromanian memoir from 1912, called Macedonia for the Macedonians, which insists on an autonomous Macedonia based on the Swiss model because the area is ethnically diverse.

Macedonia for the Macedonians is a political slogan used during the first half of the 20th century in the region of Macedonia.

It was raised by the British politician William Ewart Gladstone in 1897, when he promoted an idea on a mini-Balkan Federation of Macedonia, Bulgaria and Serbia. Gladstone appealed for the right of self-determination of the peoples who resided in the region, while Britain regarded the creation of an autonomous Macedonia with a Christian governor as a possible solution of the Macedonian issue. On that occasion, the British journalist G. W. Steevens noted in the preface of the brochure containing the letter of Gladstone, that he has used "Macedonians" as a collective name of the diverse population of the region. Steevens explained that there were at least six different kind of Macedonians at that time. Once Gladstone launched the motto, this maxim became widely known. In 1898, the historian William Miller argued against Gladstone's proclamation and his motto, arguing that this idea would not be practical, as a Macedonian nation did not exist at the time, and that a problem for the Macedonian state would be the mixture of different warring nationalities. By that reason per Allen Upward that phrase could not have been used by anybody, who had a first hand knowledge of that country.

A poster from 1930s, issued by the Struga fraternity in Sofia, containing the motto.

The motto was adopted by the Internal Macedonian-Adrianople Revolutionary Organization (IMARO) and by the "Society for Macedo-Romanian Culture", in the early 20th century. At that time, according to Vasil Kanchov the local Bulgarians and Aromanians called themselves Macedonians, and the surrounding nations called them so.

In an article published in June, 1902, the IMARO revolutionaries promoted the idea of autonomy and the slogans "Macedonia for the Macedonians". The Organization gave a guarantee for the preservation of all national communities there, and insisted that the Bulgarians could be proud of their tolerance, in opposition to Romanians, Serbs and Greeks. They also planned that the administration of the future autonomous Macedonia will rely on the Bulgarian majority. In the same year the Organization changed its exclusively Bulgarian character, and opened it to all Macedonians and Thracians regardless of nationality, who wished to participate in the anti-Ottoman movement. Those revolutionaries saw the future autonomous Macedonia as a multinational polity, and "Macedonian" was an umbrella term covering Greeks, Bulgarians, Turks, Vlachs, Albanians, Serbs, etc. Nevertheless, the British Consul in Skopje Raphael Fontana wrote on the occasion of the Ilinden uprising in 1903 that the revolutionaries were working for a general Bulgarian uprising in order to reach their goal of "Macedonia for the Macedonians", understood to mean "Macedonia for the Bulgarians". According to the prevailing view in the Bulgarian historical science, the idea of autonomy represented only a tactics aiming at the eventual unification with Bulgaria. Some independent researchers suggests that behind the slogan "Macedonia for the Macedonians" there was a backup plan for the incorporation of Macedonia into the Bulgarian state. 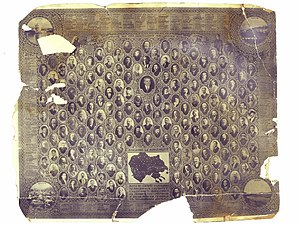 Poster with the participants on the third Congress of MFO (1923).

The Balkan Wars (1912–1913) and World War I (1914–1918) left the area divided mainly between Greece and Serbia (later Yugoslavia), which resulted in significant changes in its ethnic composition. The Bulgarian community was reduced, either by population exchanges or by forcible change of communities' ethnic identity. In this way the motto began to lose its authenthic character. Macedonian immigrants in the United States and Canada founded in 1922 in Fort Wayne, Indiana, the Macedonian Patriotic Organization. The founders of the MPO in their aspirations for a free and independent Macedonia also accepted the slogan "Macedonia for the Macedonians". The use of "Macedonians" and "Macedonian emigrants" then equally applied to all ethnic groups in Macedonia - Bulgarians, Wallachians, Turks, Albanians, Greeks and others. During the 1920s the descendant of the IMARO - IMRO followed also the idea about an independent United Macedonian multiethnic state with prevailing Bulgarian element, something as "Switzerland on the Balkans" and kept the slogan Macedonia for the Macedonians until its defunction in 1934.

"The Macedo-Romanian Cultural Society" had as its members the acting Prime and Foreign Ministers, as well as the Head of the Romanian Orthodox Church, and the elite of the Romanian political class. In 1912 an Aromanian memoir was published in Bucharest, after the outbreak of the Balkan War. The memoir was signed by five prominent Romanian and Aromanian public figures, members of the Society. In it, the Macedonian-Aromanian Culture Society, using the slogan Macedonia for the Macedonians, stated that Macedonia's autonomy is the best solution of the Macedonian question. As the region was ethnically diverse, an autonomous, neutral, cantonized by Swiss model state was proposed, where all nationalities will preserve their mother tongues and religions, enjoying the same democratic political rights. In 1917, during the First World War, the memoir was translated into Esperanto and was published in Stockholm. The memoir was presented to the Peace Conference in Paris in 1919.

Retrieved from "https://en.wikipedia.org/w/index.php?title=Macedonia_for_the_Macedonians&oldid=999511339"
Uses material from the Wikipedia article Macedonia for the Macedonians, released under the CC BY-SA 3.0 license.