Spanish basketball player
In this Catalan name, the first or paternal surname is Gasol and the second or maternal family name is Sáez; both are generally joined by the conjunction "i".

Marc Gasol Sáez (Catalan pronunciation: [ˈmaɾɡ ɡəˈzɔl]; born 29 January 1985) is a Spanish professional basketball player for the Los Angeles Lakers of the National Basketball Association (NBA). A center, he was drafted 48th overall by the Los Angeles Lakers in the 2007 NBA draft. After having his rights traded to the Memphis Grizzlies in February 2008 in a deal that sent his older brother Pau to the Lakers, he signed with the team and remained with the franchise until being traded to the Toronto Raptors in 2019, where he won his first NBA championship. He is a two-time All-NBA Team member, a three-time NBA All-Star, and an NBA champion. In 2013, he was named the NBA Defensive Player of the Year.

Gasol has been a regular member of the Spain national team since 2006. He has won two Olympic silver medals and two FIBA Basketball World Cup titles. In the EuroBasket, he has won two titles, a silver medal, and two bronze medals.

Gasol was born and raised in Barcelona, Spain. In 2001, he moved as a teenager with his parents to the Memphis suburb of Germantown, Tennessee, after his older brother Pau joined the Memphis Grizzlies. Gasol played high school basketball at Lausanne Collegiate School in Memphis. Nicknamed "The Big Burrito," he was named Division 2's Mr. Basketball in 2003 following a senior season in which he averaged 26 points, 13 rebounds, and six blocks per game. In 2008, Lausanne retired Gasol's #33 jersey. 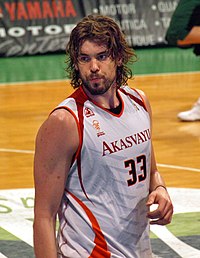 After graduating from Lausanne, Gasol returned to his home country of Spain to play in the Liga ACB for FC Barcelona. After three seasons with Barcelona, Gasol signed with Girona in 2006. In 2008, he was named the ACB Most Valuable Player.

Gasol was selected by the Los Angeles Lakers with the 48th overall pick in the 2007 NBA draft. On 1 February 2008, his draft rights were traded by the Lakers to the Memphis Grizzlies as part of a trade package that included his older brother, Pau, who was sent from the Grizzlies to the Lakers. On 9 July 2008, he signed with the Grizzlies. He set a franchise rookie record for field goal percentage in a season with 53 percent. The previous record was held by Pau with 51.8 percent in 2001–02. He subsequently earned NBA All-Rookie Second Team honors. After averaging 11.9 points and 7.4 rebounds as a rookie, he averaged 14.6 points and 9.3 rebounds in 2009–10 with a career-best .581 field goal percentage.

The 2010–11 season saw Gasol average 11.7 points, 7.0 rebounds, a career-high 2.5 assists and 1.68 blocks in 81 games (all starts). He then posted 15.0 points, 11.2 rebounds, 2.2 assists, and 2.15 blocks in helping lead the Grizzlies through a 13-game run in the 2011 NBA Playoffs. Memphis, which had never even won a playoff game before 2011, defeated the Western Conference's top-seeded San Antonio Spurs in the opening round, then went to a deciding seventh game against the Oklahoma City Thunder. Gasol led the Grizzlies in field goal accuracy and blocked shots in each of his first three NBA seasons.

On 14 December 2011, Gasol re-signed with the Grizzlies to a four-year, $58 million contract. On 23 January 2012, he was named Western Conference Player of the Week for games played 16–22 January. On 9 February 2012, he was named an NBA All-Star for the first time, earning a place on the Western Conference roster as a reserve for the 2012 NBA All-Star Game.

In 2012–13, Gasol was one of only six players to average at least 1.5 blocks (1.7 bpg) and 1.0 steals (1.0 spg). He led a Grizzlies defense that allowed a league-low 88.7 points per game during the regular season. His +5.4 score differential ranked second among NBA centers; additionally, Memphis enjoyed a +7.5 score differential when Gasol was on the court compared with -3.9 when he was on the bench. In April 2013, he was named the NBA Defensive Player of the Year, becoming the first player in Grizzlies history to earn the honor. ESPN lauded the Grizzlies' ability to force turnovers with Gasol on the court anchoring the defense. He was also named to the All-NBA Second Team. Despite winning Defensive Player of the Year, Gasol was named to the NBA All-Defensive Second Team due to a different voting system. 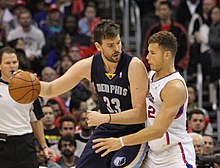 In 2013–14, Gasol played a career-low 59 games. A left MCL sprain suffered on 22 November against the San Antonio Spurs sidelined him for 23 games from 25 November to 12 January.

The 2014–15 season saw Gasol earn his second NBA All-Star selection, earning his first All-Star start, and was named to the All-NBA First Team for the first time. He averaged a career-best 17.4 points to go with 7.8 rebounds and 3.8 assists for the 55-win Grizzlies. He scored 30-plus points five times after doing so just once in his first six seasons. He set career-highs in field goals made and attempted, as well as free throws made and attempted. He was the only player in the league with at least 1,300 points, 600 rebounds, and 300 assists.

On 13 July 2015, Gasol re-signed with the Grizzlies on a five-year maximum contract worth an estimated $110 million. On 20 November, he recorded his first career triple-double with 16 points, 11 rebounds, and 11 assists in a 96–84 win over the Houston Rockets, marking the first triple-double for Memphis since 2007 when his brother Pau recorded 17 points, 13 rebounds, and 12 assists. Gasol set a new career low for games played with 52 after missing the second half of the season with a broken right foot. 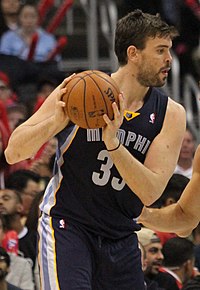 In November 2018, Gasol passed Zach Randolph (5,612) to become the Grizzlies' all-time career rebound leader. In December, Gasol made at least one 3-pointer in 13 consecutive games, which tied a career-high. He set a new record in the first game of January, making a 3-pointer in his 14th straight game on 2 January against the Detroit Pistons. The streak ended at 15 games. On 23 January, he recorded his fifth career triple-double with 22 points, 17 rebounds, and 10 assists in a 118–107 loss to the Charlotte Hornets.

On 7 February 2019, Gasol was traded to the Toronto Raptors in exchange for C. J. Miles, Jonas Valančiūnas, Delon Wright and a 2024 second-round draft pick. He made his debut for the Raptors two days later, recording seven points and six rebounds in 19 minutes off the bench in a 104–99 win over the New York Knicks. Gasol soon stepped into the starting center role in Toronto, and his pass-first offensive approach helped the Raptors become the NBA's top 3-point shooting team over the second half of the season. He helped the Raptors reach the 2019 NBA Finals. In his first ever NBA Finals game, Gasol scored 20 points and grabbed 7 rebounds in a win. After defeating the Golden State Warriors in six games, Marc joins his brother Pau, and his two championships in 2009 and 2010, as the first set of brothers to win NBA titles.

On 26 June 2019, Gasol opted in with the Toronto Raptors by exercising his $25.6 million player option for the 2019–20 season. On 25 November 2019, despite only scoring 3 points, Gasol had his best game of the season with 6 rebounds and 9 assists while holding Joel Embiid scoreless for the first time in his career in a 101–96 win over the Philadelphia 76ers. 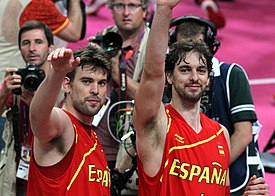 In 2006, Gasol was named to the Spain national team for the 2006 FIBA World Championship in Japan as a replacement for NBA-draftee Fran Vázquez. Spain went on to win the gold medal in Japan, as well as at the 2009 FIBA EuroBasket. He also won silver medals at the 2007 FIBA EuroBasket, the 2008 Summer Olympics, and the 2012 Summer Olympics. He won his second world championship title with the Spanish team at the 2019 FIBA World Championship in China.

At the 2019 FIBA Basketball World Cup, Gasol won his second World Cup title. Gasol scored 33 points in the semi-final to defeat Australia. He scored 14 points, had a team-high 7 assists, had 2 steals, and blocked 3 shots in the Final against Argentina. He was named to the World Cup All-Star Team along with teammate Ricky Rubio. Gasol became the second player in history to win an NBA championship and a World Cup in the same year, and the first non-American to win an NBA or WNBA title and either a World Cup or Olympic gold medal in the same year.

European Player of the Year awards