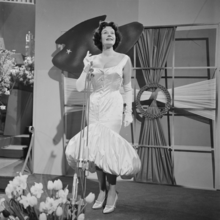 Hielscher was born in Berlin. In 1957, she was chosen to represent Germany at the Eurovision Song Contest 1957 with the song "Telefon, Telefon" (Telephone, Telephone). The song finished fourth out of ten, with eight points.

Hielscher was chosen again to represent Germany at the Eurovision Song Contest 1958 with the song "Für Zwei Groschen Musik" (Music For Two Pennies). The song finished seventh out of ten, with 5 points.

In 1989, she starred in the TV series Rivalen der Rennbahn. She died in Munich, aged 97.

In 1978, she was awarded the "Bundesverdienstkreuz" and in 1985 the "Filmband in Gold" for her contributions to German cinema.