Ocean chemistry, also known as marine chemistry, is influenced by plate tectonics and seafloor spreading, turbidity currents, sediments, pH levels, atmospheric constituents, metamorphic activity, and ecology. The field of chemical oceanography studies the chemistry of marine environments including the influences of different variables. Marine life has adapted to the chemistries unique to earth's oceans, and marine ecosystems are sensitive to changes in ocean chemistry.

The impact of human activity on the chemistry of the earth's oceans has increased over time, with pollution from industry and various land-use practices significantly affecting the oceans. Moreover, increasing levels of carbon dioxide in the earth's atmosphere have led to ocean acidification, which has negative effects on marine ecosystems. The international community has agreed that restoring the chemistry of the oceans is a priority, and efforts toward this goal are tracked as part of Sustainable Development Goal 14.

Organic compounds in the oceans

Colored dissolved organic matter (CDOM) is estimated to range 20-70% of carbon content of the oceans, being higher near river outlets and lower in the open ocean.

Marine life is largely similar in biochemistry to terrestrial organisms, except that they inhabit a saline environment. One consequence of their adaptation is that marine organisms are the most prolific source of halogenated organic compounds. 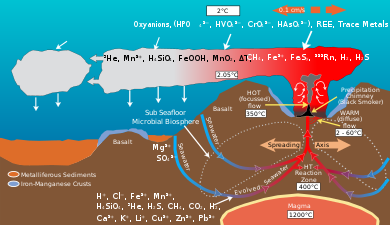 The ocean provides special marine environments inhabited by extremophiles that thrive under unusual conditions of temperature, pressure, and darkness. Such environments include hydrothermal vents and black smokers and cold seeps on the ocean floor, with entire ecosystems of organisms that have a symbiotic relationship with compounds that provided energy through a process called chemosynthesis. 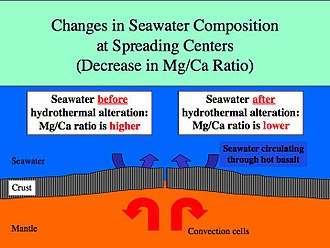 Seafloor spreading on mid-ocean ridges is a global scale ion-exchange system. Hydrothermal vents at spreading centers introduce various amounts of iron, sulfur, manganese, silicon and other elements into the ocean, some of which are recycled into the ocean crust. Helium-3, an isotope that accompanies volcanism from the mantle, is emitted by hydrothermal vents and can be detected in plumes within the ocean.

Spreading rates on mid-ocean ridges vary between 10 and 200 mm/yr. Rapid spreading rates cause increased basalt reactions with seawater. The magnesium/calcium ratio will be lower because more magnesium ions are being removed from seawater and consumed by the rock, and more calcium ions are being removed from the rock and released to seawater. Hydrothermal activity at ridge crest is efficient in removing magnesium. A lower Mg/Ca ratio favors the precipitation of low-Mg calcite polymorphs of calcium carbonate (calcite seas).

Slow spreading at mid-ocean ridges has the opposite effect and will result in a higher Mg/Ca ratio favoring the precipitation of aragonite and high-Mg calcite polymorphs of calcium carbonate (aragonite seas).

Experiments show that most modern high-Mg calcite organisms would have been low-Mg calcite in past calcite seas, meaning that the Mg/Ca ratio in an organism's skeleton varies with the Mg/Ca ratio of the seawater in which it was grown.

The mineralogy of reef-building and sediment-producing organisms is thus regulated by chemical reactions occurring along the mid-ocean ridge, the rate of which is controlled by the rate of sea-floor spreading.

This section is an excerpt from Marine pollution[edit] 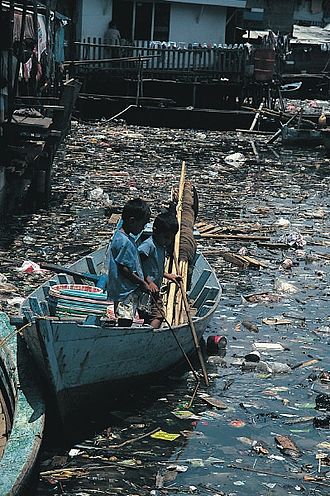 While marine pollution can be obvious, as with the marine debris shown above, it is often the pollutants that cannot be seen that cause most harm.

Marine pollution occurs when harmful effects result from the entry into the ocean of chemicals, particles, industrial, agricultural and residential waste, noise, or the spread of invasive organisms. Eighty percent of marine pollution comes from land. Air pollution is also a contributing factor by carrying off iron, carbonic acid, nitrogen, silicon, sulfur, pesticides or dust particles into the ocean. Land and air pollution have proven to be harmful to marine life and its habitats.

The pollution often comes from nonpoint sources such as agricultural runoff, wind-blown debris, and dust. Pollution in large bodies of water can be aggravated by physical phenomena like the biological effects of Langmuir circulation. Nutrient pollution, a form of water pollution, refers to contamination by excessive inputs of nutrients. It is a primary cause of eutrophication of surface waters, in which excess nutrients, usually nitrates or phosphates, stimulate algae growth. Many potentially toxic chemicals adhere to tiny particles which are then taken up by plankton and benthic animals, most of which are either deposit feeders or filter feeders. In this way, the toxins are concentrated upward within ocean food chains. Many particles combine chemically in a manner highly depletive of oxygen, causing estuaries to become anoxic.

When pesticides are incorporated into the marine ecosystem, they quickly become absorbed into marine food webs. Once in the food webs, these pesticides can cause mutations, as well as diseases, which can be harmful to humans as well as the entire food web. Toxic metals can also be introduced into marine food webs. These can cause a change to tissue matter, biochemistry, behaviour, reproduction, and suppress growth in marine life. Also, many animal feeds have a high fish meal or fish hydrolysate content. In this way, marine toxins can be transferred to land animals, and appear later in meat and dairy products.

In order to protect the ocean from marine pollution, policies have been developed internationally. The international community has agreed that reducing pollution in the oceans is a priority, which is tracked as part of Sustainable Development Goal 14 which actively seeks to undo these human impacts on the oceans. There are different ways for the ocean to get polluted, therefore there have been multiple laws, policies, and treaties put into place throughout history.

Increased carbon dioxide levels, resulting from anthropogenic factors or otherwise, have the potential to impact ocean chemistry. Global warming and changes in salinity have significant implications for ecology of marine environments. One proposal suggests dumping massive amounts of lime, a base, to reverse the acidification and "increase the sea's ability to absorb carbon dioxide from the atmosphere".

This section is an excerpt from Ocean acidification[edit] 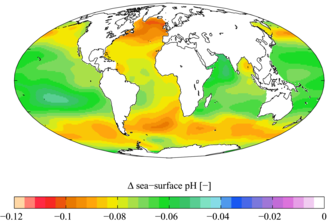 Estimated change in seawater pH caused by human-created CO
2 between the 1700s and the 1990s, from the Global Ocean Data Analysis Project (GLODAP) and the World Ocean Atlas 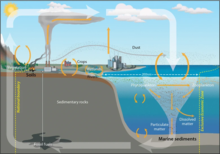 Here is a detailed image of the full carbon cycle 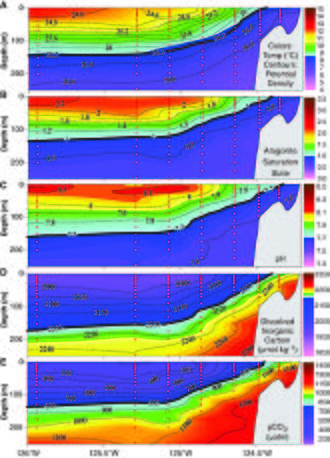 NOAA provides evidence for the upwelling of "acidified" water onto the Continental Shelf. In the figure above, note the vertical sections of (A) temperature, (B) aragonite saturation, (C) pH, (D) DIC, and (E) pCO
2 on transect line 5 off Pt. St. George, California. The potential density surfaces are superimposed on the temperature section. The 26.2 potential density surface delineates the location of the first instance in which the undersaturated water is upwelled from depths of 150 to 200 m onto the shelf and outcropping at the surface near the coast. The red dots represent sample locations. 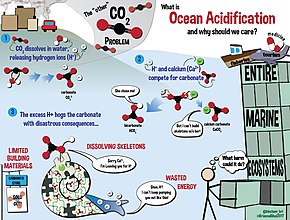 Ocean acidification is the ongoing decrease in the pH of the Earth's oceans, caused by the uptake of carbon dioxide (CO
2) from the atmosphere. The main cause of ocean acidification is the burning of fossil fuels. Seawater is slightly basic (meaning pH > 7), and ocean acidification involves a shift towards pH-neutral conditions rather than a transition to acidic conditions (pH < 7). The issue of ocean acidification is the decreased production of the shells of shellfish and other aquatic life with calcium carbonate shells. The calcium carbonate shells can not reproduce under high saturated acidotic waters. An estimated 30–40% of the carbon dioxide from human activity released into the atmosphere dissolves into oceans, rivers and lakes. Some of it reacts with the water to form carbonic acid. Some of the resulting carbonic acid molecules dissociate into a bicarbonate ion and a hydrogen ion, thus increasing ocean acidity (H+ ion concentration). Between 1751 and 1996, surface ocean pH is estimated to have decreased from approximately 8.25 to 8.14, representing an increase of almost 30% in H+ ion concentration in the world's oceans. Earth System Models project that, by around 2008, ocean acidity exceeded historical analogues and, in combination with other ocean biogeochemical changes, could undermine the functioning of marine ecosystems and disrupt the provision of many goods and services associated with the ocean beginning as early as 2100.

Increasing acidity is thought to have a range of potentially harmful consequences for marine organisms such as depressing metabolic rates and immune responses in some organisms and causing coral bleaching. By increasing the presence of free hydrogen ions, the additional carbonic acid that forms in the oceans ultimately results in the conversion of carbonate ions into bicarbonate ions. Ocean alkalinity (roughly equal to [HCO3−] + 2[CO32−]) is not changed by the process, or may increase over long time periods due to carbonate dissolution. This net decrease in the amount of carbonate ions available may make it more difficult for marine calcifying organisms, such as coral and some plankton, to form biogenic calcium carbonate, and such structures become vulnerable to dissolution. Ongoing acidification of the oceans may threaten future food chains linked with the oceans. As members of the InterAcademy Panel, 105 science academies have issued a statement on ocean acidification recommending that by 2050, global CO
2 emissions be reduced by at least 50% compared to the 1990 level. To ensure that ocean acidification is minimized, the United Nation's Sustainable Development Goal 14 ("Life below Water") aims to ensure that oceans are conserved and sustainably used.

Latest research challenges the potential negative impact of end-of-century ocean acidification level on the coral fish behavior and suggests that the effect could be negligible. Controversially, laboratory experiments in the controlled environment showed CO
2 induced growth of the phytoplankton species. Field study of the coral reef in Queensland and Western Australia from 2007 to 2012 argues that corals are more resistant to the environmental pH changes than previously thought, due to internal homeostasis regulation; this makes thermal change, rather than acidification, the main factor for coral reef vulnerability due to global warming.

While ongoing ocean acidification is at least partially anthropogenic in origin, it has occurred previously in Earth's history, and the resulting ecological collapse in the oceans had long-lasting effects for global carbon cycling and climate. The most notable example is the Paleocene-Eocene Thermal Maximum (PETM), which occurred approximately 56 million years ago when massive amounts of carbon entered the ocean and atmosphere, and led to the dissolution of carbonate sediments in all ocean basins.

Ocean acidification has been compared to anthropogenic climate change and called the "evil twin of global warming" and "the other CO
2 problem". Freshwater bodies also appear to be acidifying, although this is a more complex and less obvious phenomenon.

Marine chemistry on other planets and their moons

A planetary scientist using data from the Cassini spacecraft has been researching the marine chemistry of Saturn's moon Enceladus using geochemical models to look at changes through time. The presence of salts may indicate a liquid ocean within the moon, raising the possibility of the existence of life, "or at least for the chemical precursors for organic life".