This article is about the Marmaray commuter rail project. For the trans-Bosphorus undersea tunnels, see Marmaray Tunnel.
Not to be confused with Marmara (disambiguation).

listen)) is a 76.6 km-long (47.6 mi) intercontinental commuter rail line in Istanbul, Turkey. It comprises a rail tunnel under the Bosphorus strait and the modernization of existing suburban railway lines along the Sea of Marmara from Halkalı on the European side to Gebze on the Asian side. The procurement of new rolling stock for suburban passenger traffic is also part of the project. Construction started in 2004, with an initial target opening date of April 2009. After multiple delays caused by the discovery of historical and archaeological sites, the first phase of the project opened on October 29, 2013. It is the first standard gauge rail connection between Europe and Asia. The second phase of the project was scheduled to open in 2015, but work was stopped in 2014. Work was restarted in February 2017 and the full line opened on March 12, 2019.

Marmaray is the fourth underground system in Istanbul after the Tünel Funicular, Metro and Kabataş–Taksim funicular and highly integrated with Metro lines.

The name Marmaray comes from combining the name of the Sea of Marmara, which lies just south of the project site, with ray, the Turkish word for rail. The Turkish press has compared it to the Silk Road.

The project includes a 13.6-kilometre (8.5 mi) crossing of the Bosphorus and the upgrade of 63 kilometres (39 mi) of suburban rail lines to create a 76.6-kilometre (47.6 mi) high-capacity passenger line between Gebze and Halkalı, along with the provision of 440 electric multiple unit cars.

The construction contract for the project was awarded to a Japanese-Turkish consortium led by Taisei Corporation in July 2004. The consortium included Gama Endustri Tesisleri Imalat ve Montaj, Nurol Construction.

The Bosphorus (Istanbul Strait) is crossed by a 1.4-kilometre-long (0.87 mi) earthquake-proofed immersed tube, assembled from 11 sections; eight are 135 metres (443 ft), two are 98.5 metres (323 ft), and one element is 110 metres (360 ft) long. The elements weigh up to 18,000 tons. The sections have been placed down to 60 metres (197 ft) below sea level: 55 metres (180 ft) of water and 4.6 metres (15 ft) of earth. This underwater tube is accessed by bored tunnels from Kazlıçeşme on the European side and Ayrılıkçeşmesi on the Asian side of Istanbul. It represents the world's deepest undersea immersed tube tunnel. Fire-resistant concrete developed in Norway was crucial for the safety of the project.

Construction of the Marmaray project started in May 2004. The Marmaray tunnel was completed on September 23, 2008, with a formal ceremony to mark completion of the tunnel on October 13. 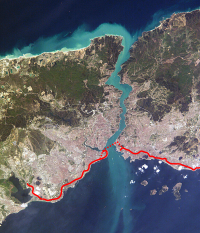 Path of the rail tunnel project (dotted line) within the Marmaray railway, across the Bosphorus strait

The second stage is the renewal of current railways on the ground, between Gebze and Ayrılık Çeşmesi on the Asian side, and between Kazlıçeşme and Halkalı on the European side. It was scheduled to be completed at the same time as the first phase (tunnels and underground parts), but little progress has been made on this and it is still incomplete. A third line will be added which will provide the electric multiple unit (EMU) cars and other rail cars the ability to move separately. Thirty-seven other above-ground stations along the line will be rebuilt or refurbished. The capacity of the line is planned to be 75,000 passengers per hour in each direction (PPHPD). Signalling will also be modernized to allow trains to be as close as two minutes apart. The predicted travel time from Gebze to Halkalı is 104 minutes.

Completion of the entire project had been repeatedly delayed. As of December 2009, it was expected to occur in October 2013 but as of May 2015 the old suburban lines had been removed but no progress had been made on replacing them. After completion, the use of rail transportation in Istanbul is predicted to rise from 3.6% to 27.7%. It is also planned that during off-peak hours, YHT, mainline and regional trains will also pass through the tunnel in order to reach the European side of the city. The line from Halkali to Gebze was inaugurated on March 12, 2019 by President Erdoğan.

In February 2010, Railway Gazette International reported that the tunnel's administrators were hiring consultants to analyse options for carrying freight traffic.

Although not officially announced by TCDD, the Prime Minister and officers stated several times that Marmaray will help to bring back the use of the term "Silk Road" with a new name of "Iron Silk Road" by allowing freight trains to move between Europe and China. Freight trains free of dangerous goods will be able to move through the tunnel when commuter services are not operating (between 1:00 a.m. and 5:00 a.m.).

The Japan International Cooperation Agency (JICA) and the European Investment Bank (EBI) have provided major financing for the project. By April 2006, JICA had lent 111 billion yen and EIB 1.05 billion euro. The total cost of the project is expected to be approximately 2.5 billion US dollars. In late 2009, costs were expected to increase by approximately 500 million US dollars due to the archaeological delays. 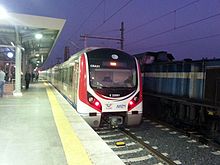 A Marmaray train at Kazlıçeşme

There will be two depot and maintenance yards on the line (one at each end) where the sets are planned to be stocked. But as the constructions were delayed, the sets are temporarily kept at the historical Haydarpaşa, Sirkeci and Edirne yards.

The project was delayed four years, largely due to the discovery of a Byzantine-era and other 8,000-year-old archaeological finds on the proposed site of the European tunnel terminal in 2005. The excavations produced evidence of the city's largest harbour, the 4th-century Harbour of Eleutherios (later known as the Harbour of Theodosius). There, archaeologists uncovered traces of the city wall of Constantine the Great, and the remains of several ships, including what appears to be the only ancient or early medieval galley ever discovered, preventing the project from proceeding at full speed. In addition, the excavation has uncovered the oldest evidence of settlement in Istanbul, with artifacts, including amphorae, pottery fragments, shells, pieces of bone, horse skulls, and nine human skulls found in a bag, dating back to 6,000 BCE. Glass artefacts and fragments dating from the Hellenistic, Roman, Byzantine and Ottoman periods have been found during excavations at Sirkeci.

The suburban rail upgrade section of the project, known originally as CR1, was first awarded to the AMD Rail Consortium, comprising Marubeni of Japan, Dogus Insaat of Turkey and Alstom of France. However, it faltered and the work was re-tendered as contract CR3 in early 2011. The replacement contract worth €932.8 million was awarded to a joint venture of OHL and Invensys Rail. This section was planned to be completed by June 2015. However, due to "slow down" in construction works, there have been further delays in this section of the project and nobody knows when it will open.

Tunnel construction is only about 18 kilometres (11 mi) from the active North Anatolian Fault, worrying engineers and seismologists. "Since AD 342, it has seen large earthquakes that each claimed more than 10,000 lives." Scientific calculations estimated a probability of 77 percent that, at some time in the next 30 years, the area will suffer an earthquake of strength 7.0 or more on the Richter magnitude scale. The waterlogged, silty soil on which the tunnel is constructed has been known to liquefy during an earthquake; to solve this problem, engineers injected industrial grout down to 24 metres (79 ft) below the seabed to keep it stable. The walls of the tunnel are made of waterproof concrete coated with a steel shell, each independently watertight. The tunnel is made to flex and bend, similar to the way tall buildings are constructed to react if an earthquake hits. Floodgates at the joints of the tunnel are able to close and isolate water in the event of the walls' failure.

Steen Lykke, project manager for Avrasyaconsult, the international consortium that is overseeing the construction, sums it up, saying, "I can't think of any challenge this project lacks".

On August 4, 2013, the Prime Minister, Recep Tayyip Erdoğan, was the driver for the first test ride on Marmaray. The ride started from Ayrılık Çeşmesi station (older name İbrahimağa station) at the Asian side and ended at a distance of about 10 km (6.2 mi) on the European side crossing Bosphorus underwater, and then back.

After the opening ceremony, Yeni Şafak published a letter addressed to the Japanese workers working on the Marmaray, in which the Turkish officers responsible for the construction threatened to commit suicide if the project did not finish before the October 2013 deadline. The letter was signed in blood by Metin Tahan, the Turkish Transportation Ministry Infrastructure Investment Director General.

In the early days after the opening, trains were stopped several times. This caused confusion, in which the stoppages were explained as being caused by pro-Gezi protestors using the emergency brakes.

On November 7, 2019, using a Chinese locomotive, the first Chinese freight train to Europe ran through the tunnel. This demonstrated that a China to Turkey transportation time was reduced from a month to 12 days, and is part of the Iron Silk Road.

Some figures of the project are as follows:

The project has a target of 1.5 million passengers per day after completion of the whole project.

Retrieved from "https://en.wikipedia.org/w/index.php?title=Marmaray&oldid=1001651708"
Uses material from the Wikipedia article Marmaray, released under the CC BY-SA 3.0 license.