NASA rotorcraft on the Mars 2020 mission

Ingenuity, nicknamed Ginny, is a robotic rotorcraft that is planned to be used to test the technology to scout targets of interest on Mars, and help plan the best driving route for future Mars rovers. The small drone helicopter is planned for deployment about 60 days after the landing of the Perseverance rover on 18 February 2021 as part of the NASA Mars 2020 mission.

It is planned to make the first rotor-powered flight on any planet beyond Earth, and is expected to fly up to five times during its 30-day test campaign, early in the rover's mission, as it is primarily a technology demonstration. Each flight is planned to be at altitudes ranging from 3–5 m (10–16 ft) above the ground. In up to 90 seconds per flight, it could travel as far as 50 m (160 ft) downrange and then back to the starting area. It can use autonomous control during its short flights, although flights will be telerobotically planned and scripted by controllers at the Jet Propulsion Laboratory. It will communicate with the Perseverance rover directly after each landing. If it works as expected, NASA could build on the design for future Mars aerial missions. 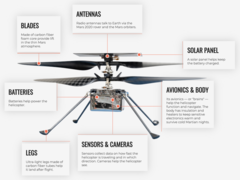 Diagram showing the components of Ingenuity

Ingenuity is designed to be a technology demonstrator by JPL to assess whether this technology can fly safely, and provide better mapping and guidance that would give future mission controllers more information to help with travel routes planning and hazard avoidance, as well as identifying points of interest for the rover. The helicopter is designed to provide overhead images with approximately ten times the resolution of orbital images, and will provide images of features that may be occluded from the cameras of the Perseverance rover. It is expected that such scouting may enable future rovers to safely drive up to three times as far per sol.

The helicopter uses contra-rotating coaxial rotors about 1.2 m (4 ft) in diameter. Its payload is a high resolution downward-looking camera for navigation, landing, and science surveying of the terrain, and a communication system to relay data to the Perseverance rover. Although it is an aircraft, it was constructed to spacecraft specifications in order to endure the g-force and vibration during launch. It also includes radiation-resistant systems capable of operating in the frigid environment of Mars. The inconsistent Mars magnetic field precludes the use of a compass for navigation, so it uses a solar tracker camera integrated to JPL's visual inertial navigation system. Some additional inputs include gyros, visual odometry, tilt sensors, altimeter, and hazard detectors. It was designed to use solar panels to recharge its batteries, which are six Sony Li-ion cells with 35–40 Wh (130–140 kJ) of battery energy capacity (nameplate capacity of 2 Ah).

The helicopter uses a Qualcomm Snapdragon 801 processor with a Linux operating system. Among other functions, this controls the visual navigation algorithm via a velocity estimate derived from features tracked with a camera. The Qualcomm processor is connected to two flight-control microcontroller units (MCUs) to perform the necessary flight-control functions. It also carries an IMU and a Garmin LIDAR Lite v3 laser altimeter. Communications with the rover are through a radio link using low-power Zigbee communication protocols, implemented via 900 MHz SiFlex 02 chipsets mounted in both the rover and helicopter. The communication system is designed to relay data at 250 kbit/s over distances of up to 1,000 m (3,300 ft).

The helicopter is attached to the underside of the Perseverance rover, which landed on 18 February 2021, and should be deployed to the surface about 60 days after the landing. After deployment, the rover is expected to drive approximately 100 m (330 ft) away from the drone to provide a safe buffer zone in which it will attempt to fly.

In 2019, preliminary designs of Ingenuity were tested on Earth in simulated Mars atmospheric and gravity conditions. For flight testing, a large vacuum chamber was used to simulate the very low atmospheric pressure of Mars – filled with carbon dioxide to approximately 0.60% (about ​1⁄160) of standard atmospheric pressure at sea level on Earth – which is roughly equivalent to a helicopter flying at 34,000 m (112,000 ft) altitude in the atmosphere of Earth. In order to simulate the much reduced gravity field of Mars (38% of Earth's), 62% of Earth's gravity was offset by a line pulling upwards during flight tests.

The Ingenuity technology demonstrator could form the foundation on which more capable aircraft might be developed for aerial exploration of Mars and other planetary targets with an atmosphere. The next generation of rotorcraft could be in the range between 5 and 15 kg (11 and 33 lb) with science payloads between 0.5 and 1.5 kg (1.1 and 3.3 lb). These potential aircraft could have direct communication to an orbiter and may or may not continue to work with a landed asset. Future helicopters could be used to explore special regions with exposed water ice or brines, where Earth microbial life could potentially survive. Mars helicopters may also be considered for fast retrieval of small sample caches back to a Mars ascent vehicle for return to Earth such as the one to be launched in 2026.

NASA's JPL and AeroVironment published the conceptual design in 2014 for a scout helicopter to accompany a rover. By mid 2016, US$15 million was being requested to keep development of the helicopter on track. By December 2017, engineering models of the vehicle had been tested in a simulated Martian atmosphere and models were undergoing testing in the Arctic, but its inclusion in the mission had not yet been approved nor funded. The United States federal budget, announced in March 2018, provided US$23 million for the helicopter for one year and it was announced on 11 May 2018 that the helicopter could be developed and tested in time to be included in the Mars 2020 mission. The helicopter underwent extensive flight-dynamics and environment testing, and was then mounted on the underside of the Perseverance rover in August 2019. Its mass is just under 1.8 kg (4.0 lb) and JPL has specified that it is planned to have a design life of 5 flights on Mars. The helicopter was named by Vaneeza Ruppani, an 11th grader at Tuscaloosa County High School in Northport, Alabama, who submitted an essay into NASA's "Name the Rover" contest. NASA has invested about US$80 million to build the Mars Helicopter Ingenuity and about US$5 million to operate the helicopter.

Interactive image map of the global topography of Mars, overlain with locations of Mars landers and rovers. Hover your mouse over the image to see the names of over 60 prominent geographic features, and click to link to them. Coloring of the base map indicates relative elevations, based on data from the Mars Orbiter Laser Altimeter on NASA's Mars Global Surveyor. Whites and browns indicate the highest elevations (+12 to +8 km); followed by pinks and reds (+8 to +3 km); yellow is 0 km; greens and blues are lower elevations (down to −8 km). Axes are latitude and longitude; Polar regions are noted.
(See also: Mars map, Mars Memorials, Mars Memorials map) (view • discuss)
(  Active Rover •  Active Lander •  Future )