Metuchen (/məˈtʌtʃən/ mə-TUTCH-ən) is a suburban borough in Middlesex County, New Jersey, United States. The borough is a bedroom suburb of New York City, located in the heart of the Raritan Valley region within the New York Metropolitan area. The borough, along with Edison (which completely surrounds Metuchen), is a regional commercial hub for Central New Jersey. The borough is 5 miles (8.0 km) northeast of New Brunswick, 19 miles (31 km) southwest of Newark, 26 miles (42 km) southwest of Jersey City, and 33 miles (53 km) southwest of Manhattan. As of the 2010 United States Census, the borough's population was 13,574, reflecting an increase of 734 (+5.7%) from the 12,840 counted in the 2000 Census, which had in turn increased by 36 (+0.3%) from the 12,804 counted in the 1990 Census.

Metuchen was incorporated as a borough by an act of the New Jersey Legislature on March 20, 1900, from portions of Raritan Township (now known as Edison).

The earliest residents of the area were the Raritan people of the Lenape Native Americans, who lived in the area and travelled through it to the shore. In 1646, Chief Matouchin was part of a group that included 1,200 warriors.

Until 1870, what is now Metuchen was part of Woodbridge Township. Because the settlers in the western part of the township were so far removed from the main settlement of Woodbridge, they early-on developed a separate identity. The name "Metuchen" first appeared in 1688/1689, and its name was derived from the name of a Native American chief, known as Matouchin or Matochshegan. In 1701, an overseer of roads was appointed for "Metuchen district". In 1705, Main Street was laid out at the same time as the road from Metuchen to Woodbridge, which one source calls a "reworking of the original road".

Sometime between 1717 and 1730, a meeting house was constructed for weekday meetings conducted by the pastor of the Woodbridge Presbyterian Church. In 1756, Metuchen Presbyterians succeeded in forming their own congregation, attesting to their growing numbers. In 1770, the congregations merged, with Metuchen getting 2/5 of the pastor's services and Woodbridge 3/5; by 1772, Metuchen had grown sufficiently to warrant half of his time. In 1793, the two churches again separated.

From the late 18th to the early 19th century Metuchen grew little. A map of 1799 shows ten buildings in the center of town along Main Street. By 1834, a Presbyterian church, a store, two taverns and about a dozen dwellings could be found. The opening of the Middlesex and Essex Turnpike (now Middlesex Avenue, portions in concurrency with Route 27) in 1806, and the Perth Amboy and Bound Brook Turnpike in 1808 seem not to have spurred growth to any appreciable extent. Not until the beginning of the railroad era did commercial and residential development surge.

In 1836, the New Jersey Railroad was completed to New Brunswick. The construction of a station at Main Street made it inevitable that this would develop as the principal street. A business section soon began to appear between Middlesex Avenue and the railroad tracks, and commercial and service establishments gradually began to assume a more modern aspect (the typical 18th century tavern, for example, was replaced by the equally typical 19th century hotel).

The second half of the 19th century was a period of social, cultural and religious diversification in Metuchen. Between 1859 and 1866 the Reformed Church was organized, the first Catholic mass was celebrated and St. Luke's Episcopal Church was founded. In 1870 both the Building and Loan Association and the library opened, the same year that Raritan Township was incorporated. As the largest village in the new township, Metuchen naturally became its commercial and cultural center and acquired substantial political control. In 1873, the town hosted Howard Newton Fuller and the Rutgers College Glee Club in the first-ever performance of their alma mater. In 1879, the literary and debating society was formed, and in 1883 the Village Improvement Society. By 1882, Metuchen School #15 had an enrollment of 256 pupils, and by 1885 the New Jersey Gazette listed 37 businesses.

The decade of the 1890s was a period of expansion for public utilities. In 1894, telegraph service was begun and in 1897 telephone service begun by the N.Y. and N.J. Telephone Company. In the same year the Midland Water Company began operation and supplied hydrants for "newly formed" volunteer fire companies. In 1899, a new street lighting system was installed. At about the same time a bicycling organization was formed, the Metuchen Wheelmen, which lobbied for improved roads. Trolley service began in 1900. In addition, commerce had grown to such an extent that the New Brunswick Directory listed 91 businesses in 1899.

Metuchen attracted an influx of artists, literary figures and noted intellectuals during this time, acquiring the nickname "the Brainy Boro". One of the Borough's two post offices is named Brainy Boro Station.

The new century began with the borough's incorporation, in 1900.

On November 19, 1981, Metuchen became the Seat of the newly established Roman Catholic Diocese of Metuchen. The diocese includes Hunterdon, Middlesex, Somerset and Warren counties and more than 500,000 Catholics.

Metuchen Borough Hall, dedicated in 2005, replaced a structure built in 1924 during the City Beautiful movement.

The Borough of Metuchen is completely surrounded by Edison, making it part of 21 pairs of "doughnut towns" in the state, where one municipality entirely surrounds another.

Unincorporated communities, localities and place names located partially or completely within the township include Jefferson Park and Robinvale.

Metuchen has been a state-designated "town center" since 1996 and "transit village" in 2001. The borough has been recognized for its smart growth development. Plans to build a residential and commercial center with 700 parking spaces on a parking lot adjacent to the train station were announced in July 2014.

Metuchen includes a variety of public spaces, historical sites, a war memorial, and a greenway.

The Middlesex Greenway is a 3.5-mile (5.6 km) mixed-use bicycle and pedestrian paved trail between Metuchen and Woodbridge Township. It is part of the East Coast Greenway.

Covering 13 acres (5.3 ha), Centennial Park is Metuchen's largest park and is accessible from Grove Avenue. The park includes Beacon Hill, which at 169 feet (52 m) is the highest point in the borough.

Metuchen Memorial Park is a war memorial that was created starting in 1925 to honor those who served during World War I and has been updated since then to honor those Metuchen residents who served in other of the nation's wars. For 90 years, the park has been the planned destination of the borough's annual Memorial Day Parade.

The Dismal Swamp is a nearby natural area known as the "Everglades of Central New Jersey." 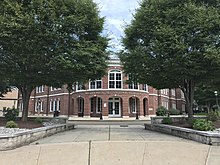 Metuchen is governed under the Borough form of New Jersey municipal government, which is used in 218 municipalities (of the 565) statewide, making it the most common form of government in New Jersey. The governing body is comprised of the mayor and the borough council, with all positions elected at-large on a partisan basis as part of the November general election. A mayor is elected directly by the voters to a four-year term of office. The borough council is comprised of six members elected to serve three-year terms on a staggered basis, with two seats coming up for election each year in a three-year cycle. The Borough form of government used by Metuchen is a "weak mayor / strong council" government in which council members act as the legislative body with the mayor presiding at meetings and voting only in the event of a tie. The mayor can veto ordinances subject to an override by a two-thirds majority vote of the council. The mayor makes committee and liaison assignments for council members, and most appointments are made by the mayor with the advice and consent of the council.

In January 2019, the borough council unanimously selected Daniel Hirsch from a list of three candidates nominated by the Democratic municipal committee to fill the seat expiring in December 2020 that became vacant following the resignation of Reed Leibfried. Hirsch served on an interim basis until the November 2019 general election, when he was elected to serve the balance of the term of office.

In December 2017, Jonathan Busch was selected from three names submitted by the Democratic municipal committee to fill the seat expiring in December 2019 that had been held by Peter Cammarano until he resigned from office to become the chief of staff for Governor of New Jersey Phil Murphy.

Metuchen is located in the 6th Congressional District and is part of New Jersey's 18th state legislative district.

For the 2018–2019 session (Senate, General Assembly), the 18th Legislative District of the New Jersey Legislature is represented in the State Senate by Patrick J. Diegnan (D, South Plainfield) and in the General Assembly by Robert Karabinchak (D, Edison) and Sterley Stanley (D, East Brunswick).

Template:NJ Middlesex County Board of Commissioners

The Metuchen School District serves students in pre-kindergarten through twelfth grade. As of the 2017–18 school year, the district, comprised of four schools, had an enrollment of 2,287 students and 179.2 classroom teachers (on an FTE basis), for a student–teacher ratio of 12.8:1. Schools in the district (with 2017–18 enrollment data from the National Center for Education Statistics) are Mildred B. Moss School (166 students; in PreK/K), Campbell Elementary School (675; 1-4), Edgar Middle School (724; 5-8) and Metuchen High School for grades 9–12 (694).

Eighth grade students from all of Middlesex County are eligible to apply to attend the high school programs offered by the Middlesex County Vocational and Technical Schools, a county-wide vocational school district that offers full-time career and technical education at Middlesex County Academy in Edison, the Academy for Allied Health and Biomedical Sciences in Woodbridge Township and at its East Brunswick, Perth Amboy and Piscataway technical high schools, with no tuition charged to students for attendance.

There have been two historical schools named for Benjamin Franklin. The Old Franklin Schoolhouse is a one-room school on Route 27 (Middlesex Avenue) near Main Street built in 1807 and used until 1870. In 1906, it was acquired and restored by the Borough Improvement League and is currently used as a community music venue. A larger Franklin School, built in 1906, once stood at the intersection of Middlesex and Lake Avenues but fell into disrepair in the mid-1980s. It has since been demolished to make way for a residential development called Franklin Square.

The borough is home to St. Joseph High School, a private all-boys Catholic prep school, notable for its academics and sports awards, that is conducted by the Brothers of the Sacred Heart and operated under the supervision of the Roman Catholic Diocese of Metuchen. Saint Francis Cathedral School, a PreK-8 school also operated as part of the Roman Catholic Diocese of Metuchen, was one of eight private schools recognized in 2017 as an Exemplary High Performing School by the National Blue Ribbon Schools Program of the United States Department of Education.

Commuting had become a way of life for Metuchen residents by the start of the 20th century. Daily commuters numbered 400 out of a population of 1,786 by the year 1900. Accessibility to New York City and New Brunswick enhanced the borough's reputation as a place to live, and the modern suburban ideal of small-town life where tired businessmen could escape the pace of the city grew in popularity.

View north along I-287, the largest and busiest road in Metuchen

The biggest change to affect Metuchen between the World Wars was the rise of the automobile. In the 1920s, service stations were built, and the construction of U.S. Route 1 just south of Metuchen in 1930 diverted traffic away from Middlesex Avenue, helping the borough retain its residential character.

Both Route 27 and CR 531 pass through and intersect at the heart of the borough, while Interstate 287 runs along the southern border. Metuchen also includes portions of CR 501, CR 660 and CR 669.

Other limited access roads are nearby, such as the New Jersey Turnpike (Interstate 95) in surrounding Edison Township and the Garden State Parkway in Woodbridge Township.

People who were born in, residents of, or otherwise closely associated with Metuchen include: