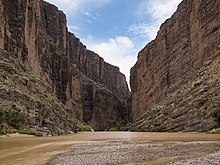 The Mexico–United States international park is a proposed and partially completed cross-border wilderness park straddling the part of the U.S.–Mexico boundary delineated by the Rio Grande.

In 1933, the Chamber of Commerce in Alpine, Texas, commissioned a landscape architect to design an international park for the Big Bend region.

In 1935, a U.S. Senator from Texas wrote to U.S. President Roosevelt proposing an international park overlapping the U.S.–Mexico border.

In 1935, or 1936, the U.S. and Mexico established a commission to establish Big Bend International Park.

In 1938, the Dallas Morning News reported on proposals for a Big Bend International Peace Park.

In June 1944, Big Bend National Park came into being. That same month, U.S. President F. D. Roosevelt wrote to Mexican President Manuel Ávila Camacho expressing a desire for the area on both sides of the Rio Grande to form one great international park. President Camacho agreed with Roosevelt's aim.

In his 1951 essay Chihuahua as We Might Have Been, J. B. Jackson argued for mutual co-operation to restored continuity between the ecosystems either side of the border.

In 1983, Mexican President Miguel de la Madrid Hurtado signed an agreement with U.S. President Ronald Reagan to protect, improve and conserve the environment along the border.

In 1994, the Maderas del Carmen protected area was established in Mexico, as was Mexico's Santa Elena Canyon.

In 2009, Mexico made its side of the Rio Grande and the Ocampo Flora and Fauna south of Big Bend National Park into protected areas.

In October 2011, U.S. Interior Secretary Ken Salazar and Mexican Environment and Natural Resources Secretary Juan Rafael Elvira Quesada outlined the Cooperative Action for Conservation in the Big Bend/Rio Bravo Region, a plan already underway that identified "the next steps for the continued coordination between the two countries in the protection and preservation of the transnational Big Bend/Rio Bravo region – North America's largest and most diverse desert ecosystem."