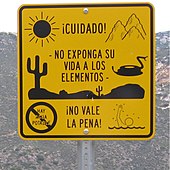 Border Patrol sign in Spanish, in California warning "Caution! Do not expose your life to the elements. It's not worth it!"

Migrant deaths along the Mexico–U.S. border occur hundreds of times a year as people attempt to cross into the United States from Mexico illegally. The US Border Patrol reported 294 migrant deaths in the fiscal year 2017 (ending September 30, 2017), which was lower than in 2016 (322), and any year during the period 2003-2014. Exposure (including heat stroke, dehydration, and hyperthermia) were the leading cause.

The group Border Angels estimates that since 1994, about 10,000 people have died in their attempt to cross border. According to the U.S. Customs and Border Protection, 7,216 people have died crossing the U.S–Mexico border between 1998 and 2017. In 2005, more than 500 died across the entire U.S.–Mexico border. The number of yearly border crossing deaths doubled from 1995 to 2005, before declining. The statistics reflect only known deaths and do not include those who have never been found.

U.S. Border Patrol reported that 3,221 migrants were rescued in the fiscal year 2017.

The Arizona Daily Star maintained a database daily of border deaths recorded by the Pima, Santa Cruz, Cochise, and Yuma County medical examiners between summer 2004 and September 2006. They stated, "With no official record-keeping system, the exact number of illegal entrants who have died along the Arizona stretch of U.S-Mexican border has never been known".

Mexico–United States barrier at the border of Tijuana, Mexico and San Diego, USA. The crosses represent migrants who have died in crossing attempts. Some who are identified, some not. Surveillance tower in the background.

The number of deaths of illegal immigrants along the border has increased on a regular, yearly basis since the middle 1990s, particularly in the state of Arizona. As of summer 2006, tighter enforcement in Arizona has likely led to fewer deaths there, but border wide fatalities were approaching the record pace of 2005.

In 2012, the United States Border Patrol found the remains of 463 migrants in the U.S., of which 177 were discovered along the section of the border near Tucson, Arizona. The Rio Grande Valley of South Texas reported 150 migrant remains found, a jump from 2011 due to the increased numbers of Central American migrants.

Hyperthermia is one of the most common causes of migrant border deaths in the U.S.

A common cause of immigrant border deaths is drowning in canals, ditches, and the Rio Grande.

Significant numbers of illegal immigrants die daily in car accidents and other accidental causes. According to a December 2006 cover story in the San Diego Reader, "...traffic fatalities involving immigrants have more than doubled since 2003 as coyotes, or polleros – the guides leading migrants across the border – try other methods. On August 7, nine migrants died in a crash in the Yuma sector when the driver of a Chevrolet Suburban – in which 21 Mexicans were "stacked like cordwood – lost control after crossing a Border Patrol spike strip at high speed. This year the number killed in traffic accidents during illegal crossings is about 50."

In January 2003, two illegal immigrant passengers died when their truck crashed on Interstate 8 while fleeing the Border Patrol, after a spike strip punctured a tire. A week after the accident, a third person, Elvia Rumbo Leyva, died in the hospital.

Close to one hundred illegal immigrants were struck and killed on San Diego County freeways over a five-year span in the late 1980s, prompting the creation of a highway safety sign to caution drivers about migrants crossing the road.

Incidents of Border Patrol use of force

According to Rodolfo Acuña, Professor Emeritus of Chicano Studies at California State University, "Mexico's Ministry of Foreign Affairs reported 117 cases of human rights abuses by US officials against migrants from 1988 to 1990, including fourteen deaths. During the 1980s, Border Patrol agents shot dozens of people, killing eleven and permanently disabling ten."

On May 28, 1994, Martín García Martínez was shot by a Border Patrol agent at the San Ysidro port of entry. He died on July 3 as a result of his injuries.

In May 2000, an illegal immigrant was shot in the shoulder by a border patrolman near Brownsville, Texas, and died later from the wounds.

In January 2006, an eight-year veteran of the Border Patrol, fearful of stones which were being thrown at him shot Guillermo Martinez Rodriguez, a known people smuggler who had been detained 11 times prior. Rodriguez, with a gunshot to the back of his right shoulder, crossed back to Mexico and was taken to the Red Cross in Tijuana where he died twenty-five and a half hours later from the injury. Under the Border Patrol's use-of-force guidelines, agents are permitted to employ lethal force against rock throwers if they pose a threat. Large rocks have seriously injured many agents and many agents have resorted to wearing riot gear as a result.

In January 2007, border patrol agent Nicholas Corbett shot and killed Francisco Javier Domínguez Rivera after the latter tried to smash his head with a rock according to the officer's lawyer. After the agent was acquitted of wrongdoing, a civil suit was filed on behalf of Rivera's parents. This civil suit claimed that the United States government was responsible for wrongful death of Rivera due to the fact that the agent was performing his official duty. Mexico lodged an official protest with the United States over the death stating its "firm condemnation" and "serious concern over the recurrence of this type of incident." The protest demanded an exhaustive investigation. Though the incident was recorded by surveillance cameras, the recording was not very clear.

On May 28, 2010, Anastasio Rojas, a 42-year-old Mexican migrant worker, was tased and beaten at the San Ysidro border crossing by more than a dozen Customs and Border Protection officers. Rojas' death was featured on the PBS News Magazine "Need to Know" in April 2012, in which several civilian eyewitnesses gave their testimony and provided two amateur videos of the event. According to the witnesses, he was facedown on the ground and handcuffed while he was being tased and beaten, all the while being surrounded by twelve officers. His pleas for help is clearly audible on the amateur footage. In the hours before Rojas' death, he had tried to file a complaint against a Border Patrol officer for kicking his injured ankle, that officer and another officer would later drive Rojas to the border alone at night, soon after Rojas sustained fatal injuries. Since the initial broadcast of "Need to Know", 16 members of congress have demanded a justice department investigation into Anastasio Rojas' death while in Border Patrol's custody, which is currently under way. He leaves behind a wife and five children.

On June 2010, a 15-year-old Mexican citizen was shot to death on the Mexican side of the border near El Paso, Texas. The U.S. Border Patrol reported that the officers responded to a group of suspected illegal immigrants who were throwing rocks at them. President Felipe Calderón criticized the shooting by stating that "the use of firearms to repel attacks with stones represents disproportionate use of force".

On 14 September 2018, US media reported that Jacklyn the 7-year-old from Guatemala had died while in custody of US Customs. The girl’s family denied she did not have enough food to eat before she died.

According to Time Magazine, in the first half of 2000, three immigrants were killed and seven others wounded in showdowns on the U.S. side of the border.

In 2000, the United Nations opened an investigation into vigilante killings of migrants crossing Mexico's border with the U.S., dispatching a senior UN investigator to the border country close to where Sam Blackwood, a 74-year-old rancher, was charged with killing Eusebio de Haro, an unarmed Mexican he tried to subdue for the border patrol and shot in the back of the thigh, causing him to bleed to death after pursuing him a quarter mile down the road in his truck.

The impact of migrant deaths on border communities can be difficult for small towns on the U.S. side, which have found themselves with hundreds of remains to identify and bury, at a cost of hundreds of thousands of dollars. In November 2013, the Office of the Medical Examiner in Pima County, Arizona, had 871 cases of unidentified remains dating as far back as the 1990s. Relief groups often aid migrants traveling along the border. A Mexican federal task force known as Grupos Betas protects migrants from crime while the migrants make the journey north. Other groups such as 'No More Deaths' provide migrants with humanitarian assistance and members participate in 'desert runs' to search for migrants in need of help.

Retrieved from "https://en.wikipedia.org/w/index.php?title=Migrant_deaths_along_the_Mexico–United_States_border&oldid=1007658524"
Uses material from the Wikipedia article Migrant deaths along the Mexico–United States border, released under the CC BY-SA 3.0 license.