The Ministry of Foreign Affairs (Ministerstwo Spraw Zagranicznych, MSZ) is the Polish government department tasked with maintaining Poland's international relations and coordinating its participation in international and regional supra-national political organisations such as the European Union and United Nations. The head of the ministry holds a place in the Council of Ministers. 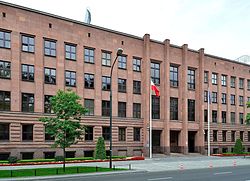 The current seat of the Ministry of Foreign Affairs, located on Szucha Avenue 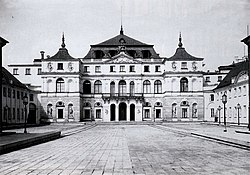 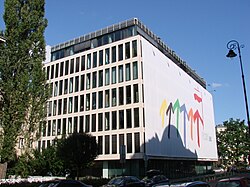 The MSZ's new extension, Articom office building at 21 Szucha Avenue, which in 2011 displayed a large-scale version of Poland's then-presidency of the Council of the European Union.

Remit and responsibilities of the ministry

The Ministry of Foreign Affairs is responsible primarily for maintaining good, friendly relations between the Polish Republic and other states. In doing so it is required to act primarily as a representative of the Polish people. To this end all Polish diplomatic missions around the world are subordinate to the Ministry of Foreign Affairs. Ambassadors, whilst receiving their credentials from the President of Poland, are employees of the foreign ministry and are recommended to the President for their posts by the minister of foreign affairs.

The ministry is considered to be one of Poland's most important, with the minister of foreign affairs ranking amongst the most influential people in Polish politics. This position is typically reserved for seasoned, professional politicians, and is thought to require a great deal of tact and intellect.

The Ministry of Foreign Affairs was first established, with Leon Wasilewski as its secretary, under the authority of the Regency Council when Poland regained (albeit in name only) its independence from the occupying German forces in the First World War. However, the ministry began to fulfil its ascribed duties truly only after the fall of the Regency Council, adoption of the Treaty of Versailles and the rise to power of Józef Piłsudski. The ministry was then, until 1939, located in central Warsaw, with its seat in the Brühl Palace on Piłsudski Square. During the Second World War, the ministry was evacuated, along with the rest of the Polish government, first to France and then onwards to London, where it formed part of the Polish government in exile. During this period Count Edward Raczyński, a man who was later to become President of the government in exile, was the minister responsible. After 1945, when most countries began to afford diplomatic recognition to the new communist government in Warsaw, at the expense of the government in exile, the authorities of the new Polish People's Republic refounded the ministry and appointed, as its first minister, Edward Osóbka-Morawski.

Since 1989 and the establishment of the Third Republic, the ministry and its staff have been located in a complex of buildings on Aleje Szucha in central Warsaw, not far displaced from the Chancellery of the Prime Minister.

The departments for regional affairs exist to monitor the internal situation and politics of the countries within the area of any one specific department's competence. They coordinate development of bilateral relations, initiate the related undertakings and prepare evaluations. These departments oversee the issue of Poland's participation in the structures of multilateral cooperation with any relevant partner states, as well as handling interregional cooperation. They are responsible for the substantive activity of relevant Polish diplomatic missions abroad.

Ministers of Foreign Affairs (since 1989)

The Polish government-in-exile had a wide international recognition until 1945, and limited to just few countries until the 1970s

Retrieved from "https://en.wikipedia.org/w/index.php?title=Ministry_of_Foreign_Affairs_(Poland)&oldid=987439890"
Uses material from the Wikipedia article Ministry of Foreign Affairs (Poland), released under the CC BY-SA 3.0 license.