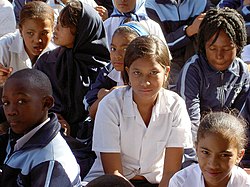 School children at Mitchells Plain school. They draw learners from Khayelitsha and Philippi as well.

Mitchells Plain is a township in the Western Cape, South Africa about 28 km (17 mi) from the city of Cape Town. It is one of South Africa's largest townships . It is located on the Cape Flats on the False Bay coast between Muizenberg and Khayelitsha. Conceived of as a "model suburb" by the apartheid government, it was built during the 1970s to provide housing for Coloured victims of forced removal due to the implementation of the Group Areas Act. The township was reportedly named after Mitchell Baker but this is unconfirmed, and is one of a number of possible explanations.

At an estimated population of 290,000 - 305,000 people, it comprises a number of sub-sections which reflect the diverse class backgrounds of the population. Once a major stronghold of the United Democratic Front, the broad-based ANC-sponsored anti-apartheid body, it is now known more for gangsterism and methamphatemine addiction among the youth. It also has one of greater Cape Town's biggest shopping centres, the Liberty Promenade.

Mitchells Plain was created by the apartheid government in the early 1970s as a Coloured township for middle-income families. The township was laid out in terms of the neighbourhood unit concept with large open spaces, localised public facilities and wide arterial routes. Various forms of housing were provided including, freestanding, semi-detached and duplex housing. However, by the late 80's and 90's, major areas of Mitchells Plain deteriorated into urban ghettos. Gangsterism and drug abuse has increased and a number of informal settlements has sprung up in several areas.

According to 2011 census data compiled by Statistics South Africa, Mitchells Plain comprises the following in terms of demographics:

Today Mitchells Plain is one of Cape Town's and South Africa's largest townships with a population of about 290,000 people.

In terms of economic activity, investment is primarily in retail development with Mitchell's Plain being considered as having the strongest level of investment on the Cape Flats. It has a central business district (CBD), locally called the "Town Centre" and three large shopping centres; Promenade Shopping Centre on AZ Berman Drive, Westgate Mall on the corner of Morgenster and Vanguard Drive and Watergate Shopping Centre, completed in 2017, on the corner of the Cape Flats Freeway (R300) and AZ Berman Drive. The Promenade Shopping Centre is the largest with more than 120 stores comprising major clothing, furniture, banks and restaurant chains. Informal economic activity is a significant part of the local economy. Such activity reflects a dominance of retail functions with informal trading responding to market and thus concentrated around the main public transport interchanges and along heavily utilised pedestrian routes.

Mitchells Plain is reasonably well served by public transport services comprising commuter rail, bus and mini-bus taxi services. There are 3 Cape Metrorail commuter rail stations within the area at Kapteinsklip, Mitchell's Plain and Lentegeur. The rail line extends northwards towards Philippi, Cape Town's CBD and the industrial areas at Epping. The commuter rail service is commonly characterised by overcrowding during morning and afternoon peak periods as well as being unsafe during off-peak periods.

The Mitchell's Plain Public Transport Interchange at the Mitchell's Plain Station include a major bus terminus and taxi rank which provides public transport services to every major employment area within the City of Cape Town during the morning peak period. There is regular scheduled bus and unscheduled mini-bus taxi services to Cape Town CBD, Claremont, Bellville, Wynberg, and other areas. At more than 30 000 passenger trips per weekday and more than 90,000 passengers daily, it is one of the busiest transport interchanges in the city. Recent years have seen significant investment by the local authority in improving and upgrading public transport infrastructure and facilities at the Mitchell's Plain Interchange.

The Mitchells Plain Commercial Business District is commonly referred to as the Town Center by residents. It is a shopping district that includes a 58 000 square meter retail plaza, a shopping centre over and around in the train station, a public library, two major transport interchanges and informal markets. Informal traders in the Town Center sell fruit, vegetables, stationary, spices and cosmetics.

Like the townships of Soweto, Khayelitsha and Delft, Mitchells Plain, believed to be South Africa's 3rd largest township, is split into a number of sub-sections. The western half of the township is home to a wealthier population, while the eastern half comprises poorer communities.

In the latter years of apartheid, Mitchells Plain became the seat of the launch of the United Democratic Front, a mass democratic movement of community organisations and trade unions fighting against apartheid. It was launched in August 1983 with such leaders of the people as Dr Allan Boesak, Albertina Sisulu, Helen Joseph, Joe Marks, Trevor Manuel, Mosiuoa "Terror" Lekota and many others present.