The tomb of the singer Dalida in Montmartre Cemetery.

The Cemetery of Montmartre (French: Cimetière de Montmartre) is a cemetery in the 18th arrondissement of Paris, France, that dates to the early 19th century. Officially known as the Cimetière du Nord, it is the third largest necropolis in Paris, after the Père Lachaise Cemetery and the Montparnasse Cemetery.

In the mid-18th century, overcrowding in the cemeteries of Paris had created numerous problems, from impossibly high funeral costs to unsanitary living conditions in the surrounding neighborhoods. In the 1780s, the Cimetière des Innocents was officially closed and citizens were banned from burying corpses within the city limits of Paris. During the early 19th century, new cemeteries were constructed outside the precincts of the capital: Montmartre in the north, Père Lachaise Cemetery in the east, Passy Cemetery in the west and Montparnasse Cemetery in the south.

The Montmartre Cemetery was opened on 1 January 1825. It was initially known as le Cimetière des Grandes Carrières (Cemetery of the Large Quarries). The name referenced the cemetery's unique location, in an abandoned gypsum quarry. The quarry had previously been used during the French Revolution as a mass grave. It was built below street level, in the hollow of an abandoned gypsum quarry located west of the Butte near the beginning of Rue Caulaincourt in Place de Clichy. As is still the case today, its sole entrance was constructed on Avenue Rachel under Rue Caulaincourt.

A popular tourist destination, Montmartre Cemetery is the final resting place of many famous artists who lived and worked in the Montmartre area. See the full list of notable interments below.

The Montmartre Cemetery with the Rue Caulaincourt viaduct passing through it 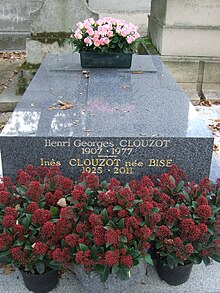 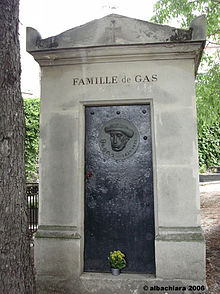 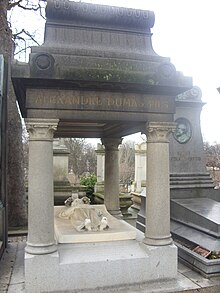 The tomb of Alexandre Dumas, fils 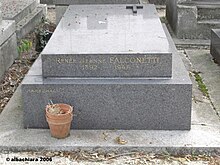 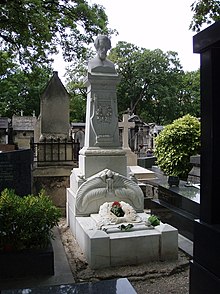 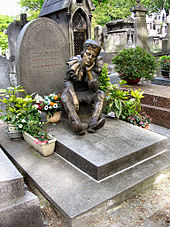 Tombstone of Vaslav Nijinsky in Cimetière de Montmartre in Paris. The statue shows Nijinsky as the puppet Petrouchka. 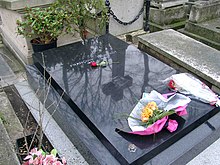