Kat and Daisy are total opposites. Kat, the younger sister, is an aspiring astronomer working at the planetarium in the Whaling Museum of the Mystic Seaport, who has been accepted to Yale University on a partial scholarship. Kat works at the restaurant at night and as a babysitter by day, in order to raise money for school. Daisy's sole goal is to leave Mystic and to have as much fun as possible while she is still stuck there. Their Portuguese mother clearly favors Kat for her goals and drive, while often questioning Daisy's life choices.

Daisy meets a wealthy, handsome young man named Charles at a bar. The two are immediately attracted to each other and begin a relationship, much to her mother's dismay. However, at a family dinner, his relatives unintentionally make insensitive comments about her ethnicity, and Charles overreacts. Daisy breaks up with him, believing that his family's remarks were harmless and accusing him of using her to rebel against his parents.

Kat finds herself infatuated with her employer Tim, an architect and Yale graduate who has hired her to look after his four-year-old daughter Phoebe, while his wife is working in England. A relationship ultimately develops between them that she believes is love, and they have sex. However, when the wife returns, Kat's illusions are shattered. Daisy consoles her devastated sister and they bond.

Jojo wants to continue having sex with her boyfriend Bill, whom she previously attempted to marry, but fainted at their wedding due to experiencing cold feet. However, Bill refuses to have sex with her until they are married, which is something she still is not ready for. Bill eventually breaks up with Jojo, believing that she does not truly love him and is only after him for sex.

Later, a famous television food critic nicknamed "The Fireside Gourmet" unexpectedly visits Mystic Pizza. As Kat, Daisy, Jojo, and Leona watch from the counter, he takes a few bites of one slice, jots notes in his notebook, and leaves after paying the check. His approval can do wonders for a restaurant, but they are not optimistic. However, a few days later, the critic gives the pizzeria his highest rating, calling it "superb". The restaurant phone immediately starts ringing, with Leona laughing as she informs the caller that no reservations are needed.

In the end, Tim brings Phoebe to Mystic Pizza because she wants to say goodbye to Kat. Tim gives her a check to help cover her tuition expenses, but she tears it up; she later accepts money from Leona. Jojo finally agrees to marry Bill, and Daisy and Charles reconcile at their wedding. The film ends with the three girls together overlooking the water from the balcony of the restaurant, reminiscing about their time together. 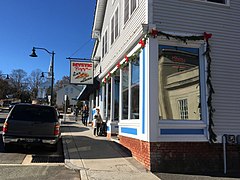 The title of the film was inspired by a pizza shop in Mystic, Connecticut. Screenwriter Amy Holden Jones was summering in the area and chose Mystic Pizza as the focus of her story about the lives of three young waitresses.

Jones was set to direct, but was replaced by Petrie, who made his feature film directorial debut. The film was also Alfred Uhry's screenwriting debut. 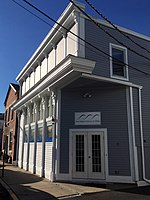 Filming began October 12, 1987 and was due to last six weeks. The film's plot is set in Mystic, but most of the filming locations were in neighboring towns. The building used for the pizza restaurant was a converted home in Stonington Borough at 70 Water St. After the film's release, the real-life Mystic Pizza building in downtown Mystic was renovated to resemble the film set. The Windsor family home, the wedding reception restaurant, the Peg Leg Pub pool hall, and the fishing docks were also filmed in Stonington Borough. The hitchhiking incident takes place on North Main Street in Stonington Town. The Araújo home is in Pawcatuck, Connecticut; the lobster business and the wedding church are in Noank, Connecticut. Tim Travers' home and the Windsors' country club are in Watch Hill, Rhode Island. The most notable scenes that take place in Mystic were filmed at the Mystic Seaport planetarium and at the Mystic River Bascule Bridge.

Goldwyn spent a company record $6.5 million on prints and advertising and other marketing activities, including tie-ins with Domino's Pizza and others. The film had 100 pre-opening screenings and premiered in Mystic, Connecticut on October 18, 1988. It was released on October 21, 1988.

The film received mostly favorable reviews, who praised the performances by the three lead actresses. It received "two thumbs up" from popular film critics Siskel and Ebert, giving particular praise to the three female leads, including Gish, whom Ebert likened to a "young Katharine Hepburn". He also noted that the film "may someday become known for the movie stars it showcased back before they became stars." Variety called it "a deftly told coming-of-age story about three young femmes as they explore their different destinies, mostly through romance, it’s genuine and moving, with enough edge to impress contemporary audiences."

The film currently has a Rotten Tomatoes score of 75% from 24 reviews. The website's critics consensus reads: "Mystic Pizza is like its namesake food: it's cheesy, topped with romance, and rises to the occasion." The film receive a score of 60 based on ten reviews, indicating "mixed or average reviews".

On January 22, 2019, it was announced that Mystic Pizza will be adapted into a stage musical. Melissa Etheridge will write the score, while Gordon Greenberg will direct and co-write the book with Sas Goldberg. This comes years after a fictional Broadway musical adaptation of the film had served as a plot point in the early part of season 2 of the NBC sitcom 30 Rock in 2007.