The N1 is a national route in South Africa that runs from Cape Town through Bloemfontein, Johannesburg, Pretoria and Polokwane to Beit Bridge on the border with Zimbabwe. It forms the first section of the famed Cape to Cairo Road.

Prior to 1970, the N1 designation was applied to the route from Beit Bridge to Colesberg and then along the current N9 to George. The section from Cape Town to Colesberg was designated the N9. 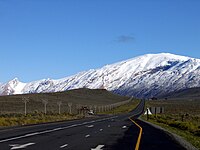 The N1 begins in central Cape Town at the northern end of Buitengracht Street, outside the entrance to the Victoria & Alfred Waterfront. The first section of the N1 is shared with the beginning of the N2; it is a four-lane elevated freeway that runs along a strip of land between the city centre and the Port of Cape Town. On the eastern edge of the city centre the two roads split, and the N1 turns east as Table Bay Boulevard, passing the Ysterplaat Air Force Base and Century City before the N7 intersects it on its own way out of the city towards Namibia. Major improvements have been made to the Koeberg Interchange, where the N1 meets the M5, one of the main arterial routes linking Milnerton with the Southern Suburbs.

The N1 then heads through the suburbs of Goodwood and Bellville, where the R300 terminates at it, before heading towards Paarl. At Paarl, the freeway ends, and the N1 is tolled as it passes through the Huguenot Tunnel running underneath the Du Toitskloof Mountains; the tunnel was opened in the late 1980s to replace the old Du Toitskloof Pass running over the mountain. After emerging from the tunnel, the N1 winds through the Molenaar River Valley (which is a short dual carriageway section) before emerging from the valley and heading towards Worcester, bypassing Rawsonville. From Worcester, the route heads through the Hex River Valley and then enters the Karoo by ascending the Hex River Pass.

Currently only the section of the N1 passing through the Huguenot Tunnel is tolled, although there are plans to toll the N1 from the junction with the R300, roughly to De Doorns. This would allow for upgrading of the N1, most especially the opening and construction of the Northern Bore of the Huguenot Tunnel so that two lanes of traffic could pass in each direction through the tunnel, and the building of grade separated junctions along the N1 through Worcester. Although the town is bypassed, there are a number of traffic lights on the N1 through Worcester.

From the top of the pass, the N1 passes Touws River and Matjiesfontein before passing through Laingsburg, then heads towards Beaufort West. The 200 km section between Laingsburg and Beaufort West is notorious for claiming many lives in fatigue-related accidents; also, the N1 begins to turn towards the north-east along this stretch of road. Just before Beaufort West, the N12 from George meets the N1; the N12 and the N1 routes are co-signed through Beaufort West and for the next 75 km before splitting at Three Sisters. The N12 later meets the N1 again in Johannesburg, making the N12 an alternative route to the N1, passing through Kimberley instead of Bloemfontein. Although parts of the N12 between Warrenton and Klerksdorp are in poor condition (although in process of being upgraded), the N1 from Bloemfontein northwards is tolled while the N12 is toll-free. Whereas the N12 also passes through most of the towns en route to Johannesburg, the N1 bypasses every town between Beaufort West and Johannesburg (avoiding town centres).

The N1 has a short section in the Northern Cape; after it passes into this province, it passes through the town of Richmond before intersecting with the N10 at Hanover. The N1 then continues towards Colesberg, where the N9 terminates where it meets the N1. After Colesberg, the N1 crosses the Orange River and enters the Free State.

The N1 southbound as it enters Ventersburg

After the Orange River crossing, the N1 makes a direct line for Bloemfontein, heading in a more northerly direction. The N1 from Colesberg to Bloemfontein is highly significant because it was the first single-carriageway freeway built in South Africa. The bridges with the interchanges at Edenburg and Trompsburg show the ambitious plans for this road as a dual-carriage freeway. Just before reaching Bloemfontein, the N6 from East London terminates where it meets the N1. This intersection marks the beginning of the Bloemfontein Western Bypass, which is the first freeway section on the route since Paarl. The N8 WEST from Kimberley intersects with the N1 bypass, joining it for 3 km, before heading EAST through the central parts of Bloemfontein and then to Maseru in Lesotho.

The N1 is signed as a toll road from the N6 interchange until its end at Beit Bridge. The N1 becomes a single carriageway freeway a few kilometres north of Bloemfontein after passing the R30 to Brandfort; however, construction work is in progress to extend the freeway for another 20 km by building a second carriageway. Once the freeway ends, the road will be a single carriageway but with two lanes in each direction until 5 km before the toll plaza at Verkeerdevlei, halfway between Bloemfontein and Winburg. Initial plans were for the N1 from Winburg to Bloemfontein to be a dual-carriageway freeway. At Winburg, the N5 splits from the N1, which bypasses the north of Lesotho before its own termination at the N3 in Harrismith.

Many motorists from Cape Town heading for Durban travel the N1 to Winburg, and then N5 to Harrismith as an alternative to reach Durban. This is due to the much better quality of this route compared with the N2, especially between Port Shepstone and Grahamstown.

The N1 continues north and passes through Ventersburg before reaching Kroonstad. There the R34 from Welkom joins the N1 Freeway for a few kilometres before making its own way towards Heilbron. There is a short dual carriageway freeway bypass of Kroonstad, before the N1 heads towards the Vaal River and Gauteng. Just before passing into Gauteng at the Vaal River, the N1 becomes a dual-carriageway freeway and features another toll plaza (the Vaal Toll Plaza) just south of its major interchange with the R59 Road, which provides access to the Vaal Triangle (Vereeniging and Sasolburg) in the east and Parys in the west. 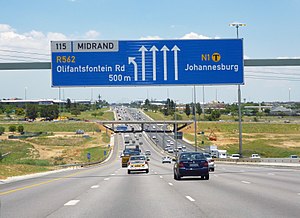 The N1 between Johannesburg and Pretoria as part of the Ben Schoeman Highway.

After crossing the Vaal River, the N1 continues towards Johannesburg, bypassing Vanderbijlpark and featuring another toll plaza at Grasmere. At the southern outskirts of Johannesburg, the N12 once again meets the N1, and they are co-signed northwards for a few kilometers (bypassing Soweto) before the N12 splits off to become the Southern Bypass portion of the Johannesburg Ring Road. From just north of the Vaal River the N1 changes from being a tarred road to a concrete road, until just after the N12. The R553 Road off-ramp in between the two N12 interchanges marks the beginning of the N1 being an e-toll highway (with open road tolling).

The N1 then becomes the Ben Schoeman Highway, heading northwards towards Pretoria (Passing through Midrand); this section carries 300,000 vehicles per day and is purported to be the busiest stretch of road in South Africa. At Centurion, the N1 meets the N14 and they switch highways, with the N14 becoming the Ben Schoeman Highway to Pretoria Central and the N1 becoming the Pretoria Eastern Bypass (named the Danie Joubert Freeway) towards the north-east, proceeding to intersect with the R21 Highway from Johannesburg International Airport at the Flying Saucer Interchange before Pretoria East. After the R21 interchange, the N1 proceeds in a more northerly direction through the eastern suburbs. East of Pretoria CBD, at the Proefplaas Interchange, The N4 National Route from Witbank in the east joins the N1 and they are one highway for a short distance northwards before the N4 becomes its own highway to the west (named the Platinum Highway) towards Rustenburg.

From the interchange with the N4 (Rustenburg turn-off), the N1 is tolled for the remainder of its length, with various toll plazas located along it (Including upon off-ramps). The N1 then heads to the north, bypassing Hammanskraal, and crosses into the Limpopo province.

The N1 then passes near Bela-Bela (previously Warmbaths) and Modimolle (previously Nylstroom). At the Modimolle exit, the freeway ends; the section of freeway between the Vaal River and Modimolle is the longest freeway in South Africa by route number at approximately 265 km (although there are two changes in the alignment of freeway in Gauteng, at Buccleuch and Brakfontein Interchanges. South Africa's longest continuous freeway is the N3 between Durban and Ladysmith, which is approximately 20 km shorter).

The section from the Proefplaas Interchange in Pretoria to the Bela Bela exit is maintained by a private concessionaire, namely Bakwena, under license from SANRAL. The N1 then heads past Mokopane (previously Potgietersrus), where the N11 intersects it at the Nyl Toll Plaza (north off-ramp only) (leaving the N18 and the N17 as the only national roads that do not intersect with the N1), before heading to Polokwane (previously Pietersburg). The Polokwane Eastern Bypass has recently been opened (with parts still being constructed) and is now used by traffic to loop around the Polokwane Town Centre.

After Polokwane, the N1 heads north, crossing the Tropic of Capricorn before passing Louis Trichardt. The N1 then winds through the Soutpansberg Mountains (containing two short tunnels) before heading to Musina (passing the last tollgate before Musina). Plans are underway for a bypass around Musina (it will be an 8km highway west of the Musina CBD; to be completed in October 2021). The route then makes a 16 km line for the Beit Bridge border crossing with Zimbabwe on the Limpopo River.

After crossing into Zimbabwe, the route is no longer known as the N1. It passes through the border town of Beit Bridge on the Zimbabwean side before splitting into two routes: the A6 to Bulawayo and the A4 to Harare.

As the entire N1 National Route from Cape Town to Beit Bridge is registered as the 1st section of the Cape to Cairo Road (proceeding through Harare), there is a section of the route which is part of the Trans-African Highway Network system of the United Nations Economic Commission for Africa.

The section from Cape Town to the split with the N12 National Route at Three Sisters, Northern Cape is declared part of the Trans-African Highway Network no. 4 or Cairo-Cape Town Highway, which is the route designated by the United Nations between Cairo and Cape Town (passing through Gaborone). (The route continues as the N12 northwards from here)

In numerous places in South Africa, specifically near major cities, the N1 route has been rebuilt to freeway standards. The original routes usually carry the designation of R101 and are often alternative routes to the newer, sometimes tolled, highways. Two examples are the R101 over Du Toitskloof Pass, where the new N1 highway bypasses the pass altogether by use of the Huguenot Tunnel, and the R101 through Polokwane Central, where the new N1 highway bypasses the town centre by use of the Polokwane Eastern Bypass.

There are exceptions to the usual R101 alternative route designation:

The list below only includes mainline toll plazas; e-Toll between Johannesburg and Pretoria, and ramp toll plazas have not been included.