NBA Coach of the Year Award

The National Basketball Association's Coach of the Year is an annual National Basketball Association (NBA) award given since the 1962–63 NBA season. The winner receives the Red Auerbach Trophy, which is named in honor of the head coach who led the Boston Celtics to nine NBA championships from 1956 to 1966. The winner is selected at the end of the regular season by a panel of sportswriters from the United States and Canada, each of whom casts a vote for first, second and third place selections. Each first-place vote is worth five points; each second-place vote is worth three points; and each third-place vote is worth one point. The person with the highest point total, regardless of the number of first-place votes, wins the award.

Since its inception, the award has been given to 40 different coaches. The most recent award winner is current Toronto Raptors head coach Nick Nurse, who is also the first coach to receive this honor in both the NBA and the NBA G League, having received the G League award in 2011. Gregg Popovich, Don Nelson and Pat Riley have each won the award three times, while Hubie Brown, Mike Budenholzer, Mike D'Antoni, Bill Fitch, Cotton Fitzsimmons, and Gene Shue have each won it twice. No coach has won consecutive Coach of the Year awards. Riley is the only coach to be named Coach of the Year with three franchises. Larry Bird is the only recipient to have also been named MVP as a player. Tom Heinsohn, Bill Sharman, and Lenny Wilkens are the only recipients to have been inducted to the Naismith Memorial Basketball Hall of Fame as both player and coach. Johnny Kerr is the only person to win the award with a losing record (33–48 with the Chicago Bulls in 1966–67). Kerr was honored because he had guided the Bulls to the NBA Playoffs in their first season in the league. Doc Rivers is the only person to win the award despite his team not making the playoffs (41–41 with the Orlando Magic in 1999–2000). Only five recipients also coached the team that won the championship the same season: Red Auerbach, Red Holzman, Bill Sharman, Phil Jackson, and Gregg Popovich. Popovich is the only NBA Coach of the Year recipient to win the championship in the same season twice, winning the NBA title with the San Antonio Spurs in 2003 and 2014.

2015–16 recipient Steve Kerr only coached 39 of the 82 games in the season due to complications from offseason back surgery, though he received credit for all of the Golden State Warriors' 73 wins that season. Assistant coach Luke Walton served as interim head coach for the other 43 games for the Warriors, receiving one second-place vote and two third-place votes. 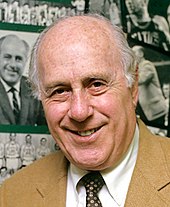 Hall of Famer Red Auerbach won the award in the 1964–65 season. The award was later named after him. 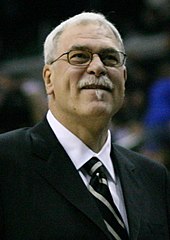 Hall of Famer Phil Jackson won the award in the 1995–96 season, coaching the Chicago Bulls to 72 wins in a season. 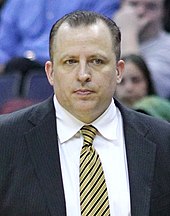 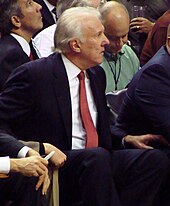 Gregg Popovich led the 2013–14 San Antonio Spurs to their 5th NBA championship, and earned his 3rd NBA Coach of the Year Award that same season.

Retrieved from "https://en.wikipedia.org/w/index.php?title=NBA_Coach_of_the_Year_Award&oldid=997396450"
Uses material from the Wikipedia article NBA Coach of the Year Award, released under the CC BY-SA 3.0 license.