NBC Studios are located in the historic 30 Rockefeller Plaza (on Sixth Avenue between 49th and 50th streets) in the borough of Manhattan, New York City. The building houses the NBC television network headquarters, its parent NBCUniversal, and NBC's flagship station WNBC (Channel 4), as well as cable news channel MSNBC.

The first NBC Radio City Studios began operating in the early 1930s. Tours of the studios began in 1933, suspended in 2014 and resumed on October 26, 2015. Because of the preponderance of radio studios, that section of the Rockefeller Center complex became known as Radio City (and gave its name to Radio City Music Hall). 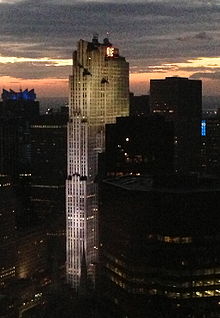 30 Rockefeller Plaza as seen from the Citigroup Center at dusk.

30 Rockefeller Plaza is the world headquarters of NBC.

Marquee from the side

Among the shows originating at 30 Rockefeller Plaza (shows taping as of the 2020–2021 season in bold):

Some other New York originated programs are/were produced elsewhere in the area, including: