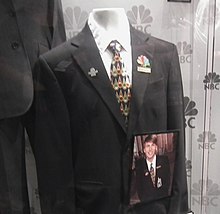 The distinctive NBC page uniform, with a photo of Jack McBrayer, who portrayed NBC page Kenneth Parcell on 30 Rock

The NBC Page Program is a 12-month paid fellowship at the NBCUniversal's studios in New York City and Universal City, California. Over the course of one year, pages gain exposure to various areas of the NBCUniversal portfolio. Pages contribute to various teams while on business, consumer and content assignments. East Coast pages also give tours and work in audience services at NBC Studios in New York City. Notable people who began their careers as NBC pages include Regis Philbin, Michael Eisner, Ted Koppel, and Aubrey Plaza. 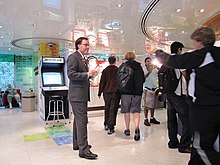 NBC Page giving a tour in 2009 at Rockefeller Center.

The Page Program is the longest-running franchise under NBC. NBC began the page program in 1933 at its Rockefeller Center headquarters, later expanding it to the West Coast studios in Universal City. In the 1950s, NBC also offered page positions at their owned-and-operated stations, such as WRC in Washington, D.C. where future Today Show personality Willard Scott was an NBC page.

Selection is highly competitive, with only 212 pages selected a year out of more than 16,000 applicants. With around 1.5 percent of applicants accepted to the program, becoming an NBC page is more competitive than gaining admission to Ivy League universities. Past pages describe the interview process as grueling, as the company seeks the best corporate image to present to the public.

Pages regularly get to work on such programs as The Tonight Show and Saturday Night Live. Pages also rotate through assignments in public relations (PR), marketing, development, TV music services, and production in a variety of shows and special projects. Many pages go on to careers with NBC or other broadcast media and a number have become celebrities or leaders of the industry in their own right.

In the NBC sitcom 30 Rock, produced by former Saturday Night Live head writer Tina Fey, Jack McBrayer portrays a zealous, smiling, do-good NBC page named Kenneth Parcell, who appears as a page through the show's seven seasons despite pages usually only being employed for a year. And while pages are usually in their 20s, it is a running joke on the show that Kenneth is unrealistically old (indeed, that he is immortal) based on his looks. (For example, in Season 5's "When it Rains, it Pours", Kenneth is seen nostalgically packing away a signed photograph of Fred Allen from 1947, dedicated: "Kenneth, you're the TOPS!" into a box marked "NBC Memories 1945-1967".) 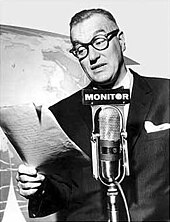