Not to be confused with Classic NES Series. 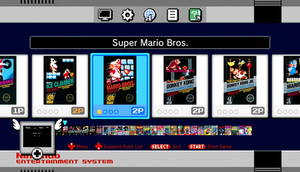 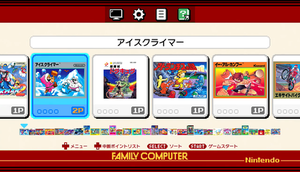 Nintendo produced and sold about 2.3 million NES Classic Editions from November 2016 through April 2017, with shipments selling out nearly immediately. In April 2017, Nintendo announced they were discontinuing the product, leading to consumer confusion, and incidents of greatly increased pricing among private sellers. Due to the demand of the NES Classic, and the success of the Super NES Classic Edition console, Nintendo re-introduced the NES Classic on June 29, 2018. Production was discontinued again in December 2018.

The NES Classic Edition is a dedicated console for emulating 30 Nintendo Entertainment System games. The console is distributed in two variations; one for Japan, featuring the likeness of the original Famicom, and one for the rest of the world, which looks like the original NES. For the non-Japanese variation, all of the games are based on their US release, running at 60 Hz and using the names by which they were released in the United States. The console's user interface supports up to eight languages, but this does not affect the language for the games themselves.

For video output, the system features an HDMI connection, which puts out 720p at 60 Hz video for all games.

The controllers in the international version of the console feature the Wii Nunchuk's connector, which allows the controller to be connected to the Wii Remote for use with Virtual Console games on the Wii and Wii U. Accessories for the Wii such as the Classic Controller may be used with the NES Classic. The controllers for the Japanese version are hardwired into the console just like in the original Famicom, so they cannot be used in conjunction with the Wii. The Famicom Mini controllers are also proportioned to the size of the console, resulting in them being smaller than their North American or European counterpart. They fit into small holding slots on the side of the console. The Famicom Mini comes with two controllers. The microphone on the Player 2 controller is superficial only and does not work.

The console uses the Linux operating system, running a new Nintendo Entertainment System emulation engine developed by Nintendo European Research & Development (NERD). The emulation included limited support for some of the memory management controllers, aka mappers, used in NES cartridges to extend the ability of the console, such as for Super Mario Bros. 3, though not all known mappers were included with the emulation engine. The emulation engine was well-received by critics and was regarded as superior in both visual and audio support when compared to the NES Virtual Console emulation on the Wii U.

A 320-page book called Playing with Power: Nintendo NES Classics, published by Prima Games, was released the same day as the console; the book is a guide to some of the games included on the system. Nintendo of America brought back the Nintendo Power Line as an automated phone hotline from November 11 to 13 as a celebration of the launch of the system.

Regardless of the model or region, the microconsole included 30 built-in games in all regions. Games that originally had different titles in the PAL regions use their respective American monikers, such as Ninja Gaiden (originally Shadow Warriors) and Super C (originally Probotector II: Return of the Evil Forces). From the 30 included titles, 22 are common between all regions, while the eight remaining ones are exclusive to either Japan or North America/PAL region respectively.

The NES Classic Edition was first released on November 10, 2016 in Japan and Australia, and November 11 in North America and Europe. With the limited supply, these initial shipments sold out almost immediately.

Nintendo produced about 2.3 million NES Classic Editions over the next five months. By April 13, 2017, Nintendo announced it was ceasing production of the unit, with final shipments sent out within the next few days.

Upon its re-release in June 2018, the NES Classic Mini sold more units than the PS4, Xbox One, and the Nintendo Switch.

On December 13, 2018, Reggie Fils-Aimé affirmed that both the NES and SNES Classic Editions will not be restocked after the 2018 holiday season, nor does Nintendo anticipate producing any similar mini-console version of its other home consoles in the future.

Aside from criticism regarding the controller cord being too short as well as minor emulation glitches, especially with sound, the NES Classic Edition has been well received.

One of many "plug-n-play" consoles on the market, the demand for NES Classic Edition was notably large, with various retailers collectively selling approximately 196,000 units in its first month, remarkably selling out within hours of availability. Nintendo reported 1.5 million units had been sold by the end of 2016. On April 28, 2017, Nintendo revealed that 2.3 million consoles were sold in total. Following the rerelease of the console, Nintendo had sold about 1.3 million additional units through June 30, 2018.

Despite the positive reception, journalists were confused about Nintendo's decision to discontinue the unit as announced in April 2017. Nintendo did not say at launch that the system was meant to be only a limited run, and its messaging for it seemed to suggest it would be a product with a longer production life. The company clarified, when announcing the discontinuation, that "NES Classic Edition wasn’t intended to be an ongoing, long-term product. However, due to high demand, we did add extra shipments to our original plans." The lack of availability of the unit since launch, with shipments immediately selling out when they reach stores, also suggested Nintendo was not prepared for the demand for the product. Nintendo of America's CEO Reggie Fils-Aimé later stated that "We just didn't anticipate how incredible the response would be", having considered the sales of other similar retro-consoles, but they had to discontinue the unit as "we've got a lot going on right now and we don’t have unlimited resources."

According to an April 2017 report by Eurogamer, the discontinuation of the NES Classic was in part to transition the production line to a Super Nintendo Entertainment System (SNES) Classic system designed similarly to the NES Classic but featuring games from the SNES, to be launched in late 2017, though Nintendo did not confirm this information. While journalists agreed an SNES Classic would be a more enticing product and Nintendo would likely be more prepared to produce a larger number of systems, Nintendo's decision with the NES Classic may have influenced consumers to be wary of trying to buy a system produced in low volumes, or give the impression of artificial scarcity with the product as part of a longer-term strategy to keep consumers demanding Nintendo products. When the Super NES Classic Edition was officially announced in June 2017, Nintendo said it "will produce significantly more units of Super NES Classic Edition than we did of NES Classic Edition" to avoid a similar shortage issue, but reaffirmed that it was not anticipated to be an ongoing product. In December 2018, Fils-Aimé affirmed that both the NES and SNES Classic Editions will not be restocked after the holiday season, nor does Nintendo anticipate producing any similar mini-console version of its other home consoles in the future.

Shortly after the NES Classic Edition's release, hackers discovered ways to unofficially add up to 700 titles to the system's library, as well as enable emulation support for other consoles. Games from various consoles, such as the Nintendo 64 and 32X, have been successfully made to run on the NES Classic Edition.

The NES Classic Edition's very limited stock during its original release in 2016 was one of its main criticisms, with some stores receiving fewer than 10 units at a time. This, coupled with the extremely high demand, prompted internet scalpers to buy as many as they could, so they could resell them with extreme price markups. In the US, prices were commonly set between $200 and $500, compared to its launch price of $59.99. The separate controller that could be bought without the console suffered the same fate, often being included with the main unit. The limited supply of NES Classic was compared to the situation around Amiibo shortages, which similarly were offered by Nintendo in limited quantity and led to scalping and high resale prices, frustrating fans.

When Nintendo announced it was discontinuing the NES Classic Edition in April 2017, Nintendo enthusiasts and some outlets such as Polygon and The Verge believed that Nintendo planned on a limited release of the NES classic to drive artificial scarcity and increase sales, but which got out of hand with scalpers and secondary sales which have backfired on them. Nintendo denied these claims, stating that it was limited by its own rate of production with other hardware products, and that "It's definitely not intentional in terms of shorting the market".

Following the April 2017 discontinuation, consumers found that several bootleg versions of the NES Classic Edition appeared on third party auction sites, typically produced by Chinese companies. These bootlegs have been found to be near-identical in hardware and software, which could confuse consumers who were looking to purchase a Classic Edition.

A limited Shōnen Jump Edition of the Famicom Mini was released only in Japan on July 7, 2018. Colored gold to celebrate the 50th anniversary of Shueisha's Weekly Shōnen Jump manga magazine, the special edition features 20 Famicom games largely based on Shōnen Jump manga properties, including Dragon Ball, Saint Seiya, and Kinnikuman.

This edition of the console includes the following games:

Within two days, over 110,000 units of the Shōnen Jump unit had been sold.