The Naismith Memorial Basketball Hall of Fame is an American history museum and hall of fame, located at 1000 Hall of Fame Avenue in Springfield, Massachusetts. It serves as basketball's most complete library, in addition to promoting and preserving the history of basketball. Dedicated to Canadian-American physician and inventor of the sport James Naismith, who invented the sport in Springfield, the Hall of Fame was opened and inducted its first class in 1959.

History of the Springfield building

The Naismith Memorial Basketball Hall of Fame was established in 1959 without a physical location by Lee Williams, a former athletic director at Colby College. In the 1960s, the Basketball Hall of Fame struggled to raise enough money for the construction of its first facility. However, during the following half-decade the necessary amount was raised, and the building opened on Feb. 17, 1968, less than one month after the National Basketball Association played its 18th All-Star Game. The Basketball Hall of Fame's Board named four inductees in its first year. In addition to honoring those who contributed to basketball, the Hall of Fame sought to make contributions of its own. In 1979, the Hall of Fame sponsored the Tip-Off Classic, a pre-season college basketball exhibition. This Tip-Off Classic has been the start to the college basketball season ever since, and although it does not always take place in Springfield, Massachusetts, generally it returns every few years.

In the 17 years that the original Basketball Hall of Fame operated at Springfield College, it drew more than 630,000 visitors. The popularity of the Basketball Hall of Fame necessitated that a new facility be constructed, and in 1985, an $11 million facility was built beside the scenic Connecticut River in Springfield. As the new hall opened, it also recognized women for the first time, with inductees such as Senda Berenson Abbott, who first introduced basketball to women at Smith College. During the years following its construction, the Basketball Hall of Fame's second facility drew far more visitors than ever anticipated, due in large part to the increasing popularity of the game but also to the scenic location beside the river and the second Hall's interesting modern architecture.

In 2002, the Basketball Hall of Fame moved again—albeit merely 100 yards south along Springfield's riverfront—into a $47 million facility designed by renowned architects Gwathmey Siegel & Associates. The building's architecture features a metallic silver, basketball-shaped sphere flanked by two similarly symmetrical rhombuses. The dome is illuminated at night and features 80,000 square foot (7,400 m²), including a Subway sandwich shop, and an extensive gift shop. The second Basketball Hall of Fame was not torn down; rather it was converted into an LA Fitness health club. The current Basketball Hall of Fame features Center Court, a full-sized basketball court on which visitors can play. Inside the building there are a game gallery, many interactive exhibits, several theaters, and an honor ring of inductees. A large theater for ceremonies seats up to 300. The honorees inducted in 2002 included the Harlem Globetrotters and Magic Johnson, a five-time NBA champion, three-time NBA finals MVP and Olympic gold medalist.

As of 2011, the current Basketball Hall of Fame has greatly exceeded attendance expectations, with basketball fans traveling to the Hall of Fame from all over the world. Despite the new facility's success, a logistical problem remains for the Basketball Hall of Fame and the City of Springfield. The two entities (including the entire riverfront area) are wholly separated by the Interstate 91 elevated highway—one of the eastern United States' busiest highways—which, essentially, inhibits foot-traffic and other interaction between the Basketball Hall of Fame and Springfield's increasingly lively Metro Center. Both the Hall and Springfield have made public statements about cooperating further so as to facilitate even more business and recreational growth for both; however the placement and height of Interstate 91 remains a physical obstacle. Urban planners at universities such as UMass Amherst have called for the I-91 to be moved, or to be re-configured so as to be pedestrian-friendly to Hall of Fame visitors. In 2015 however, the first major construction project on I-91 in 45 years began with no major alterations made to its location, although an additional exit was constructed to provide better access to downtown and the new MGM Springfield complex and provide easier access to the riverfront and Hall of Fame. In 2010, the Urban Land Institute announced a plan to make the walk between Springfield's Metro Center and the Hall of Fame (and riverfront) easier. This project was completed soon after the renovation of I-91 in the summer of 2019. 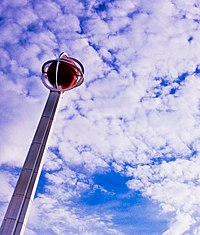 A basketball sculpture soars into the sky above the Basketball Hall of Fame in Springfield, Massachusetts.

In contrast to the Soccer and the National Baseball Halls of Fame, Springfield honors international and American professionals, as well as American and international amateurs, making it arguably the most comprehensive Hall of Fame among major American sports. From 2011 to 2015 seven committees were, and as of 2016 six committees are employed to both screen and elect candidates. Four of the committees screen prospective candidates:

Since 2011, the Veterans and International Committees also vote to directly induct one candidate for each induction class.

Three committees were formed in 2011 to directly elect one candidate for each induction class:

To be considered for induction by a screening committee, a player, retired coach, or referee must be fully retired from that role for at least three full seasons. The waiting period had originally been five years, but was changed to four years in December 2015, and to three seasons in December 2017. Prior to the induction class of 2018, referees had been eligible for induction after 25 years of full-time service, even if still active. Changes to the criteria for consideration of active coaches were also announced as part of the 2017 changes. Currently, coaches become eligible upon 25 years of full-time service at the high school level or above, or three seasons after retirement. Effective with the class of 2020, active coaches must meet the years of service requirement and be at least 60 years old. No years of service criterion is required for those who have made a "significant contribution to the game of basketball". Sportswriters and commentators are elected as full-fledged members, in contrast to the Baseball Hall of Fame that places them in separate wings from the "real" Hall of Fame.

Controversy has arisen over aspects of the Hall's voting procedures, including voter anonymity. While sportswriter voters of other major sports' Halls of Fame openly debate their choices, the Naismith Hall process is not transparent. The Hall has also been criticized for a tendency to enshrine active collegiate coaches and relatively obscure players while omitting some accomplished players and coaches. The Hall has received backlash for excluding such players and coaches, like coach Eddie Sutton, who was the head coach for the Oklahoma State University men's basketball. Sutton is one of only eight people to win 800 or more games as an NCAA Division 1 men's basketball head coach, but has yet to be inducted into the Hall of Fame. Sutton is set to be inducted with the 2020 class, but three other coaches that have a similar track record to his and are still coaching have already been inducted into the Hall of Fame.

The Basketball Hall of Fame is very independent of its baseball and football counterparts, specifically for its induction and voting process. There are multiple different voting committees for the Basketball Hall: The International Committee, North American Committee, Women’s Committee, Contributor Direct Election Committee, Early African-American Pioneers Committee, and Veterans Committee. Each committee makes their own individual selections for their inductees into the Hall. The members of these committees serve 3-year terms. How these members get selected, and who they are, is virtually unknown to the public and is kept completely anonymous. Inductees do not know who inducted them, and those who inducted them supposedly never let them know. This is a major reason why the Basketball Hall receives so much backlash because other Halls’ selection committees consist of sportswriters who openly debate and acknowledge their selections for induction.

Main article: List of members of the Naismith Memorial Basketball Hall of Fame

The entrance to the former site of the Basketball Hall of Fame near Metro Center Springfield.

In conjunction with the Final Four of each year's NCAA Division I men's and women's basketball tournaments, the Naismith Hall gives out several awards to college basketball athletes:

For men, the Hall presents awards to the top players in Division I at each of the five standard basketball positions.

Each of the award winners is chosen by a Hall of Fame selection committee, plus the award's namesake.

The Hall, in cooperation with the Women's Basketball Coaches Association, presents analogous awards for the top Division I women's players at each position. One has been awarded since 2000; the others were first presented in 2018.

As with the men's awards, the selection committee for the women's awards includes each award's namesake.

The Hall also formerly presented the Frances Pomeroy Naismith Award to two college seniors—one male player no taller than 72 inches (1.83 m), and one female player no taller than 68 inches (1.73 m)—determined to have been the nation's best student-athletes. The men's award, given since 1969, was voted on by the National Association of Basketball Coaches (NABC), and the women's, given since 1984, by members of the Women's Basketball Coaches Association. Both awards were discontinued after the 2012–13 season.