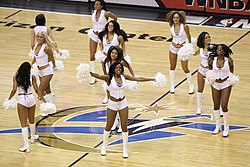 The National Basketball Association (NBA) is a professional basketball league with teams in the United States and Canada. Nearly every team, with one exception, has a squad of dancers for cheerleading that are usually involved in dancing, charity work, fundraisers, and modeling.

The only team currently without traditional NBA dancers is the San Antonio Spurs. Until 2018, they had a dance squad called the Silver Dancers respectively.