The National Federation of State High School Associations (NFHS) is the body that writes the rules of competition for most high school sports and activities in the United States. NFHS's headquarters are located in White River State Park in Indianapolis, Indiana.

The case in Mississippi is slightly different; the body governing public schools is a full member, while the body governing private schools is not an NFHS member at any level. In the state of Alabama, the public schools and a handful of private schools compete in the AHSAA (Alabama High School Athletic Association) which is a full member of the NFHS. The majority of private schools in the state are members of the AISA (Alabama Independent School Association) a non-member that uses NFHS rules. The AHSAA will not allow its members to play AISA schools but the AISA schools do compete with public and private schools outside of Alabama. 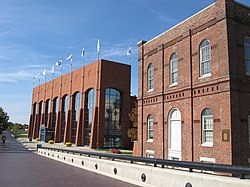 NFHS Headquarters, with the NCAA Hall of Champions in the background

The provincial associations of Canada are affiliate members of the NFHS.

The NFHS publishes rules books for each sport or activity, and most states adopt those rules wholly for state high school competition including the non member private school associations.

The NFHS offered an online Coach Education Program in January 2007. It released a course, Fundamentals of Coaching. The NFHS has announced that it will offer a National Coach Certification in September 2009. This will enable to coaches to become a Level 1 - Accredited Interscholastic Coach issued by the NFHS.

The National High School Hall of Fame is a program of the National Federation of State High School Associations that honors individuals who have made outstanding contributions to high school sports or performing arts. Since 1986, the Hall of Fame enshrinement ceremony has been the final event of the National Federation's annual summer meeting, which is held in late June and early July and attended by board members and executives of the state high school associations.