American symphony orchestra based in Washington, DC
This article is about the orchestra of the United States. For orchestras of other countries, see National Symphony Orchestra (disambiguation).

The National Symphony Orchestra (NSO), founded in 1930, is the United States national orchestra based in Washington, D.C.. Its principal performing venue is the John F. Kennedy Center for the Performing Arts. It also performs for the annual National Memorial Day Concert and A Capitol Fourth celebrations.

For the first period of its history, the NSO performed in Constitution Hall. During the tenure of the first music director, Hans Kindler, the musicians received a salary of $40.00 per week, for three rehearsals and one concert, for five months of the year. The first female member of the NSO was a harpist, Sylvia Meyer, who joined in 1933.

Kindler and the NSO made several 78-rpm recordings for RCA Victor, including the two Roumanian Rhapsodies by George Enescu; much later, in 1960, the NSO would perform the first of these works under the baton of the visiting Romanian conductor George Georgescu, a close associate and favored exponent of the composer. One of the more unusual RCA recordings with the orchestra was of the complete ballet music from the opera King Henry VIII by Camille Saint-Saëns, one of the very few recordings conducted by Walter Damrosch. Years later, Howard Mitchell made a series of stereophonic recordings with the orchestra for RCA. Antal Doráti recorded with the orchestra for Decca Records. Mstislav Rostropovich made recordings for Teldec, Sony Records, and Erato. The orchestra returned to RCA Victor under Leonard Slatkin, until RCA abandoned new classical recordings.

In 1986, the NSO became the artistic affiliate of the Kennedy Center, where it has presented a concert season annually since the Center opened in 1971.

The NSO regularly participates in events of national and international importance, including performances for ceremonial state affairs, presidential inaugurations and official holiday celebrations, including the annual National Memorial Day Concert in May and A Capitol Fourth concerts on 4 July.

The NSO itself numbers 100 musicians, presenting a 52-week season of approximately 175 concerts each year. These include classical subscription series, pops concerts, and educational programs. In addition to these activities, small groups of NSO members develop education programs designed at age levels from pre-kindergarten through high school. Collectively, these ensembles present as many as 100 additional performances a year during the American Residencies and at the Kennedy Center.

Through the John and June Hechinger Commissioning Fund for New Orchestral Works, the NSO has commissioned more than 50 works, including cycles of fanfares and encores. During his tenure, Slatkin founded the National Conducting Institute in 2000.

Also of note is the National Symphony Orchestra Summer Music Institute. For more than a decade, scholarships provided by the National Trustees of the National Symphony Orchestra have enabled top-level students from across the country and from many nations to come to the nation's capital for several weeks of study with NSO musicians. These participants, selected from a competitive pool of applicants, come from a variety of backgrounds, some currently enrolled in music conservatories such as Juilliard and others still completing high school. 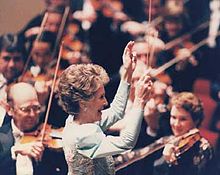 Another important project is the National Symphony Orchestra American Residencies for the John F. Kennedy Center for the Performing Arts. This venture encompasses sharing all elements of classical symphonic music with a specific region of the United States, exploring the diversity of musical influences, and giving the region a musical voice in the nation's center for the performing arts through exchanges, training programs, and commissions. Established in 1992, the project has taken the NSO to fifteen states.

On September 25, 2008, the orchestra announced the appointment of Christoph Eschenbach as the orchestra's sixth music director, effective with the 2010–2011 season, for an initial contract of four years. In September 2011, the orchestra extended Eschenbach's contract through the 2014–2015 season, and in March 2014, his contract was extended through the 2016–2017 season. Eschenbach concluded his tenure as NSO music director at the end of the 2016–2017 season, and subsequently became the NSO's conductor laureate.

In 2011, Gianandrea Noseda first guest-conducted the NSO, and returned in November 2015 for an additional guest engagement. In January 2016, the NSO announced the appointment Noseda as its next music director, effective with the 2017–2018 season. He is to serve as music director-designate in the 2016–2017 season, and his initial contract as music director is for 4 seasons. In September 2018, the NSO announced the extension of Noseda's contract through the 2024–2025 season.