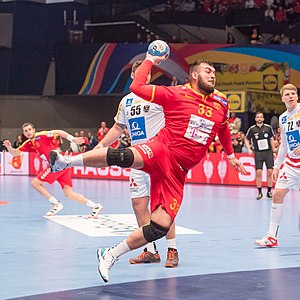 First Handball teams in Macedonia emerged in the second half of the 40s.Soon Macedonian Handball federation started to organize national championships in big handball −11 players on a soccer field size.By the 60s it was transformed in small handball or indoor handball.Macedonian champions were qualified for federal Yugoslav Championship instead of European cup competitions.Best Macedonian players played for the Federal team of Yugoslavia.In the time of the federation 6 of the constitutional republics were sending one federal team to compete at Olympics and World cup. Macedonia was participating within the federal team from 1950 till 1991 .After the split of the federation ,as a single republic from 1992 till 1994 Macedonia didn't manage to enter the qualifications for EC, WC and OG.From 1995 Macedonia participates as a single Republic to all qualifications and Championship tournaments. 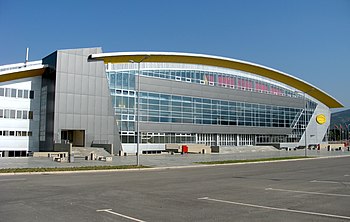 The BTSC – Boris Trajkovski Sports Center Macedonian: Спортски центар Борис Трајковски, Skopje is a multi-functional indoor sports arena. It is located in the Karpoš Municipality of Skopje, Macedonia. It is named after the former president, Boris Trajkovski. It's capacity is 10,000 .There is an Olympic size Swimming Pool and 5 Star Hotel Alexander Palace within the complex. Additional Water Land Fun Park and Ice Skating Rink next to it.

The arena is a home-ground of the Macedonian handball team (men and women). The venue also contains four restaurants and a sports bar. It was one of two venues for the 2008 European Women's Handball Championship.

During the period 1958 till 1991 Macedonia was within the Federation of SFRJ. It was represented internationally within the team Yugoslavia as part of the Federation of 6 Republics. Macedonia is not a successor of the results of team Yugoslavia it was just part of it.During that time was present at the 5 Olympics and 10 World cup tournaments within the successful team Yugoslavia. After the split Macedonian team started to compete representing the single independent Republic. At the 1992 Olympics Yugoslavia team was banned to participate.At the World cup 1993 only teams from the Olympics qualified so Macedonian team didn't had a chance to qualify . For the first European Championship 1994 team Macedonia didn't enter the qualifications.For the World cup 1995 only teams from EURO 1994 qualified so again team Macedonian didn't get a chance to participate. Since EURO 1996 team Macedonia is regular in the qualifications. It entered 6 European Championships first one in 1998 then 2012,2014,2016,2018 and 2020. Most successful was the 2012 when they've finished 5th.For the World Cup's they entered 7 times 1999,2009,2013,2015,2017,2019 and 2021.The most successful was in 2015 when they've finished 9th. For the Olympic tournament qualifications they've entered two times 2012 finishing 4th and 2016 finishing 3rd .They didn't manage to finish in the first two spots and haven't qualified.

Macedonia has a great support at their matches from their fans. There is always great number of fans following the national team on every World Cup or EURO championship they attend. Cheerful friendly fans create a great atmosphere on every game.

These are players that have also received a call.

Record against other teams