The authority met for the first time on 8 November 2018 at Morpeth Town Hall. Norma Redfearn, the elected mayor of North Tyneside Council, was appointed the chair until an interim mayor was appointed. At the combined authority cabinet meeting held on 4 December 2018, Norma Redfearn was confirmed as the interim mayor, and remained in post until the election of Labour's Jamie Driscoll as the authority's first directly elected mayor.

The authority was formed on 2 November 2018 and in May 2019, elections were held for a directly elected regional mayor who has taken control of certain powers and funding devolved from Westminster to the newly formed region. A fund of £600 million over 30 years, to be administered by the new mayor, was announced in the November 2017 budget.

The responsibilities and governance of the three constituent local authorities will remain unchanged.

The total population of the combined area is approximately 816,000 and it covers an area of 2,012 square miles (5,210 km2). Despite the name "North of Tyne," parts of the area are south of the River Tyne, including the towns of Hexham and Prudhoe.

On 27 April 2018, Northumberland, North Tyneside and Newcastle City Council voted to support the proposal. In November 2018 parliament approved the proposal and the first election for the combined authority took place on 2 May 2019 along with the other elections across the United Kingdom.

The 2020 Spring Budget from central goverenment reserves funding for "intra-city transport" between Tees Valley and Tyne and Wear, which has been interpreted by some as meaning the borders of the North of Tyne Combined Authority could be adjusted.

Formal membership of the North of Tyne Combined Authority consists of those serving on the following statutory committees:

The Cabinet of the Combined Authority met for the first time on 8 November 2018 at Morpeth Town Hall in Northumberland. The current membership of the Cabinet is as follows:

The membership of the Audit and Standards Committee is as follows: 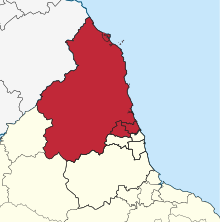 Map of the local government authorities of North East England, highlighting the area covered by the North of Tyne Combined Authority.

The Combined Authority consists of the following authorities (2019 population estimates):

Retrieved from "https://en.wikipedia.org/w/index.php?title=North_of_Tyne_Combined_Authority&oldid=1002749287"
Uses material from the Wikipedia article North of Tyne Combined Authority, released under the CC BY-SA 3.0 license.