This article is about the Northern Hemisphere of Earth. For astronomical observations of the sky, see Northern Celestial Hemisphere.
Half of Earth that is north of the equator

Northern Hemisphere shaded blue. The hemispheres appear to be unequal in this image due to Antarctica not being shown, but in reality are the same size. 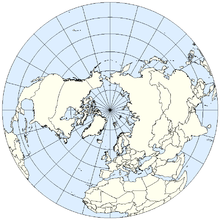 Northern Hemisphere from above the North Pole

The Northern Hemisphere is the top half of Earth that is north of the Equator. For other planets in the Solar System, north is defined as being in the same celestial hemisphere relative to the invariable plane of the solar system as Earth's North Pole.

Owing to the Earth's axial tilt of 23.439281°, winter in the Northern Hemisphere lasts from the December solstice (typically December 21 UTC) to the March equinox (typically March 20 UTC), while summer lasts from the June solstice through to the September equinox (typically on 23 September UTC). The dates vary each year due to the difference between the calendar year and the astronomical year. Within the northern hemisphere, oceanic currents can change the weather patterns that affect many factors within the north coast. Such events include ENSO (El Niño southern oscillation).

Trade winds blow from east to west just above the equator. The winds pull surface water with them, creating currents, which flow westward due to the Coriolis effect. The currents then bend to the right, heading north. At about 30 degrees north latitude, a different set of winds, the westerlies, push the currents back to the east, producing a closed clockwise loop.

Its surface is 60.7% water, compared with 80.9% water in the case of the Southern Hemisphere, and it contains 67.3% of Earth's land. Europe and North America are entirely on Earth's Northern Hemisphere.

The Arctic is a region around the North Pole (90° latitude). Its climate is characterized by cold winters and cool summers. Precipitation mostly comes in the form of snow. Areas inside the Arctic Circle (66°34′ latitude) experience some days in summer when the Sun never sets, and some days during the winter when it never rises. The duration of these phases varies from one day for locations right on the Arctic Circle to several months near the Pole, which is the middle of the Northern Hemisphere.

Between the Arctic Circle and the Tropic of Cancer (23°26′ latitude) lies the Northern temperate zone. The changes in these regions between summer and winter are generally mild, rather than extreme hot or cold. However, a temperate climate can have very unpredictable weather.

In the Northern Hemisphere, objects moving across or above the surface of the Earth tend to turn to the right because of the Coriolis effect. As a result, large-scale horizontal flows of air or water tend to form clockwise-turning gyres. These are best seen in ocean circulation patterns in the North Atlantic and North Pacific oceans. Within the northern hemisphere, oceanic currents can change the weather patterns that affect many factors within the north coast; such as El Niño.

For the same reason, flows of air down toward the northern surface of the Earth tend to spread across the surface in a clockwise pattern. Thus, clockwise air circulation is characteristic of high pressure weather cells in the Northern Hemisphere. Conversely, air rising from the northern surface of the Earth (creating a region of low pressure) tends to draw air toward it in a counter-clockwise pattern. Hurricanes and tropical storms (massive low-pressure systems) spin counter-clockwise in the Northern Hemisphere.

The shadow of a sundial moves clockwise on latitudes north of the subsolar point. During the day on these latitudes, the Sun tends to rise to its maximum at a southerly position. Between the Tropic of Cancer and the Equator, the sun can be seen to the north, directly overhead, or to the south at noon dependent on the time of year. In the Southern Hemisphere the midday Sun is predominantly at north.

The Northern Hemisphere is home to approximately 6.57 billion people which is around 90% of the earth's total human population of 7.3 billion people.