Any large system of circulating ocean currents
For other uses, see Gyre (disambiguation). 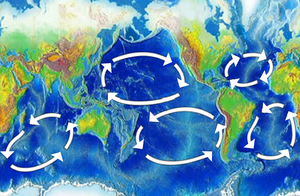 In oceanography, a gyre (/ˈdʒaɪər/) is any large system of circulating ocean currents, particularly those involved with large wind movements. Gyres are caused by the Coriolis effect; planetary vorticity, horizontal friction and vertical friction determine the circulatory patterns from the wind stress curl (torque).

Gyre can refer to any type of vortex in an atmosphere or a sea, even one that is man-made, but it is most commonly used in terrestrial oceanography to refer to the major ocean systems.

The following are the five most notable ocean gyres: 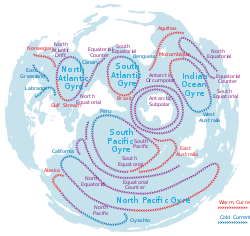 All of the world's larger gyres

Tropical gyres are less unified and tend to be mostly east-west with minor north-south extent.

This build-up of water in the center creates flow towards the equator in the upper 1,000 to 2,000 m (3,300 to 6,600 ft) of the ocean, through rather complex dynamics. This flow is returned towards the pole in an intensified western boundary current. The boundary current of the North Atlantic Gyre is the Gulf Stream, of the North Pacific Gyre the Kuroshio Current, of the South Atlantic Gyre the Brazil Current, of the South Pacific Gyre the East Australian Current, and of the Indian Ocean Gyre the Agulhas Current.

Subpolar gyres form at high latitudes (around 60°). Circulation of surface wind and ocean water is counterclockwise in the Northern Hemisphere, around a low-pressure area, such as the persistent Aleutian Low and the Icelandic Low. Surface currents generally move outward from the center of the system. This drives the Ekman transport, which creates an upwelling of nutrient-rich water from the lower depths.

Subpolar circulation in the southern hemisphere is dominated by the Antarctic Circumpolar Current, due to the lack of large landmasses breaking up the Southern Ocean. There are minor gyres in the Weddell Sea and the Ross Sea, the Weddell Gyre and Ross Gyre, which circulate in a clockwise direction.

Satellite observational sea surface height and sea surface temperature data suggest that the world eight major ocean gyres are moving towards poles in the past few decades. Such feature shows agreement with the climate model prediction under anthropogenic global warming. Paleo-climate reconstruction also suggest that during the past cold climate intervals some western boundary currents (western branches of the subtropical ocean gyres) are closer to the equator than their modern positions. These evidence implies that global warming is very likely to push the large-scale ocean gyres towards higher latitudes.

During 1992-2011, stronger winds, especially the subtropical trade winds in the Pacific ocean have provided a mechanism for vertical heat distribution. The effects are changes in the ocean currents, increasing the subtropical overturning, which are also related to the El Niño and La Niña phenomena. Depending on natural variability, during La Niña years around 30% more heat from the upper ocean layer is transported into the deeper ocean. Several studies in recent years, found a multidecadal increase in OHC of the deep and upper ocean regions and attribute the heat uptake to anthropogenic warming.

The influence of the Coriolis effect on westward intensification 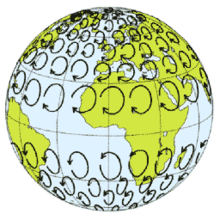 This section is an excerpt from Garbage patch[edit]

A garbage patch is a gyre of marine debris particles caused by the effects of ocean currents and increasing plastic pollution by human populations. These human-caused collections of plastic and other debris, cause ecosystem and environmental problems that effect marine life, contaminate oceans with toxic chemicals, and contribute to greenhouse gas emissions.

Garbage patches are rapidly growing because of widespread loss of plastic from human trash collection systems. It is estimated that approximately "100 million tons of plastic are generated [globally] each year", and about 10% of that plastic ends up in the oceans. The United Nations Environmental Program recently estimated that "for every square mile of ocean" there are about "46,000 pieces of plastic."