Highest volcano in the world 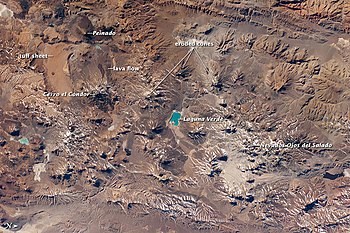 Nevado Ojos del Salado is an active stratovolcano in the Andes on the Argentina–Chile border and the highest active volcano in the world at 6,893 m (22,615 ft). It is also the second highest mountain in both the Western Hemisphere and the Southern Hemisphere behind Aconcagua at approximately 7,000 meters (23,000 ft) and it is the highest in Chile. Nevado Ojos del Salado could be translated as "Eyes of the Salty One", which describes it as being very snowy in the winter and salty with many lakes.

Due to its location near the Atacama Desert, the mountain has very dry conditions, with snow usually remaining on the peak only during winter, though heavy storms can cover the surrounding area with a few feet of snow even in summer. Despite the generally dry conditions, there is a permanent crater lake about 100 m (330 ft) in diameter at an elevation of 6,390 m (20,960 ft) on the eastern side of the mountain. This is most likely the highest lake of any kind in the world.

The ascent of Ojos del Salado is mostly a hike until the final section to the summit, which is a difficult scramble that may require ropes. The first ascent was made in 1937 by Jan Alfred Szczepański and Justyn Wojsznis, members of a Polish expedition in the Andes.

Its name, meaning roughly "Salt Springs" in Spanish, comes from the enormous deposits of salt that, in the form of lagoons or “eyes”, appear in its glaciers. An international highway between Chile and Argentina runs north of the mountain.

Ojos del Salado, along with several other high volcanoes such as El Muerto, El Solo, Nevado Incahuasi and Nevado Tres Cruces lies at the southern end of the Central Volcanic Zone of the Andes.

Volcanic activity in the region commenced 26 million years ago in the Cordillera Claudio Gay at the same time as the neighbouring Maricunga Belt volcanoes were active. Starting 18 million years ago, local subduction of the Nazca Plate beneath the South America Plate became increasingly shallower, and this caused volcanism to shift from the Maricunga Belt to the Ojos del Salado region.

The Paleozoic basement crops out only northwest of Nevado Tres Cruces. Other geologic units in the region are Oligocene sedimentary units and volcanic rocks ranging from Oligocene age to less than 1.5 million years old. The area is part of a tectonic boundary between a volcanically active region north of the boundary and a less volcanically active region south of the boundary, which is also characterized by geographical differences, e.g. the presence of transverse valleys.

There are glaciers on the mountain, in the crater and in the form of penitentes which reach heights of 8–5 metres (26–16 ft). Other reports indicate the absence of glaciers on Ojos del Salado. The melting of permafrost on the mountain nourishes several lakes, one of which, fed by a creek, lies at 6,500 metres (21,300 ft) altitude.

Ojos del Salado is an active volcano, but the question of whether it should be considered currently (or "historically") active is arguable. According to the Smithsonian Institution's Global Volcanism Program, the most recent known eruption was about 1,300 years ago, an estimate with large margin of uncertainty; there is, however, some evidence for a minor ash emission in 1993, which would definitely qualify the volcano as historically active. The presence of fumaroles high on the mountain and recent-looking lava flows, albeit of uncertain age, also argues in favor of a categorization as "active." By these definitions, Ojos del Salado is the highest historically active volcano on Earth. If the older date is accepted, the title of "highest historically active volcano" might reside instead with the somewhat lower Llullaillaco volcano, which erupted most recently in 1877 and is considered active.

Salado's rock is predominantly potassium-rich dacite and rhyodacite. Its lavas are high in biotite, hornblende, plagioclase, and opaques, with lower levels of augite, quartz, and hypersthene.

The elevation of Ojos del Salado has been the subject of debate. The mountain is hidden behind other peaks, and thus its height was not appreciated in early research until 1937 when the mountain was climbed by Polish climbers.

A 2006 article in Andes Magazine proposed that Ojos del Salado may be higher than Aconcagua, an argument premised on old altitude surveys of questionable accuracy which assigned Ojos del Salado an elevation of 7,057 m (23,153 ft), nearly 100 m (330 ft) higher than Aconcagua. A 1955 estimate set the elevation of Ojos del Salado at 7,100 m (23,300 ft), but that was "simply [...] based on the altitude of the final camp, and the hours of ascent to the summit." In 1956 the first Chilean expedition, led by the retired lieutenant René Gajardo, using a pocket pressure altimeter, measured the height of Ojos del Salado as 7,084 m (23,241 ft). Compounding the inexact quality of this method is the fact that the measurement was taken when the team reached the summit in the afternoon, when air pressure generally decreases, which resulted in a reading far too high.

An expedition to the area in the 1990s claimed that nearby Monte Pissis was even higher than Ojos del Salado. Later measurements using more precise equipment showed that Ojos del Salado is about 100 m (330 ft) higher than Pissis; furthermore, a 2007 Chilean–Argentine–European expedition organized by Andes Magazine and Azimut 360, using even more accurate instruments and performing surveys on both Ojos del Salado and Monte Pissis, found the former to be 6,891 m (22,608 ft) and the latter 6,793 m (22,287 ft) Although this fits within recent handheld GPS surveys which have estimated the mountain to be between 6,880 m (22,570 ft) and 6,910 m (22,670 ft), the vertical error margin of the expedition's equipment 10 m (33 ft), leaves the mountain's precise altitude uncertain.

Ojos del Salado has been a popular mountain for attempts to attain the highest altitude aboard a land vehicle.

The previous long-standing record altitude for a four-wheeled vehicle was set on April 21, 2007 by the Chilean duo of Gonzalo Bravo G. and Eduardo Canales Moya. Reaching an altitude of 6,688 meters (21,942 ft.) with a modified Suzuki Samurai, the duo beat the previous record of 6,646 m which had been set on March 13, 2007 by German Matthias Jeschke in a Jeep Wrangler Unlimited Rubicon.

Jeschke set the high altitude record for trucks reaching a height of 6,675 meters (21,899 ft) with a Mercedes-Benz Zetros truck on March 6, 2015. This is also a world record for a diesel-powered engine.

On November 6, 2017, Matthias Jeschke, again, attempted to gain two world records, one for construction at altitude and the other by beating the then current 6,688 m record. A refuge hut was built at 6,100 m (a record), but on December 19 it was announced the altitude record attempt had been called off at a height of 6,150 m for a combination of factors including an insurmountable rock barrier and adverse weather conditions.

On December 13, 2019, a 10-person team led once again by Matthias Jeschke finally succeeded in breaking long-standing record. They reached an altitude of 6,694 m (21,962 ft) in a modified Mercedes-Benz Unimog U 5023. It was part of an expedition to set up an emergency radio system on top of the volcano.