Oor Wullie (English: Our Willie) is a Scottish comic strip published in the D.C. Thomson newspaper The Sunday Post. It features a character called Wullie; Wullie is the familiar Scots nickname for boys named William. His trademarks are spiky hair, dungarees and an upturned bucket, which he uses as a seat - most strips since early 1937 begin and end with a single panel of Wullie sitting on his bucket. The earliest strips, with little dialogue, ended with Wullie complaining ("I nivver get ony fun roond here!"). The artistic style settled down by 1940 and has changed little since. A frequent tagline reads, "Oor Wullie! Your Wullie! A'body's Wullie!" (Our Willie! Your Willie! Everybody's Willie!).

Created by Thomson editor R. D. Low and drawn by cartoonist Dudley D. Watkins, the strip first appeared on 8 March 1936. Watkins continued to draw Oor Wullie until his death in 1969, after which the Post recycled his work into the 1970s. New strips were eventually commissioned from Tom Lavery, followed by Peter Davidson and Robert Nixon. Ken H. Harrison drew the strip from 1989 until 1997, when Davidson resumed duties. Between January 2005 and 2006 storylines were written by broadcaster Tom Morton from his home in Shetland, and subsequently they were written by Dave Donaldson, managing director of Thomson's comics division. The current writer is former Dandy editor Morris Heggie. 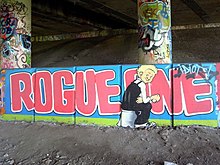 Although Wullie's hometown was unnamed in the original Watkins strips, it has been called Auchenshoogle since the late 1990s.

Wullie and his friends roam the streets of his town, though he is sometimes depicted at school which he finds confining. Praise from his teacher, who addresses him as "William", is rare and acutely embarrassing. His adventures often consist of unrealistic get-rich-quick schemes that lead to mischief, to the despair of his parents Ma and Pa (Wullie's Pa is called “Tam”, the only reference to this is in a strip from the sixties during a conversation between Pa and PC Murdoch) and local policeman (and Wullie's arch-nemesis) P.C. Murdoch. Wullie's gang consists of himself, Fat Boab (Eng: Fat Bob), Wee Eck (Eng: Little Alex), 'Soapy' Soutar (/ˈsoʊtər/) and Primrose Paterson (an annoying girl who likes Wullie, but who Wullie often does not want to be in the gang, yet manages to be much better than him in various games and activities such as football, racing, climbing trees and firing a catapult). Wullie is the self-proclaimed leader, a position which is frequently disputed by the others. In early strips the gang met in a wooden shed - usually located in the garden at Wullie's house. In later strips the gang meets in a derelict caravan called Holly Rude. He used to have another friend called Ezzy, who has stopped appearing in the strips, along with Wullie's unnamed little brother. He owns a pet mouse named Jeemy and in later strips a pet dog called Harry. In the Ken Harrison strips he gained additional supporting characters, such as the pretty Doris Gow (whom Wullie likes, much to Primrose's rage), her boyfriend, the town bully Basher McKenzie, and grumpy old neighbour Moaning Mildew (modelled on Victor Meldrew from One Foot in the Grave).

William Ross, Secretary of State for Scotland 1964–70 and 1974–76, was occasionally depicted in political cartoons seated on a bucket as Oor Wullie.

When The Topper launched in 1953, Oor Wullie appeared in the masthead, although not as a story in the comic. He often appeared sitting on his bucket, though other poses were used as well. The pose on Topper no. 1 had him wearing a top hat. He had the top hat in one hand and the other hand pointing at the Topper logo. Early annuals were undated, so this information is to help identify them. Later annuals had the copyright date inside them.

Starting in 1940 the Oor Wullie strips also appeared in the form of a Christmas annual which alternated every second year with “The Broons”, another D. C. Thomson product. (No annuals were published between 1943 and 1946.) Pre-1966 annuals were undated. Starting in 2015, both titles are now published together annually.

A facsimile of the first The Broons annual was released on 25 November 2006 and of the first Oor Wullie annual the following year, celebrating the 70th anniversary of the strip.

Since 1996 - the 60th anniversary of the strip - D.C. Thomson has also published a series of compilation books featuring The Broons and Oor Wullie on alternate pages.

The early stories are often recycled in current annuals. An example being the “twin cousin” story in the 2018 annual being first seen in the fifties.

In celebration of Oor Wullie's 80th anniversary in 2016, he was the subject of a major public art project when 55 decorated 5 ft sculptures of him were placed around Dundee and its environs with another 13 touring round Scotland over an 8-week period. Additionally 29 smaller versions of the sculptures were designed by school children in Dundee as part of an education programme connected with the trail. There were also two smaller community sculptures. As of 2017, the Bucket Trail was the largest mass public art project to have taken place in Scotland. The project ran from 27 June for two months, with the sculptures being auctioned in September for £883,000. The proceeds went to the Archie Foundation's appeal to raise money for a new pediatric surgical suite at Tayside Children's Hospital. The event attracted large numbers of visitors to Dundee, while the city's inhabitants showed enthusasism towards the project. Prior to the auction, a farewell event held in Dundee's Slessor Gardens from 9–11 September saw 95 Oor Wullie statues on public display and sold over 12,000 tickets. Ultimately about 20,000 people attended the event. Each statue has its own unique design, for instance one entitled Oor Bowie was inspired by David Bowie, while a spaceman-themed statue was inspired by Tim Peake A number of well known artists contributed designs, including John Lowrie Morrison (Jolomo), whose figure “Oor Jolomo” included a number of his classic depictions of “red roofed cottages” on his dungarees.

In 2019 Oor Wullie's BIG Bucket Trail 2019 was officially launched with 200 artistic interpretations of the figure at locations in cities across Scotland (for example, a statue wearing Willie Miller's football kit was installed in Aberdeen) until 30 August, helping to raising money for Edinburgh Children's Hospital, Glasgow Children's Hospital and the Archie Foundation.