In chemistry, orbital hybridisation (or hybridization) is the concept of mixing atomic orbitals into new hybrid orbitals (with different energies, shapes, etc., than the component atomic orbitals) suitable for the pairing of electrons to form chemical bonds in valence bond theory. For example, in a carbon atom which forms four single bonds the valence-shell s orbital combines with three valence-shell p orbitals to form four equivalent sp3 mixtures which are arranged in a tetrahedral arrangement around the carbon to bond to four different atoms. Hybrid orbitals are useful in the explanation of molecular geometry and atomic bonding properties and are symmetrically disposed in space. Usually hybrid orbitals are formed by mixing atomic orbitals of comparable energies.

Chemist Linus Pauling first developed the hybridisation theory in 1931 to explain the structure of simple molecules such as methane (CH4) using atomic orbitals. Pauling pointed out that a carbon atom forms four bonds by using one s and three p orbitals, so that "it might be inferred" that a carbon atom would form three bonds at right angles (using p orbitals) and a fourth weaker bond using the s orbital in some arbitrary direction. In reality, methane has four C-H bonds of equivalent strength. The angle between any two bonds is the tetrahedral bond angle of 109°28' (approx. 109.5°). Pauling supposed that in the presence of four hydrogen atoms, the s and p orbitals form four equivalent combinations which he called hybrid orbitals. Each hybrid is denoted sp3 to indicate its composition, and is directed along one of the four C-H bonds. This concept was developed for such simple chemical systems, but the approach was later applied more widely, and today it is considered an effective heuristic for rationalizing the structures of organic compounds. It gives a simple orbital picture equivalent to Lewis structures.

Hybridisation theory is an integral part of organic chemistry, one of the most compelling examples being Baldwin's rules. For drawing reaction mechanisms sometimes a classical bonding picture is needed with two atoms sharing two electrons. Hybridisation theory explains bonding in alkenes and methane. The amount of p character or s character, which is decided mainly by orbital hybridisation, can be used to reliably predict molecular properties such as acidity or basicity.

Orbitals are a model representation of the behavior of electrons within molecules. In the case of simple hybridization, this approximation is based on atomic orbitals, similar to those obtained for the hydrogen atom, the only neutral atom for which the Schrödinger equation can be solved exactly. In heavier atoms, such as carbon, nitrogen, and oxygen, the atomic orbitals used are the 2s and 2p orbitals, similar to excited state orbitals for hydrogen.

Hybrid orbitals are assumed to be mixtures of atomic orbitals, superimposed on each other in various proportions. For example, in methane, the C hybrid orbital which forms each carbon–hydrogen bond consists of 25% s character and 75% p character and is thus described as sp3 (read as s-p-three) hybridised. Quantum mechanics describes this hybrid as an sp3 wavefunction of the form N(s + √3pσ), where N is a normalisation constant (here 1/2) and pσ is a p orbital directed along the C-H axis to form a sigma bond. The ratio of coefficients (denoted λ in general) is √3 in this example. Since the electron density associated with an orbital is proportional to the square of the wavefunction, the ratio of p-character to s-character is λ2 = 3. The p character or the weight of the p component is N2λ2 = 3/4.

Hybridisation describes the bonding of atoms from an atom's point of view. For a tetrahedrally coordinated carbon (e.g., methane CH4), the carbon should have 4 orbitals with the correct symmetry to bond to the 4 hydrogen atoms.

Quantum mechanically, the lowest energy is obtained if the four bonds are equivalent, which requires that they are formed from equivalent orbitals on the carbon. A set of four equivalent orbitals can be obtained that are linear combinations of the valence-shell (core orbitals are almost never involved in bonding) s and p wave functions, which are the four sp3 hybrids.

Other carbon compounds and other molecules may be explained in a similar way. For example, ethene (C2H4) has a double bond between the carbons.

For this molecule, carbon sp2 hybridises, because one π (pi) bond is required for the double bond between the carbons and only three σ bonds are formed per carbon atom. In sp2 hybridisation the 2s orbital is mixed with only two of the three available 2p orbitals, usually denoted 2px and 2py. The third 2p orbital (2pz) remains unhybridised.

forming a total of three sp2 orbitals with one remaining p orbital. In ethylene (ethene) the two carbon atoms form a σ bond by overlapping one sp2 orbital from each carbon atom. The π bond between the carbon atoms perpendicular to the molecular plane is formed by 2p–2p overlap. Each carbon atom forms covalent C–H bonds with two hydrogens by s–sp2 overlap, all with 120° bond angles. The hydrogen–carbon bonds are all of equal strength and length, in agreement with experimental data.

The chemical bonding in compounds such as alkynes with triple bonds is explained by sp hybridization. In this model, the 2s orbital is mixed with only one of the three p orbitals, 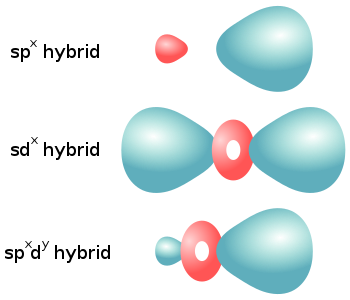 Shapes of the different types of hybrid orbitals

Hybridisation helps to explain molecule shape, since the angles between bonds are approximately equal to the angles between hybrid orbitals. This is in contrast to valence shell electron-pair repulsion (VSEPR) theory, which can be used to predict molecular geometry based on empirical rules rather than on valence-bond or orbital theories.

As the valence orbitals of main group elements are the one s and three p orbitals with the corresponding octet rule, spx hybridization is used to model the shape of these molecules.

As the valence orbitals of transition metals are the five d, one s and three p orbitals with the corresponding 18-electron rule, spxdy hybridisation is used to model the shape of these molecules. These molecules tend to have multiple shapes corresponding to the same hybridization due to the different d-orbitals involved. A square planar complex has one unoccupied p-orbital and hence has 16 valence electrons.

In certain transition metal complexes with a low d electron count, the p-orbitals are unoccupied and sdx hybridisation is used to model the shape of these molecules.

In some general chemistry textbooks, hybridization is presented for main group coordination number 5 and above using an "expanded octet" scheme with d-orbitals first proposed by Pauling. However, such a scheme is now considered to be incorrect in light of computational chemistry calculations.

In 1990, Eric Alfred Magnusson of the University of New South Wales published a paper definitively excluding the role of d-orbital hybridisation in bonding in hypervalent compounds of second-row (period 3) elements, ending a point of contention and confusion. Part of the confusion originates from the fact that d-functions are essential in the basis sets used to describe these compounds (or else unreasonably high energies and distorted geometries result). Also, the contribution of the d-function to the molecular wavefunction is large. These facts were incorrectly interpreted to mean that d-orbitals must be involved in bonding.

Although ideal hybrid orbitals can be useful, in reality, most bonds require orbitals of intermediate character. This requires an extension to include flexible weightings of atomic orbitals of each type (s, p, d) and allows for a quantitative depiction of the bond formation when the molecular geometry deviates from ideal bond angles. The amount of p-character is not restricted to integer values; i.e., hybridizations like sp2.5 are also readily described.

The hybridization of bond orbitals is determined by Bent's rule: "Atomic character concentrates in orbitals directed towards electropositive substituents".

For molecules with lone pairs, the bonding orbitals are isovalent spx hybrids. For example, the two bond-forming hybrid orbitals of oxygen in water can be described as sp4.0 to give the interorbital angle of 104.5°. This means that they have 20% s character and 80% p character and does not imply that a hybrid orbital is formed from one s and four p orbitals on oxygen since the 2p subshell of oxygen only contains three p orbitals. The shapes of molecules with lone pairs are:

In such cases, there are two mathematically equivalent ways of representing lone pairs. They can be represented by orbitals of sigma and pi symmetry similar to molecular orbital theory or by equivalent orbitals similar to VSEPR theory.

Hybridisation of s and p orbitals to form effective spx hybrids requires that they have comparable radial extent. While 2p orbitals are on average less than 10% larger than 2s, in part attributable to the lack of a radial node in 2p orbitals, 3p orbitals which have one radial node, exceed the 3s orbitals by 20–33%. The difference in extent of s and p orbitals increases further down a group. The hybridisation of atoms in chemical bonds can be analysed by considering localised molecular orbitals, for example using natural localised molecular orbitals in a natural bond orbital (NBO) scheme. In methane, CH4, the calculated p/s ratio is approximately 3 consistent with "ideal" sp3 hybridisation, whereas for silane, SiH4, the p/s ratio is closer to 2. A similar trend is seen for the other 2p elements. Substitution of fluorine for hydrogen further decreases the p/s ratio. The 2p elements exhibit near ideal hybridisation with orthogonal hybrid orbitals. For heavier p block elements this assumption of orthogonality cannot be justified. These deviations from the ideal hybridisation were termed hybridisation defects by Kutzelnigg.

One misconception concerning orbital hybridization is that it incorrectly predicts the ultraviolet photoelectron spectra of many molecules. While this is true if Koopmans' theorem is applied to localized hybrids, quantum mechanics requires that the (in this case ionized) wavefunction obey the symmetry of the molecule which implies resonance in valence bond theory. For example, in methane, the ionised states (CH4+) can be constructed out of four resonance structures attributing the ejected electron to each of the four sp3 orbitals. A linear combination of these four structures, conserving the number of structures, leads to a triply degenerate T2 state and an A1 state. The difference in energy between each ionized state and the ground state would be ionization energy, which yields two values in agreement with the experiment.

Bonding orbitals formed from hybrid atomic orbitals may be considered as localized molecular orbitals, which can be formed from the delocalized orbitals of molecular orbital theory by an appropriate mathematical transformation. For molecules in the ground state, this transformation of the orbitals leaves the total many-electron wave function unchanged. The hybrid orbital description of the ground state is, therefore equivalent to the delocalized orbital description for ground state total energy and electron density, as well as the molecular geometry that corresponds to the minimum total energy value.

Molecules with multiple bonds or multiple lone pairs can have orbitals represented in terms of sigma and pi symmetry or equivalent orbitals. Different valence bond methods use either of the two representations, which have mathematically equivalent total many-electron wave functions and are related by a unitary transformation of the set of occupied molecular orbitals.

For multiple bonds, the sigma-pi representation is the predominant one compared to the equivalent orbital (bent bond) representation. In contrast, for multiple lone pairs, most textbooks use the equivalent orbital representation. However, the sigma-pi representation is also used, such as by Weinhold and Landis within the context of natural bond orbitals, a localized orbital theory containing modernized analogs of classical (valence bond/Lewis structure) bonding pairs and lone pairs. For the hydrogen fluoride molecule, for example, two F lone pairs are essentially unhybridized p orbitals, while the other is an spx hybrid orbital. An analogous consideration applies to water (one O lone pair is in a pure p orbital, another is in an spx hybrid orbital).