Monegasque order of merit
Not to be confused with the Mexican Imperial Order of Saint Charles (created 1866).

Grand Officer insignia of the Order of Saint Charles

The Order of Saint Charles (French: Ordre de Saint Charles) is a dynastic order of knighthood established in Monaco on 15 March 1858.

This order rewards service to the State or Prince. In particular cases, it may be granted to foreigners. It is awarded by the current Sovereign, Prince Albert II.

Except for Members of the Princely Family and foreigners, one can only receive the Order first with the rank of Knight. To be awarded the following higher ranks, one must keep the lower rank for a set length of time:

Nominations belong to the Sovereign. The Chancellor proposes promotions. According to the Prince's orders, the Chancellor proposes the projects of nomination and promotion ordonnances. The grantees must be received in the Order before wearing the decorations. The Grand-Master receives the Grand Crosses, Grand Officers and Commanders. The Chancellor receives the Officers and Knights. Foreigners are admitted to the Order, but not received.

The Knight Grand Cross wears the badge of the order on a sash and the star of the order on the left of the breast. There is a golden necklet that is attached to the Order. It has small empty egg-shaped sections that form the necklet. The badge is sometimes worn attached to this collar instead of the sash.

Star of the Order

The Commander of the Order of St. Charles wears the badge on a ribbon around the neck or on a bow on the left shoulder. 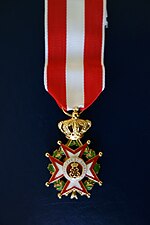 Knight cross of the Order of St Charles

The Knight of the Order of St. Charles wears the badge of the order on a chest ribbon without rosette.

Retrieved from "https://en.wikipedia.org/w/index.php?title=Order_of_Saint-Charles&oldid=1004231867"
Uses material from the Wikipedia article Order of Saint-Charles, released under the CC BY-SA 3.0 license.