Order of the Crown (Belgium)

The Order of the Crown (French: Ordre de la Couronne, Dutch: Kroonorde) is a national order of the Kingdom of Belgium. The Order is one of Belgium's highest honors.

The Order may also be bestowed to foreign nationals and is frequently awarded to military and diplomatic personnel of other countries stationed in (or providing support to) Belgium. During the Second World War, the Order of the Crown was extensively authorized for award to Allied military personnel who had helped to liberate Belgium from the occupation forces of Nazi Germany.

The Order of the Crown is awarded by royal decree.

The Order of the Crown is awarded in five classes, plus two palms and three medals:

The badge of the Order is a white-enamelled Maltese cross with straight rays, in silver for the Knight class and in gold for the higher classes. The obverse central disc has a gold crown on a blue enamelled background; the reverse central disc has the face-to-face monogram "L" (for King Leopold II) on a blue enamelled background. The badge is suspended from a green-enamelled wreath of laurel and oak leaves.

The medal is round in gold, silver and bronze versions, with a suspension in the form of a royal crown with two pendelia and a ribbon ring. The obverse shows a finely ribbed central area with bead surround, with the royal crown superimposed. The surrounding circlet carries the motto of the Belgian Congo: Travail et Progrès (work and progress) —the later issues are bilingual including the Dutch Arbeid en Vooruitgang in the lower half of the circlet. The reverse is a stylised 'double L' crowned Leopold II monogram within a palm wreath.

Stars, palms, borders or stripes can be awarded together, but these deviations are currently only rarely awarded.

The ribbon of the palms and medals has a vertical white border on both sides as well as a metal pin showing a reduction of the palm or medal.

The ribbon bar of the order, which is worn on the semi-formal dress uniform is:

Despite the fact that, in contrast to the Order of Leopold, no maritime division of the Order of the Crown exists, some unofficial decorations with crossed anchors under the wreath are known to exist.

National orders are awarded by royal decree at fixed dates: 8 April (birthday of King Albert I), 15 November (King's Feast), and in some cases on 21 July (Belgian national holiday) to reward meritorious services to the Kingdom of Belgium based on the career path and age of the recipient. A number of different regulations rule the award of national orders for the various ministries. In addition, the national orders may be awarded by the king for especially meritorious deeds. The royal decrees are published in the Belgian official journal, Moniteur Belge.

For people who are not Belgian, honours are not published in the Moniteur and bestowed all year round by the foreign office. Recent example is the Grand Cross of ambassador Vershbow. 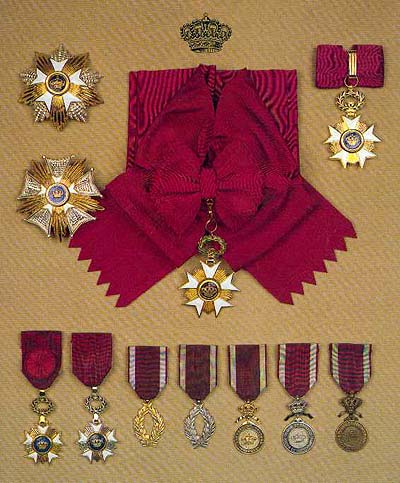 The ministry responsible for foreign affairs, currently the Federal Public Service (SPF/FOD) Foreign Affairs, administers the national orders and the minister has the role of advisor in cases not fitting within a regulation.

For the award of national orders for persons to whom no regulation applies or has been adopted, the number of awards is limited every year by decision of the Council of Ministers (contingent).

Persons who are the subject of criminal proceedings will usually not be awarded a national order until they are declared not guilty.

The Order of the Crown is awarded to military personnel on the basis of their length of service, with the years of training counting for half and the first twelve years of service as member of the flying personnel counting double:

For awards to military personnel, there is no minimum age requirement.

The palms and the medals of the Order of the Crown may be awarded to workers in the private sector or contractual employees of the public sector, as well as some public sector employees such as prison supervisors, ushers, burgomasters, police commissioners, local police officers, or members of town councils.

In addition, the Gold Medal, the Silver Palms and the Golden Palms are awarded to the presidents, secretaries and members of the board of directors of representative trade organisations such as trade unions on the basis of the number of members of the organisation, of the length of their membership of the board, and on the length of their tenure on the board.

The medal could also be awarded without the rigid 'time in service' criteria to administrators, directors, department heads, artisans, architects, chemists, specialist craftsmen, etc., each case for an award assessed on an individual basis.

The bronze medal appears to have been confined mainly to the Caucasian workers of the Belgian Congo or Congo Free State for 11 years service, apart from a period—duration unknown—when it was also used in Belgium to reward firemen and rural guards for 40 years' service.

Grand Crosses of the Order of the Crown

Even though orders from different States are not always easy to compare, the Order of the Crown is roughly equivalent to the following orders from other States.

The other Belgian orders :

Retrieved from "https://en.wikipedia.org/w/index.php?title=Order_of_the_Crown_(Belgium)&oldid=1005672500"
Uses material from the Wikipedia article Order of the Crown (Belgium), released under the CC BY-SA 3.0 license.