The Orthodox Ohrid Archbishopric has been refused registration by the State Religion Commission of North Macedonia on the grounds that one group may be registered for each confession and that the name was not sufficiently distinct from that of the Macedonian Orthodox Church (MOC). MOC is recognized by the State Religion Commission but not by any other Orthodox churches, which consider its unilateral 1967 declaration of autocephaly a breach of canon law.

The Archbishopric claims inheritance from the Ohrid Archbishopric of Justiniana prima and all Bulgaria (Bulgarian: Охридска Архиепископиия на Юстинияна първа и цяла България, Greek: Αρχιεπίσκοπος της πρωτης 'Ιουστινιανης και πάσης Βουλγαριας), established in 1019 by Byzantine Emperor Basil II and abolished in 1767 by the Ottomans. Numerous international organizations have criticized the authorities of North Macedonia for their moves towards the Orthodox Ohrid Archbishopric and Archbishop Jovan VI, questioning the threat to religious freedoms.

In attempt to restore its canonical status and gain recognition from the Orthodox churches, the Macedonian Orthodox Church negotiated with the Serbian Orthodox Church, and these negotiations led to an eventual agreement signed in Niš in June 2002, thus known as the Niš Agreement. The agreement was signed by all bishops of both delegations. However, the bishops of the delegations of the Macedonian Orthodox Church were exposed to severe criticism for signing this agreement, and although they attempted to defend it for a short time, the Synod of the MOC rejected the agreement.

The Serbian Patriarch Pavle then summoned all bishops, clergy, monastics and faithful people to enter in liturgical and canonical unity with the Serbian Orthodox Church. Jovan Vraniškovski, Metropolitan of Veles and Povardarie, and all priests of Veles agreed to respond to this call, and all signed a document of agreement.

On 23 September 2002, Metr. Jovan was appointed Exarch of all the territories of the Ohrid Archdiocese by the Assembly of the Serbian Orthodox Church. On 25 December 2003, he was elected Chairman of the Holy Synod of Bishops of the Orthodox Ohrid Archbishopric, after it had been constituted.

On 24 May 2005, he was confirmed by Serbian Patriarch as Archbishop of Ohrid and Metropolitan of Skopje in accordance with the Niš Agreement. On the same day, there was an announcement of the Patriarchal and the Assembly's Tomos for Autonomy of the Ohrid Archbishopric, with Archbishop Jovan as the Chairman of the Holy Synod of Bishops. 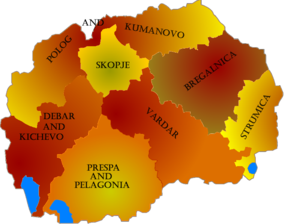 Map of the seven diocese of OOA in North Macedonia

Dioceses on the territory of North Macedonia:

The Holy Synod of bishops was constituted on 23 December 2003 in the monastery of Saint John Chrysostom. The current members of the Synod are:

Upon entering in the canonical and ecclesiastical unity with the Serbian Orthodox Church, and through that with the whole community of Orthodox Churches, Archbishop Jovan was expelled by the police, without a court order, from his residence and cathedra in Veles on 7 July 2002. In the same manner, illegally and without a court order, the monks of four monasteries, were expelled from their monasteries, i.e. homes, in January 2004, immediately after joining the Orthodox Ohrid Archbishopric. A fifth monastery, Saint John Chrysostom in the village Nižepole near Bitola, was broken into by armed and masked men, who not finding the Archbishop Jovan they were after, harassed and threatened the nuns with machine-guns, cut their hair and set the monastery on fire, in February 2004.

Orthodox Ohrid Archbishopric buildings were raided by the police. The Church in the Saint John Chrysostom monastery was demolished by the state authorities on 15 October 2004. The chapel St. Nectarios of Aegina, after being broken into and vandalized on several occasions, was at the end completely demolished on 12 July 2005. The priest who served at that chapel, Fr. Borjan Vitanov, was beaten up twice. Additional complaints of harassment have been reported.

Archbishop Jovan was sentenced to 18 months of prison in June 2005 for Instigation of ethnic, racial and religious hatred, discord and intolerance. The verdict stated the conviction relied on these three points:

He served 220 days in prison before the Supreme court declared the last two of the three points to be unconstitutional and his sentence was shortened to 8 months. Archbishop Jovan was sentenced for the second time, on charges for Embezzlement, and as a second defendant was sentenced to a higher prison term of 2 years than the first defendant (who was sentenced 1 year and 3 months) in 2006. He served 256 days before being released.

The declaratively secular state legalized its identification with a specific religious community Macedonian Orthodox Church, through the Parliament’s "Declaration for support of the autocephaly of the MOC" reached on 23 January 2004. The Orthodox Ohrid Archbishopric is denied registration by the state authorities. Canonical Orthodox clergy are not allowed to enter the country.