Hierarchical outline list of articles related to the physical sciences
"Physical science" redirects here. It is not to be confused with Physics.

Physical science can be described as all of the following:

General principles of the physical sciences

Physics – branch of science that studies matter and its motion through space and time, along with related concepts such as energy and force. Physics is one of the "fundamental sciences" because the other natural sciences (like biology, geology etc.) deal with systems that seem to obey the laws of physics. According to physics, the physical laws of matter, energy and the fundamental forces of nature govern the interactions between particles and physical entities (such as planets, molecules, atoms or the subatomic particles). Some of the basic pursuits of physics, which include some of the most prominent developments in modern science in the last millennium, include:

Astronomy – science of celestial bodies and their interactions in space. Its studies includes the following:

(Note: Astronomy should not be confused with astrology, which assumes that people's destiny and human affairs in general correlate to the apparent positions of astronomical objects in the sky – although the two fields share a common origin, they are quite different; astronomers embrace the scientific method, while astrologers do not.)

Chemistry – branch of science that studies the composition, structure, properties and change of matter. Chemistry is chiefly concerned with atoms and molecules and their interactions and transformations, for example, the properties of the chemical bonds formed between atoms to create chemical compounds. As such, chemistry studies the involvement of electrons and various forms of energy in photochemical reactions, oxidation-reduction reactions, changes in phases of matter, and separation of mixtures. Preparation and properties of complex substances, such as alloys, polymers, biological molecules, and pharmaceutical agents are considered in specialized fields of chemistry. 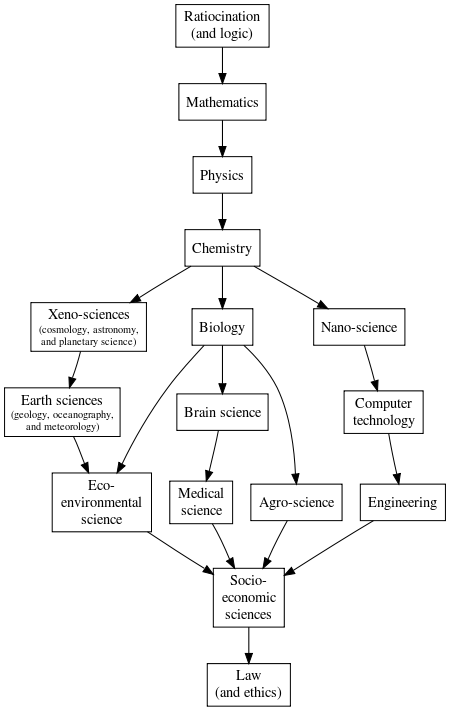 Chemistry, the central science, partial ordering of the sciences proposed by Balaban and Klein.

Earth science – the science of the planet Earth, as of 2018[update] the only identified life-bearing planet. Its studies include the following:

Retrieved from "https://en.wikipedia.org/w/index.php?title=Outline_of_physical_science&oldid=1000328674"
Uses material from the Wikipedia article Outline of physical science, released under the CC BY-SA 3.0 license.