PCA Player of the Year 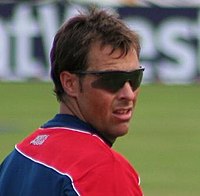 Marcus Trescothick is one of two players to have won the award three times.

The Reg Hayter Cup for the NatWest PCA Player of the Year is an annual cricket award. It is presented to the player who is adjudged to have been the best of the year in English county cricket. The award has been given since the 1970 season and the winner is chosen by a vote amongst the members of the players' trade union, the Professional Cricketers' Association (PCA). With the exception of the first year, when a joint award was made, the award has been bestowed upon one individual each season. The winning player is awarded the Reg Hayter Cup, named after a sports journalist who was also a member of the Marylebone Cricket Club, a Lord's Taverner, and a life-member of Surrey County Cricket Club. The award is well regarded by its recipients; the 2014 winner, Adam Lyth exemplified this by claiming that "it's a very proud moment to be voted for by your peers who you’ve played against all year."

The award was first presented in 1970, when Mike Proctor of Gloucestershire and Jack Bond of Lancashire were joint winners. Seven players have won the award more than once, but only Sir Richard Hadlee (1981, 1984 and 1987) and Marcus Trescothick (2000, 2009 and 2011) have been named Player of the Year on three occasions. Two players, Andrew Flintoff and John Lever, have won the award in consecutive years. Representatives of all eighteen first-class cricket counties have won the award. Gloucestershire players have collected the award most frequently, doing so on six occasions, while four of the counties (Derbyshire, Glamorgan, Leicestershire and Sussex) have only had one winner.

Retrieved from "https://en.wikipedia.org/w/index.php?title=PCA_Player_of_the_Year&oldid=1007888255"
Uses material from the Wikipedia article PCA Player of the Year, released under the CC BY-SA 3.0 license.