The area that is now Palmyra was settled in the late 17th century by Swedes, marking the northernmost border of New Sweden. A farmhouse built in 1761 by the third generation settlers still remains as the oldest house in Palmyra. Farming was the primary use of land in Palmyra and the surrounding area until after the construction of the Camden and Amboy Railroad in 1834 with a station in the area, after which railroad workers built homes on lots they purchased along the railroad right of way. The community was originally known as Texas, but a local landowner, Isaiah Toy, a descendant of the original Swedish settlers and a stockholder in the Camden and Amboy Railroad, who wanted to have a post office established in the community, convinced the railroad to change the name of the station in 1849 to Palmyra, which came from his love of ancient history. Palmyra was the name of an ancient trading center located in central Syria. The post office was established in 1851. Palmyra, along with Bordentown, Burlington, Moorestown Township, and Mount Holly Township, established its high school in the late 1890s, making it one of the oldest high schools in Burlington County and in New Jersey.

The community was laid out in 1850, when Joseph Souder's land was broken up into building lots to pay his debts, with the street names matching those of Center City, Philadelphia - Market, Arch, Race, and Vine (from south to north), and Front Street and numbered streets from the Delaware River. What is now Palmyra was part of Chester Township (now Maple Shade Township), which was created in 1694 and was one of the original 104 townships in New Jersey incorporated in 1798. Palmyra became a part of Cinnaminson Township when that township was set off from Chester in 1860. Palmyra Township was set off from Cinnaminson in 1894, and Palmyra was incorporated as a borough in 1923.

Unincorporated communities, localities and place names located partially or completely within the borough include West Palmyra.

The borough borders Cinnaminson Township and Riverton in Burlington County; Pennsauken Township in Camden County; and Philadelphia, across the Delaware River in Pennsylvania.

The city is connected to the Tacony section of Philadelphia via Route 73 by the Tacony-Palmyra Bridge, which is named for the two communities connected by the bridge. The bridge was completed in 1929 at a cost of $4 million.

In 1999, a 250-acre (100 ha) nature park, Palmyra Nature Cove, was opened along the banks of the Delaware which borders Palmyra on the west; in addition to serving as a bird sanctuary, the park offers educational programs for schools and hiking trails for walkers. The park is open from dawn to dusk; no pets or bicycles are allowed. 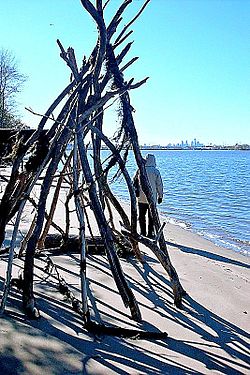 Driftwood along the banks of the Delaware River in Palmyra Nature Cove in Palmyra, NJ

Palmyra is governed under the Borough form of New Jersey municipal government, which is used in 218 municipalities (of the 565) statewide, making it the most common form of government in New Jersey. The governing body is comprised of a Mayor and a Borough Council, with all positions elected at-large on a partisan basis as part of the November general election. A Mayor is elected directly by the voters to a four-year term of office. The Borough Council is comprised of six members elected to serve three-year terms on a staggered basis, with two seats coming up for election each year in a three-year cycle. The Borough form of government used by Palmyra is a "weak mayor / strong council" government in which council members act as the legislative body with the mayor presiding at meetings and voting only in the event of a tie. The mayor can veto ordinances subject to an override by a two-thirds majority vote of the council. The mayor makes committee and liaison assignments for council members, and most appointments are made by the mayor with the advice and consent of the council.

In February 2020, Dr. Laura Craig Cloud was sworn in to fill the seat expiring in December 2020 that was vacated by Gina Tait when she resigned her seat to take office as mayor the previous month. In February 2016, the Borough Council selected Edward Kearney from a list of three candidates nominated by the Republican municipal committee to fill the council seat expiring in December 2016 that became vacant when Michelle Arnold took office as mayor.

In October 2015, the Borough Council selected Bryan Norcross to fill the vacant seat expiring in December 2016 of Adam Nowicki, who had resigned from office the previous month.

Gina Ragomo Tait was appointed in February 2013 to serve until the November general election, filling the seat of Council President Kenneth Brahl, who had resigned during the previous month due to work and education obligations.

Palmyra is located in the 1st Congressional District and is part of New Jersey's 7th state legislative district.

For the 2018–2019 session (Senate, General Assembly), the 7th Legislative District of the New Jersey Legislature is represented in the State Senate by Troy Singleton (D, Palmyra) and in the General Assembly by Herb Conaway (D, Moorestown) and Carol A. Murphy (D, Mount Laurel).

Burlington County is governed by a board of chosen freeholders, whose five members are elected at-large in partisan elections to three-year terms of office on a staggered basis, with either one or two seats coming up for election each year; at an annual reorganization meeting, the board selects a director and deputy director from among its members. As of 2018[update], Burlington County Board of Chosen Freeholders are Director Kate Gibbs (R, Lumberton Township, term as freeholder and as director ends December 31, 2018), Deputy Director Linda Hughes (R, Evesham Township, term as freeholder and as deputy director ends 2018) Tom Pullion (D, Edgewater Park, 2020), Balvir Singh (D, Burlington Township, 2020), and Latham Tiver (R, Southampton Township, 2019). Burlington County's Constitutional Officers are County Clerk Tim Tyler (R, Fieldsboro, 2018), Sheriff Jean E. Stanfield (R, Westampton, 2019) and Surrogate Mary Ann O'Brien (R, Medford, 2021).

The Palmyra Public Schools serves students in pre-kindergarten through twelfth grade from Palmyra, along with those from Beverly and Riverton who attend the district's high school as part of sending/receiving relationships. As of the 2018–19 school year, the district, comprised of two schools, had an enrollment of 953 students and 79.0 classroom teachers (on an FTE basis), for a student–teacher ratio of 12.1:1. Schools in the district (with 2018–19 enrollment from the National Center for Education Statistics) are: Charles Street Elementary School with 457 students in grades PreK-6 and Palmyra Middle School / Palmyra High School with 468 students in grades 7-12

Students from Palmyra, and from all of Burlington County, are eligible to attend the Burlington County Institute of Technology, a countywide public school district that serves the vocational and technical education needs of students at the high school and post-secondary level at its campuses in Medford and Westampton Township.

View of Tacony-Palmyra Bridge between Palmyra, NJ and Philadelphia, PA

Route 73 traverses the borough, connecting to the Burlington County Bridge Commission-operated Tacony-Palmyra Bridge at the roadway's northern terminus and interchanging with County Route 543, most of which is called Broad Street within Palmyra.

The Palmyra station on NJ Transit's River Line light rail system is located on East Broad Street. The station opened on March 15, 2004. Southbound service from the station is available to Camden, including a transfer to the PATCO Speedline available at the Walter Rand Transportation Center. Northbound service is available to the Trenton Rail Station with connections to NJ Transit trains to New York City, SEPTA trains to Philadelphia, and Amtrak trains.

NJ Transit provides bus service in the borough on the 419 route that runs between Camden and Burlington.

People who were born in, residents of, or otherwise closely associated with Palmyra include: