Paracas National Reserve is a protected area located in the region of Ica, Peru and protects desert and marine ecosystems for their conservation and sustainable use. There are also archaeological remains of the Paracas culture inside the reserve.

The reserve is located in the region of Ica, 250 km south of Lima, and a few kilometers from the town of Pisco. It spans an area of 335,000 hectares, 65% of which correspond to marine ecosystems. The highest elevation in the reserve is 786 m.

Paracas National Reserve is an arid zone, with intense local winds known as paracas. Precipitation is scarce and occurs in winter, falling mostly on the top of the highest hills, which is vital to the lomas ecosystem. The following climograph corresponds to the nearby town of Pisco (19 m of elevation).

Birds found in the reserve include: the Andean condor, the Chilean flamingo, the spotted sandpiper, the oasis hummingbird, the Peruvian pelican, the Inca tern, the black skimmer, the Humboldt penguin, the guanay cormorant, the Peruvian thick-knee, the Andean swift, the Peruvian diving petrel, etc.

Fish found in the reserve include: the Peruvian hake, the flathead grey mullet, the skipjack tuna, the blue flyingfish, the humpback smooth-hound, the copper shark, the Peruvian anchoveta, the eastern Pacific bonito, the Peruvian eagle ray, the fine flounder, the blue shark, the corvina, the bigeye tuna, etc.

There are more than 100 archaeological sites identified inside the reserve, many of them of the Paracas culture, known especially for their textile crafts.

Beach tourism and wildlife observation are the main activities in the reserve. 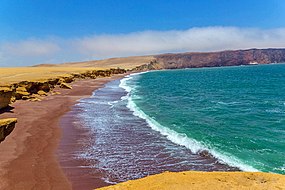