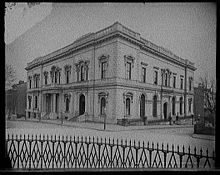 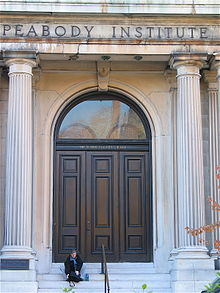 The Peabody Institute of The Johns Hopkins University (JHU) is a music and dance conservatory and university-preparatory school in the Mount Vernon-Belvedere neighborhood of Baltimore, Maryland, United States, facing the landmark Washington Monument circle at the southeast corner of North Charles and East Monument Streets (also known as intersection of Mount Vernon Place and Washington Place).

The Peabody Institute was founded in 1857 and opened in 1866 by merchant/ financier and philanthropist George Peabody, (1795–1869), and is the oldest conservatory in the United States. Its association with JHU in recent decades, begun in 1977, allows students to do research across disciplines.

George Peabody, (1792-1869), founded the Institute with a bequest of about $800,000 from his fortune made initially in Massachusetts and later augmented in Baltimore, (where he lived/worked from 1815 to 1835) and vastly increased in banking and finance during following residences in New York City and London, where he became the wealthiest American of his times.

Completion of the white marble Grecian-Italianate west wing / original building housing the Institute, designed by Edmund George Lind, was delayed by the Civil War. It was dedicated in 1866, with Peabody himself, traveling across the North Atlantic Ocean, speaking at the ceremonies on the front steps in front of landmark Washington Monument circle before a large audience of notaries and citizens including hundreds of assembled pupils from the Baltimore City Public Schools. Under the direction of well-known musicians, composers, conductors, and Peabody alumni, the conservatory, concerts, lecture series, library and art gallery, led by men of literary and intellectual lights along with an annual awarding of gold, silver and bronze medals with certificates and cash prizes to top graduates of the city, known as the "Peabody Prizes", attracted a considerable national attention to the Institute and the city's growing culture. Under strong academic leadership, the Peabody evolved into an internationally renowned cultural and literary center through the late 19th and the 20th centuries, especially after a major expansion in 1877-1878, with the completion of its eastern half housing the George Peabody Library with iconic five stacked tiers of wrought iron balconies holding book stacks/shelves, surmounted by a beveled glass skylight, one of the most beautiful and distinctive libraries in America.

The Institute building's 1878 east wing on East Mount Vernon Place containing the affiliated George Peabody Library, joined the other rows of architecturally significant structures of townhouses, mansions, art gallery, clubs, hotels, churches around the Nation's first memorial to its first President which developed into the Mount Vernon-Belvedere neighborhood, carved from the rolling hills north of Baltimore Town on the estate and nearby mansion of "Belviedere", home of Revolutionary War commander of famous "Maryland Line" troops in the Continental Army, Colonel John Eager Howard, (1752-1827). The Institute grew from a local academy, with an art and sculpture gallery, public lecture series, and the extensive non-circulating reference library which predated the later first public library system in America. That library was created and endowed in 1882 by Peabody's friend and fellow "Bay-Stater", merchant/philanthropist Enoch Pratt, (1808–1896). (In turn, both Peabody and Pratt inspired steel industrialist and multi-millionaire Andrew Carnegie, (1835–1919) of Pittsburgh, Pennsylvania, who endowed more than 2,500 libraries and buildings across America).

In 1978, "The Peabody" began working with The Johns Hopkins University (founded by will/bequest by another extremely wealthy merchant, Johns Hopkins, (1792-1873) in 1876), under an affiliation agreement. In 1985, the Institute officially became a division of "The Hopkins".

Peabody is one of 156 schools in the United States that offers a Doctorate of Musical Arts degree. It houses two libraries: the historical George Peabody Library (originally the Peabody Institute Library) established when the Institute opened in 1866, renowned for its collection of 19th-century era and other rare books and the Arthur Friedheim Library (named for Russian-born pianist/conductor Arthur Friedheim,1859-1932), a separate music reference academic library added to supplement the Institute's original library (now the separate George Peabody Library in the east wing) that includes more than 100,000 books, scores, and sound recordings.

The Conservatory was later supplemented by a preparatory school ("Peabody Prep"), and an auditorium/music hall. Under instructions from Peabody's original 1857 bequest - an art and sculpture gallery, non-circulating public research library, with a public lecture series, and a system of awarding gold, silver and bronze medals, and certificates with money prizes for top honor graduates of Baltimore's then only public secondary schools; (the all-male Central High School of Baltimore, founded 1839 (now The Baltimore City College, since 1868) and female Eastern and Western High Schools, founded 1844). "Peabody Prizes" are awarded to top high school graduates beginning the following year at commencement exercises and continued for 122 years as an honored annual tradition with public announcements to city's media. Additional structures to the south and east of somewhat jarring modernistic light tan/brown brick along East Centre Street and Saint Paul Street (with a street-level parking garage) were constructed in 1971 with two corner towers. During the early 1990s, several remaining townhouses on East Mount Vernon Place to the east intersection with St. Paul were acquired and rebuilt leaving their front original facades facing the historic Monument squares /pocket parks but rebuilt interiors and extended to the rears. Along with other townhouses acquired to the south with distinctive iron scrollwork balconies facing North Charles Street /south Washington Place, for a senior citizens hostel. This enabled The Peabody to round out its tight campus of attached buildings on the entire city block bounded by Charles, Mount Vernon Place, St. Paul and Centre Streets.

The Peabody Children's Chorus is for children ages 6 to 18. It is divided into three groups: Training Choir, Choristers, and Cantate, grouped by age in ascending order. They practice weekly in Towson or Columbia, Maryland, and sing in concerts biannually under the instruction of Doreen Falby, Bradley Permenter, and Julia Sherriff. Cantate, ages 12 to 18, frequently perform with other groups, such as the Baltimore Symphony Orchestra, The Baltimore Chamber Orchestra, The Mid-Atlantic Symphony Orchestra, and the Baltimore Choral Arts Society, and have toured both regionally and internationally.