A family of mammals belonging to even-toed ungulates

A peccary (also javelina or skunk pig) is a medium-sized pig-like hoofed mammal of the family Tayassuidae (New World pigs). They are found throughout Central and South America and in the southwestern area of North America. They usually measure between 90 and 130 cm (2 ft 11 in and 4 ft 3 in) in length, and a full-grown adult usually weighs about 20 to 40 kg (44 to 88 lb).

Peccaries are social creatures living in large or small herds. They eat roots, grubs, and a variety of foods. They can identify each other by their strong odors. A group of peccaries that travel and live together is called a "squadron". A squadron of peccaries averages between six and nine members.

They are often confused with feral domestic pigs of the old world (family Suidae), commonly known as "razorback" hogs in many parts of the US, when the two pig species occur in the wild in similar ranges.

Mayans kept herds of peccaries, using them in rituals and for food. They are kept as pets in many countries, in addition to being raised on farms as a source of food.

The word "peccary" is derived from the Carib word pakira or paquira.

In Portuguese, a peccary is called pecari, porco-do-mato, queixada, or tajaçu, among other names. In Spanish, it is called javelina, jabalí (a word also used to describe wild boar), sajino, or pecarí. The word "javelina" derives from the Spanish word for "wild boar". In French Guiana and Suriname, the animal is called pakira.

The scientific name Tayassuidae derives the same source as the Portuguese tajaçu. 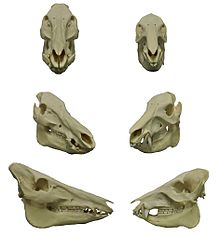 Skulls of wild boar (left) and white-lipped peccary (right): Note how the upper canines of the peccary point downwards.

A peccary is a medium-sized animal, with a strong resemblance to a pig. Like a pig, it has a snout ending in a cartilaginous disc, and eyes that are small relative to its head. Also like a pig, it uses only the middle two digits for walking, although, unlike pigs, the other toes may be altogether absent. Its stomach is not ruminating, although it has three chambers, and is more complex than those of pigs.

Peccaries are omnivores and will eat insects, grubs, and occasionally small animals, although their preferred foods consist of roots, grasses, seeds, fruit, and cacti—particularly prickly pear. Pigs and peccaries can be differentiated by the shape of the canine tooth, or tusk. In European pigs, the tusk is long and curves around on itself, whereas in peccaries, the tusk is short and straight. The jaws and tusks of peccaries are adapted for crushing hard seeds and slicing into plant roots, and they also use their tusks for defending against predators. The dental formula for peccaries is: 2.1.3.33.1.3.3

By rubbing the tusks together, they can make a chattering noise that warns potential predators to stay away. In recent years in northwestern Bolivia near Madidi National Park, large groups of peccaries have been reported to have seriously injured or killed people.

Peccaries are social animals, often forming herds. Over 100 individuals have been recorded for a single herd of white-lipped peccaries, but collared and Chacoan peccaries usually form smaller groups. Such social behavior seems to have been the situation in extinct peccaries, as well. The recently discovered giant peccary (Pecari maximus) of Brazil appears to be less social, primarily living in pairs. Peccaries rely on their social structure to defend territory, protect against predators, regulate temperature, and interact socially.

Peccaries have scent glands below each eye and another on their backs, though these are believed to be rudimentary in P. maximus. They use the scent to mark herd territories, which range from 30 to 280 hectares (75 to 700 acres). They also mark other herd members with these scent glands by rubbing one against another. The pungent odor allows peccaries to recognize other members of their herd, despite their myopic vision. The odor is strong enough to be detected by humans, which earns the peccary the nickname of "skunk pig".

Three (possibly four) living species of peccaries are found from the Southwestern United States through Central America and into South America and Trinidad.

The collared peccary (Pecari tajacu) or "musk hog", referring to the animal's scent glands, occurs from the Southwestern United States into South America and the island of Trinidad. The coat consists of wiry peppered black, gray, and brown hair with a lighter colored "collar" circling the shoulders. They bear young year-round, but most often between November and March, with the average litter size consisting of two to three offspring. They are found in many habitats, from arid scrublands to humid tropical rain forests. The collared peccary is well-adapted to habitat disturbed by humans, merely requiring sufficient cover. They can be found in cities and agricultural land throughout their range. Notable populations exist in the suburbs of Phoenix and Tucson, Arizona, where they feed on ornamental plants and other cultivated vegetation. There are also urban populations as far north as Prescott, Arizona, where they have been known to fill a niche similar to raccoons and other urban scavengers. In Arizona they are often called by their Spanish name "javelinas". Collared peccaries are generally found in bands of 8 to 15 animals of various ages. They defend themselves if they feel threatened, but otherwise tend to ignore humans.

A second species, the white-lipped peccary (Tayassu pecari), is mainly found in rainforests of Central and South America, but also known from a wide range of other habitats such as dry forests, grasslands, mangrove, cerrado, and dry xerophytic areas. The two main threats to their survival are deforestation and hunting.

The third species, the Chacoan peccary (Catagonus wagneri), is the closest living relative to the extinct Platygonus pearcei. It is found in the dry shrub habitat or Chaco of Paraguay, Bolivia, and Argentina. The Chacoan peccary has the distinction of having been first described based on fossils and was originally thought to be an extinct species. In 1975, the animal was discovered in the Chaco region of Paraguay. The species was well known to the native people.

A fourth as yet unconfirmed species, the giant peccary (Pecari maximus), was described from the Brazilian Amazon and north Bolivia by Dutch biologist Marc van Roosmalen. Though relatively recently discovered, it has been known to the local Tupi people as caitetu munde, which means "great peccary which lives in pairs". Thought to be the largest extant peccary, it can grow to 1.2 m (3 ft 11 in) in length. Its pelage is completely dark gray, with no collars whatsoever. Unlike other peccaries, it lives in pairs, or with one or two offspring. However, the scientific evidence for considering it as a species separate from the collared peccary has later been questioned, leading the IUCN to treat it as a synonym.

Peccaries first appeared in the fossil records of the Late Eocene or Early Oligocene periods in Europe. Fossils have later been found in all continents except Australia and Antarctica. Peccaries became extinct in the Old World sometime after the Miocene period, possibly because of competition from evolving pigs. Extinct genera include the Miocene-aged Macrogenis and Floridachoerus. Simojovelhyus, known from a lower partial mandible with three molars from late Oligocene strata near the town of Simojovel in Chiapas, Mexico, was originally described as a helohyid.

Although common in South America today, peccaries did not reach there until about three million years ago during the Great American Interchange, when the Isthmus of Panama formed, connecting North America and South America. At that time, many North American animals—including peccaries, llamas and tapirs—entered South America, while some South American species, such as the ground sloths and opossums, migrated north. Several species of peccary across the genera Platygonus and Mylohyus remained in North America until their extinction following the colonization of the continent by humans via Beringia at the end of the Pleistocene. Today, 2 of the 3 species are relegated to the Neotropical realm, but the collared peccary ranges into northern Mexico and the southwestern United States.

Peccaries bear a superficial resemblance to pigs and are in the same subfamily Suinae as swine, and have been present in South America since prehistoric times. The earliest scientific description of peccaries in the New World is in Brazil in 1547 and referred to them as "wild pigs."

It has been documented that peccaries were tamed, penned, and raised for food and ritual purposes in the Yucatan, Panama, the southern Caribbean, and Colombia at the time of the Conquest. Archaeological remains of peccaries have been found in Mesoamerica from the Preclassic (or Formative) period up until immediately before Spanish contact. Specifically, peccary remains have been found at Early Formative Olmec civilization sites.

The peccary is not readily suitable for modern captive breeding, lacking suitable characteristics for intensive or semi-intensive systems. Peccaries require higher age for parturition and have a tendency towards infanticide.

Retrieved from "https://en.wikipedia.org/w/index.php?title=Peccary&oldid=1005930026"
Uses material from the Wikipedia article Peccary, released under the CC BY-SA 3.0 license.