Most of the portion of PA 532 south of Feasterville was chartered as the Bustleton and Somerton Turnpike in 1840. This road in Philadelphia became known as Bustleton Avenue in 1903. PA 532 was designated in 1928 to run from US 1 in Northeast Philadelphia to PA 32 in Yardley while PA 632 was designated on the route between Newtown and Washington Crossing. In 1946, PA 532 was rerouted to Washington Crossing, replacing PA 632, while the road between Newtown and Yardley became an extension of PA 332. The Newtown Bypass was built in 1977 and PA 532 was routed onto it in 1991.

PA 532 begins at an intersection with US 1 (Roosevelt Boulevard) in the Northeast Philadelphia section of the city of Philadelphia in Philadelphia County, heading north-northwest on two-lane undivided Welsh Road. The road passes through residential areas before running past businesses. The route briefly becomes Old Bustleton Avenue before it turns northeast onto Bustleton Avenue, a four-lane undivided road with some segments having a center left-turn lane. PA 532 crosses Grant Avenue and continues through areas of homes and businesses in the Bustleton neighborhood, curving north and coming to a bridge over CSX's Trenton Subdivision. The road runs past more houses, businesses and apartments, crossing PA 63. The route passes to the west of George Washington High School and continues through more developed areas, heading northeast into the Somerton neighborhood. PA 532 crosses Byberry Road and continues north, coming to a bridge over SEPTA's West Trenton Line west of the Somerton station. The route crosses Philmont Avenue and curves northeast, reaching an intersection with County Line Road.

PA 532 northbound past PA 132 in Feasterville

Upon crossing County Line Road, PA 532 enters Bucks County in Lower Southampton Township, where the name of the road changes to Bustleton Pike. The route heads north as a five-lane road with a center left-turn lane, passing through suburban business areas with nearby residential areas. The road comes to a bridge over the Pennsylvania Turnpike (Interstate 276) and continues to an intersection with PA 132 in Feasterville. Past this intersection, PA 532 passes more commercial establishments and splits from Bustleton Pike by turning northeast onto four-lane undivided Bridgetown Pike. A short distance later, PA 532 turns north onto two-lane undivided Buck Road, with PA 213 continuing along Bridgetown Pike. PA 532 curves northeast and passes through wooded residential areas. The road enters Northampton Township and passes under Norfolk Southern's Morrisville Line before heading past businesses in the community of Holland. At an intersection with Old Bristol Road, the route curves to the north before crossing Mill Creek and Ironworks Creek near their confluence and turning northeast at an intersection with Holland Road. PA 532 passes through areas of wooded residential subdivisions, crossing Pine Run and heading to the east of Council Rock's Holland Middle School. The road passes under the abandoned Fox Chase/Newtown railroad line before heading into the community of Village Shires, where it runs to the west of the Village Shires Shopping Center. After passing through Village Shires, the route crosses the Neshaminy Creek and enters Newtown Township. Here, PA 532 widens into a four-lane road and passes more residential subdivisions before coming to an intersection with PA 332/PA 413. 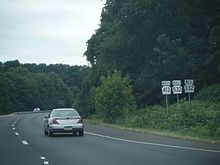 At this point, PA 532 turns northwest and joins PA 332/PA 413 on the four-lane divided Newtown Bypass, with Sycamore Street continuing northeast into the borough of Newtown. The bypass turns north and passes through wooded areas with nearby residential development. PA 332 splits from the Newtown Bypass by heading west on Richboro Road while PA 413/PA 532 continue to the north on the bypass. The roadway passes over an access road to Council Rock High School North before it heads to the east of Tyler State Park, curving to the northwest. At the entrance to the park, PA 413/PA 532 turn northeast to remain on the Newtown Bypass while Swamp Road heads to the northwest. The road passes between a residential development to the northwest and a shopping center to the southeast before the Newtown Bypass ends at an intersection with Durham Road, at which point PA 413 heads north on Durham Road and PA 532 heads east on Durham Road. The route narrows to a two-lane undivided road and comes to another intersection with Sycamore Street. 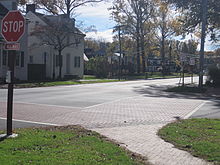 At this point, PA 532 turns north and runs along Washington Crossing Road, passing through a mix of woods and residential neighborhoods. The road curves to the northeast and crosses Newtown Creek. The route heads into a mix of fields and woodland with some residences, crossing into Lower Makefield Township. At the Stoopville Road intersection, PA 532 turns east and runs along the border between Upper Makefield Township to the north and Lower Makefield Township, passing to the south of Washington Crossing National Cemetery. The route fully enters Upper Makefield Township and turns north at the Dolington Road intersection in the community of Dolington. The road curves northeast and runs through more areas of farms and woods with occasional homes, crossing Houghs Creek. PA 532 comes to a junction with Taylorsville Road in the community of Taylorsville, at which point the name changes to General Washington Memorial Boulevard. The road crosses the Delaware Canal and runs past homes and businesses. PA 532 reaches its northern terminus at an intersection with PA 32 in the community of Washington Crossing. Past this intersection, the road continues as State Route 2070, an unsigned quadrant route, and heads over the Delaware River on the Washington Crossing Bridge into New Jersey, where the road intersects Route 29 on the other side of the river and becomes County Route 546 past that intersection.

The Bustleton and Somerton Turnpike, a turnpike, was incorporated on April 14, 1840, running through present-day Northeast Philadelphia. In 1872, the Bustleton and Somerton Turnpike was combined with the Richborough and Feasterville Turnpike Road to form one continuous turnpike. The city of Philadelphia approved renaming the Bustleton and Somerton Turnpike within the city to Bustleton Avenue in 1903. When Pennsylvania legislated its state highways in 1911, what would become PA 532 was legislated as part of Legislative Route 252 between Newtown and Yardley. In 1928, PA 532 was designated to run from US 1 in Northeast Philadelphia north to PA 32 in Yardley, following its current alignment to Newtown, where it turned east and ran to Yardley. The portion of the current route between Newtown and Washington Crossing was designated as PA 632.

PA 532 was rerouted to its current alignment between Newtown and Washington Crossing in 1946, replacing PA 632. The former alignment of PA 532 between Newtown and Yardley became an extended PA 332. In 1977, the Newtown Bypass to the west of Newtown was built as part of a bypass of the town for PA 413; PA 532 still continued through Newtown at this time. PA 532 was rerouted to bypass Newtown along with PA 332 in 1991. The former alignment of PA 532 through Newtown followed Sycamore Street. On April 22, 2014, the portion of PA 532 along the Newtown Bypass was renamed the Officer Gregg Memorial Bypass in honor of Brian S. Gregg, a borough of Newtown police officer who was killed in the line of duty on September 29, 2005.

Pennsylvania Route 532 Alternate Truck is a truck route bypassing a weight-restricted bridge over the Delaware Canal in Upper Makefield Township, on which trucks over 29 tons and combination loads over 35 tons are prohibited. Formed in 2013, it follows Taylorsville Road and PA 32.